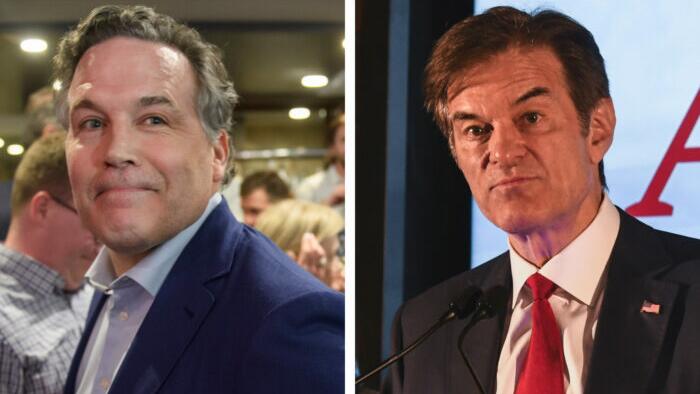 
Authored by Jeff Louderbeck via The Epoch Times,

Surrounded by friends and supporters at the Hotel Indigo in Pittsburgh, David McCormick announced that he was conceding the Pennsylvania GOP U.S. Senate race to Dr. Mehmet Oz.

“We came so close, by the slimmest of margins on election night with thousands of votes outstanding,” McCormick said at the event on June 3 at 6:30 p.m.

“We spent the last 17 days making sure that every Republican vote was counted in a way that resulted in the will of Pennsylvania voters being fulfilled. That is what this process is about.

“I called Mehmet Oz to congratulate him on his victory,” McCormick added.

“It is important that we beat John Fetterman and take back the majority in the Senate. He has my full support.”

For weeks, polls showed that the race was too close to call. Results from primary election day demonstrated that the projection was accurate.

Though he slipped to third in some recent polls and saw former President Donald Trump endorse Oz in April, McCormick carried a slim lead for most of the night in the primary on May 17.

Republican Senatorial Candidate David McCormick and his wife Dina Powell McCormick heads to vote at his polling location on the campus of Chatham University in Pittsburgh, Pa on May 17, 2022. (Jeff Swensen/Getty Images)

In the early hours of May 18, Oz pulled ahead.

Under Pennsylvania law, an automatic recount is triggered when the two leading candidates have a separation within half of 1 percent. McCormick had the option to forego a recount, but he chose to move forward with the procedure.

On May 23, McCormick’s campaign filed suit against Acting Secretary of the Commonwealth Leigh M. Chapman and county boards of elections. The campaign claimed that the boards were not counting absentee and mail-in ballots in the primary election that were received on time and stamped by the county boards but did not include a date on the exterior mailing envelope.

The campaign asked the court to rule that absentee and mail-in ballots received by the deadline “may not be rejected due solely to the lack of a date in the declaration on the exterior envelope.”

The undated mail ballots at issue in the case were “indisputably submitted on time—they were date-stamped upon receipt—and no fraud or irregularity has been alleged,” McCormick’s attorneys argued in the lawsuit.

Late on June 2, a Pennsylvania state court ruled in favor of McCormick, ordering that contested ballots be included in the count.

Pennsylvania state law requires that ballots be rejected if they are received on time but are not accompanied by a handwritten date on the envelope.

His campaign hoped that would benefit McCormick when military ballots were tabulated, but the overall difference proved too much to overcome.

On May 27—the same day Pennsylvania counties could start recounting ballots in the primary—Oz released a video declaring himself “the presumptive Republican nominee.”

“I am blessed to have earned the presumptive Republican nomination for the United States Senate,” Oz said in the video.

“This was a tough campaign, I traveled everywhere. You guys were pretty honest sharing with me thoughts, worries you had; you don’t feel like you’re being heard.”

To accompany the video, Oz wrote on Twitter, “It’s time to unite. I want to hear your ideas and make this country’s future as bright as it has ever been. With more freedom, less big government, and by empowering our people, America’s light will shine brighter than ever.”

Trump endorsed Oz in mid-April. A day after the May 17 primary, the former president posted on his platform, Truth Social, urging Oz to declare victory.

“It makes it much harder for them to cheat with the ballots that ‘they just happened to find,’” Trump said.

Oz will face Fetterman in the general election. Fetterman suffered a stroke a few days before the primary and cast his vote from a hospital on election day before undergoing a successful procedure to implant a pacemaker with a defibrillator. He is still recovering.

The winner in November will replace retiring Republican Sen. Pat Toomey. Since the Senate is currently composed of 50 Republicans and 50 Democrats or nominal independents, every seat is crucial in November because Vice President Kamala Harris casts tiebreaking votes as president of the chamber.

Out of 34 Senate seats up for election, 14 are held by Democrats and 20 by Republicans.