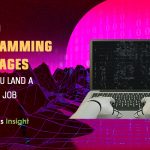 If you are looking for jobs in the Metaverse, you must learn these top 10 programming languages.

The Metaverse is creating a slew of new job prospects for techies, and some of the world’s most powerful and important tech firms are spending big on it. We can be certain that Metaverse will always require engineers, developers, and programmers. There won’t be a single metaverse, but rather a loose collection of metaverse experiences with which you may interact, whether through AR, VR, or a blockchain. Because the Metaverse encompasses so many different aspects of technology and society, one can have a wide breadth of knowledge and a diverse demand for skill sets if they are looking for a metaverse job. Whether you’re coding for augmented reality (AR), virtual reality (VR), or blockchain/cryptocurrency, you’ll need to be familiar with a variety of programming and development languages in order to contribute to the creation of the Metaverse. Here are the top 10 programming languages you need to learn to land a metaverse job.

C++ is a high-level programming language used to build the biggest console and Windows games. It offers a lot of scalabilities and can be used for small and large gaming projects alike. Also it is platform-agnostic, which means you can simply move projects from one OS to another. C++ is surely one of the best programming languages for Metaverse-related jobs. The Witcher 3, Dark Souls, Elder Scrolls V: Skyrim, Player Unknown’s Battlegrounds (PUBG), Fortnite, and more are gaming projects created with C++.

In a game engine like Unity, C# is the programming language that you code in, but C++ is at the engine’s core. C# is one of the best programming languages for Windows and Xbox Games and it would be perfect for your metaverse jobs. Pokemon Go and Super Mario Run are two popular gaming projects developed with C#.

HTML is a popular platform for creating cross-platform and cross-browser applications and games, according to game developers. It can also be utilized interchangeably with JavaScript. HTML is a simple to learn a programming language and does not need extensive programming understanding of algorithms, making it a prominent choice among game designers.

CUDA-C is one of the top programming languages used by game developers to build desktop games. When it comes to gaming, CUDA-C cores make your game appear more realistic by presenting high-resolution visuals that create a profound 3D impression. You will also examine that your games are more lifelike, with better lighting and colors.

As per GameDev Academy, JavaScript is one of the most well-known cornerstones of web development. As the world rapidly moves towards a web-based economy, online games are getting more common. For creating interactive gaming projects, JavaScript, without a doubt, is one of the top programming languages.

Swift is the perfect choice for gaming projects. Developers are intrigued by Swift and want to make use of new features to develop their best games yet. Using SpriteKit, you will learn how to animate sprites and textures. Along the way, you will master physics, animations, and collision effects and how to build the UI aspects of a game.

Cascading Style Sheets is a style sheet language used for describing the presentation of a document written in a markup language such as HTML. CSS is a cornerstone technology of the World Wide Web, alongside HTML and JavaScript. CSS3 is the next generation of cascading stylesheets and much more expands the ability to control the presentation of your site. HTML5 and CSS3 actually make a lot of sense because the two work together to produce the final rendered page. JavaScript file is responsible for the templating and the dynamic elements respectively and in the same position CSS is responsible for one thing and that is style.

The post Top 10 Programming Languages to Help You Land a Metaverse Job appeared first on .