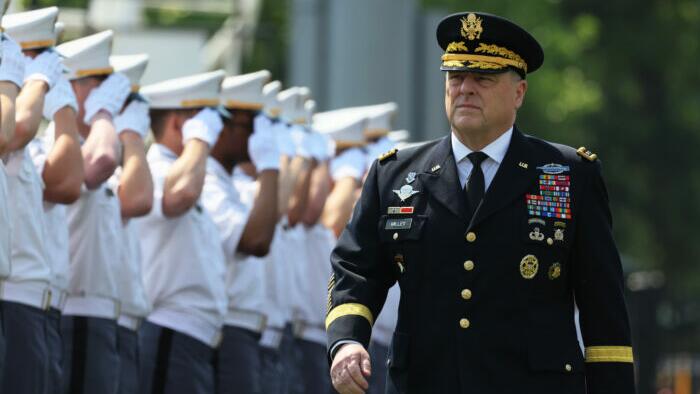 The top U.S. general told the ​​U.S. Military Academy West Point’s class of 2022 that the nature of war is changing and the current rules-based international order is being threatened by Russia and China.

“Right now, at this very moment, a fundamental change is happening in the very character of war,” Chairman of the Joint Chiefs of Staff Gen. Mark Milley said on May 21.

“We are facing, right now, two global powers: China and Russia, each with significant military capabilities, and both fully intend to change the current rules-based order.”

He made the remarks during a speech to the graduating cadets at a commencement ceremony in West Point, New York.

“The world you’re being commissioned into has the potential for significant international conflict between great powers,” Milley said.

“And that potential is increasing, not decreasing.”

He reminded the cadets that Russia’s invasion of Ukraine was a lesson that “aggression left unanswered only emboldens the aggressor.”

As for China, Milley pointed out that the communist regime has a “revisionist foreign policy,” and now boasts an “increasing capable military.”

Details of China’s growing military capabilities were disclosed by the Office of the Director of National Intelligence in its annual threat assessment report (pdf) released in March. One area of concern is China’s ongoing construction of hundreds of new intercontinental ballistic missile silos.

Another concern centers around China’s push to develop space capabilities in order to “erode the U.S. military’s information advantage.” The report states that the communist regime is “fielding new destructive and nondestructive ground- and space-based antisatellite weapons.”

Adm. John Aquilino, commander of U.S. Indo–Pacific Command, in his prepared statement (pdf) for a congressional hearing on May 17, warned about the threat posed by China’s expansion and modernization of its air force, navy, and rocket force.

For instance, China is expected to increase its battle force ships to 420 by 2025, even though the communist regime currently already boasts the largest navy in the world, according to Aquilino. China’s new generation of mobile missiles, some of which rely on hypersonic glide vehicles, is designed to evade U.S missile defenses, he added.

Milley said the character of war has also changed in the kinds of weapons being used.

“The maturity of various technologies that either exist today or are in the advanced stages of development, when combined, are likely to change the character of war just by themselves,” Milley said.

“You’ll be fighting with robotic tanks, ships, and airplanes,” he added. “We’ve witnessed a revolution in lethality and precision munitions. What was once the exclusive province of the U.S. military is now available to most nation states with the money and will to acquire them.”

According to Milley, the mother of all technologies is artificial intelligence (AI), which is resulting in “the most profound change ever in human history.”

In recent years, the Chinese Communist Party (CCP) has repeatedly identified AI as one of the top priorities for its national development. It was one of the key industries outlined in China’s industrial road map known as “Made in China 2025.” Two years later, Beijing rolled out the “New Generation Artificial Intelligence Development,” that sets out strategic goals by 2020, 2025, and 2030.

“China is actively pursuing swarm technologies, which could be used to overwhelm adversary missile defense interceptors,” the report added. Swarm intelligence is having machines communicate and work together to achieve a certain objective.

Milley reminded the cadets that the United States is losing ground militarily.

“Whatever overmatch we, the United States, enjoyed militarily for the last 70 years is closing quickly,” he said. “And the United States will be, in fact, we already are challenged in every domain of warfare in space and cyber, maritime, air, and, of course, land.”

The cadets should be prepared for a future that is different from the past, Milley emphasized.

“Globally, there’s an increase in nationalism and authoritarian governments, regional arms races and unresolved territorial claims, ethnic and sectarian disputes, and an attempt by some countries to return to an 18th-century concept of balance of power politics with spheres of influence,” Milley added, without naming any country.

The CCP is expanding its sphere of influence, particularly over developing countries, through its infrastructure and investment scheme known as the Belt and Road Initiative. At the same time, the communist regime is aiming to take over Taiwan—a de facto independent entity that Beijing considers a part of its territory—in order to expand its sphere of influence in East Asia and the western Pacific.