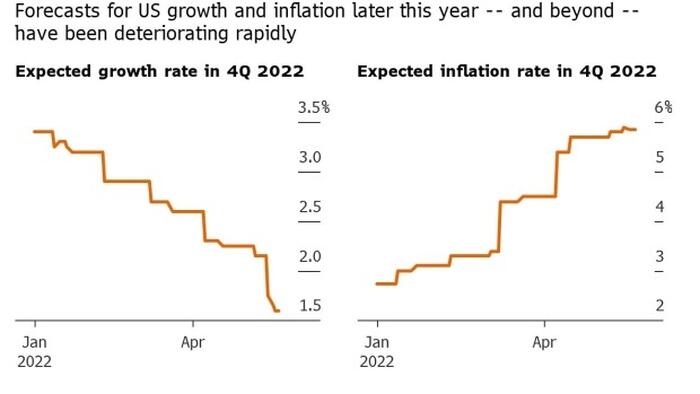 
The signs that the U.S. economy is starting to fall apart are rising to the surface, further indicating that a recession is likely on its way.

In addition to both Target and Walmart plunging this past week on earnings reports that missed Wall Street’s expectations, other indicators that the country is heading toward recession are also starting to surface.

For example, American households are taking on “record amounts of debt”, according to BNN Bloomberg, as higher prices make it tougher for the consumer to pay for staples like gasoline and food. Mortgage rates on the rise are also squeezing the budgets of consumers while businesses both big and small grapple with increased raw material costs.

Ethan Harris, head of global economics research at Bank of America, told Bloomberg: “I don’t think you can have a completely benign soft landing of the economy at this point. We’re either going to have a weak economy or a recession.”

The report notes that many economists believe there is enough momentum and demand in the economy to make it through the end of this year without beginning to falter. But the outlook isn’t as rosy for next year.

Moody’s Analytics chief economist Mark Zandi thinks things could wind up being much worse: “We put the odds that the economy will suffer a downturn beginning in the next 12 months at one in three with uncomfortable near-even odds of a recession in the next 24 months.”

“You can still have quite a strong labor market if unemployment were to move up a few ticks,” Jerome Powell said last week, while talking about the economy. He also said that engineering a “soft landing” may rely on events outside the control of the Fed.

One major key in helping determine the future, of course, will be whether or not the Fed holds course on interest rates.

The slowdown in the economy is also being helped along by the housing market. Mortgage rates have risen at the fastest clip in nearly four decades, the report notes.

Doug Duncan, chief economist at Fannie Mae, said he expects a “modest recession” and sees unemployment rising to 4.4% in 2023.

Goldman Sachs’ Jan Hatzius concluded: “Consumer borrowing supports spending in the short term but ultimately is not going to be a sustainable source of big increases in spending. So it builds in a slowdown, sort of down the road.”

And that’s an iceberg we’re heading straight towards…