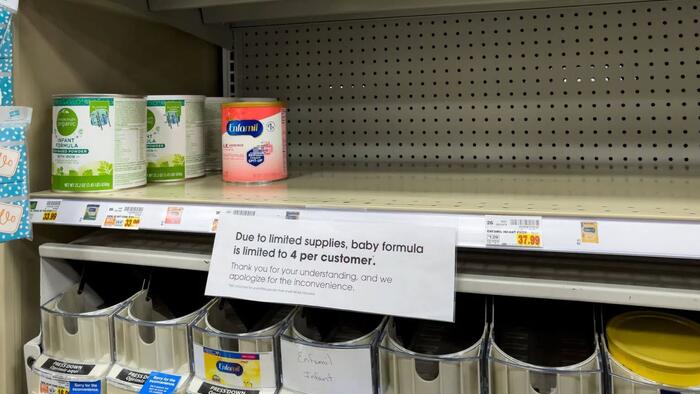 
By Eric Kulisch of FreightWaves

Policy analysts say U.S. trade restrictions, including ones engineered under the Trump administration, along with lean manufacturing practices help explain why stores can’t easily replenish stocks of baby formula. The taxes and extra regulatory hoops make it expensive and difficult to import the specialized baby food.

The U.S. produces 98% of the infant formula it consumes, but that self-sufficiency is being tested by limited availability of ingredients because of supply chain disruptions, labor shortages and the February shutdown of Abbott Laboratories’ (NYSE: ABT) Sturgis, Michigan, plant over contamination concerns.

The nationwide out-of-stock average for baby formula reached 43% for the week ending May 8, according to retail technology firm Datasembly. The Biden administration points to other industry data showing an 80% in-stock rate, but with less variety of products than normal.

The Food and Drug Administration late Monday advised international businesses of new flexibilities allowed in the import process in an effort to increase the availability of infant formula across the country.

Under the relaxed rules, the FDA will not object to the importation of certain infant formula products intended for a foreign market or distribution in the U.S. of products manufactured here for export to foreign countries. It also said it may provide room for domestic companies that manufacture infant formula for export to shift more production for sale in the U.S. market.

High tariffs and policies to protect the U.S. dairy industry from Canadian competitors have kept a lid on infant formula imports and made it difficult, notwithstanding the FDA’s emergency action, for distributors to substitute formula from overseas sources, according to trade experts.

“We’ve reached the point where producers are no longer able to maintain supply and there aren’t other close-at-hand markets that you can turn to,” said Eric Miller, president of Rideau Potomac Strategy Group, an international trade advisory firm based in Washington, in an interview. “The U.S. has basically said our priority is keeping subsidized imports and products made with subsidized inputs out of the U.S. market. So there’s no excess production that’s available and we keep prices high for consumers in the U.S.”

Infant formula is subject to a 17.5% tariff, and imports from some countries can be hit with additional duties above a certain volume threshold.

Canadian dairy products have mostly been kept out of the U.S. market for decades because the U.S. considers them subsidized. The Canadian dairy sector operates under a supply management system that limits production, sets prices and restricts imports.

Additionally, the Trump administration, under pressure from the U.S. Export Dairy Council, then headed by current Agriculture Secretary Tom Vilsack, included provisions in the United States‐​Mexico‐​Canada Agreement to restrict exports of formula from Canada.

The USMCA’s agriculture annex limits Canadian exports of infant formula anywhere in the world, not just to the U.S., largely to minimize sales to China after China’s largest formula maker, Feihe International, invested $175 million to build a baby formula plant in Ontario.

Canada is considered a safe, clean source of infant formula by Chinese parents after a 2008 scandal in which tainted, domestically produced baby formula resulted in the deaths of six infants and led to deep distrust of locally made formula.

Trump officials reasoned that if China was purchasing more infant formula from Canada, then it wasn’t buying from U.S. companies.

Under the USMCA rules, Canada is required to apply an export charge of CA$4.25 per kilogram to global exports of infant formula in excess of 13,333 metric tons for the remainder of the dairy year. The quota increased to 40,000 metric tons in year two of the trade agreement and by only 1.2% annually after that.

The charges are designed to offset the amount of subsidies that producers get on the input side, said Miller, a former policy adviser for the Business Council of Canada and the Canadian Embassy in Washington.

The export limits were actually below the production capacity of the Feihe plant, which does business as Canada Royal Milk, according to the Canadian Broadcasting Corp.

The U.S. imported no baby formula from Canada in 2021 because of the confusing USMCA regulations and expensive tariff-quotas, writes Gabriella Beaumont‐​Smith, a trade policy analyst at the Cato Institute, a libertarian think tank in Washington.

U.S. government and IBISWorld figures show Mexico is the largest overseas source of infant formula in the U.S., but formula accounts for a tiny fraction of the total imports from Mexico. Other primary exporters of formula are Ireland, Chile and the Netherlands.

The FDA has rigorous regimes for marketing certifications and ensuring that specialty products are properly labeled and authorized for sale in the U.S. market. Obtaining certifications for foreign dairy facilities is extremely intensive as well.

“Businesses also have little incentive to go through the onerous regulatory process to sell to American retailers, given the aforementioned tariffs and the relatively short duration of the current crisis,” said Beaumont-Smith.

It is illegal, for example, to import baby formula from the European Union for commercial purposes because it doesn’t comply with FDA labeling requirements, although parents can import it for personal use. Last summer, Able Groupe recalled German-made infant formulas distributed in the U.S. via mail service because the labels didn’t include notification that iron levels were below U.S. standards (1 milligram of iron per 100 calories) and weren’t in English.

Beaumont-Smith said many medical experts believe the differences between American and European formulas are minor and that the regulatory burden for meeting U.S. standards doesn’t noticeably increase safety.

U.S. Customs and Border Protection took credit in April 2021 for seizing 588 cases of infant formula in Philadelphia because they lacked appropriate nutritional labeling. The formula from major brands HiPP and Holle was imported by a freight forwarding company in 17 separate shipments from Germany and the Netherlands, where the companies are based.

The Food, Drug & Cosmetic Act (FDCA) prohibits interstate and import shipments of foods that have been misbranded. The FDA’s import safety alert said the cases of formula didn’t list the ingredients associated with formula for infants under the age of 1. The manufacturers also failed to comply with FDA regulatory requirements to sell their infant formula in the United States, CBP said in a news release.

Miller said formula makers such as Nestle typically use the same recipes in other markets but would have to go through an “excruciating” process to get them certified and labeled for sale in the U.S.

“The great absurdity of this is that less than a hundred miles from the U.S. border you have this plant in Canada that is exporting to China. It’s all about the perversions of trade policy and who’s market is being protected,” said Miller, who is also a fellow at the Woodrow Wilson International Center.

Since February the FDA has taken a series of steps to increase domestic formula supply, including expediting certificates to allow already permitted products from abroad more flexibility moving into the U.S. and streamlining the import entry review process for certain products coming from foreign facilities with favorable inspection records.

The FDA says loosening import rules, in conjunction with the Department of Agriculture and U.K. and European authorities, has enabled a 300% increase in imports of infant formula year-to-date from last year. Much of the increase is likely connected to an ongoing airlift of infant formula from Abbott Labs’ facility in Ireland.

Companies interested in taking advantage of the latest flexibilities should submit information for the FDA to quickly evaluate whether the product can be used safely and whether it provides adequate nutrition. The FDA said it will look for proper labeling, information on nutritional adequacy and safety testing, and information about facility inspection history. The agency intends to prioritize submissions that can demonstrate the safety and nutritional adequacy of their products, and have the largest volume available and/or can get shipments on U.S. store shelves the quickest.

The FDA is already in discussions with some manufacturers and suppliers regarding additional supply.

“Today’s action paves the way for companies who don’t normally distribute their infant formula products in the U.S. to do so efficiently and safely. We are hopeful this call to the global market will be answered and that international businesses will rise to the occasion to assist in bolstering the supply of products that serve as the sole source of nutrition for many infants,” said FDA Commissioner Robert Califf. “With these flexibilities in place, we anticipate that those products that can quickly meet safety and nutrition standards could hit U.S. stores in a matter of weeks.”

In a commentary for The Hill newspaper, Willy Shih, professor of management practice at the Harvard Business School, blamed the shortage on a lack of spare capacity, low inventory strategies, market concentration in four main producers and elongated supply chains all aimed at meeting consumer expectations for low prices instead of building resilience.

Meanwhile, Abbott on Monday agreed with the FDA to take corrective action necessary to resume production at the facility and maintain quality controls. The Department of Justice filed a complaint alleging that Abbott managers failed to comply with quality and safety practices for producing infant formula, including protecting against the risk of contamination from bacteria. To resolve the complaint, Abbott agreed to enter into a consent decree requiring it retain an independent expert to help bring the Sturgis facility into compliance with the FDCA and safe food manufacturing standards. The consultants must periodically evaluate Abbott’s regulatory compliance.

The proposed safety plan, which is subject to court approval, includes requirements  for testing products, as well as ceasing production, and promptly notifying the FDA should contamination be detected. The proposed consent decree also requires Abbott to implement a sanitation plan, environmental monitoring plan and employee training programs.

Once the FDA confirms all conditions have been met, Abbott said it could restart the site within two weeks. The company would begin production of EleCare, Alimentum and metabolic formulas first and then begin production of Similac and other formulas. After the reopening, it will take six to eight weeks before products are available on shelves.