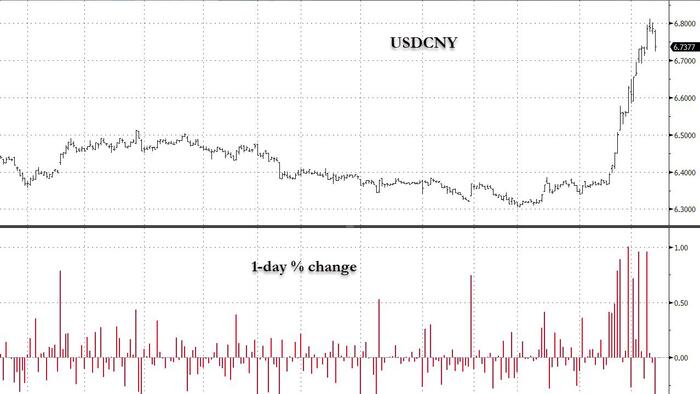 … a view we repeated a week ago when we warned all those who were short oil – on the “thesis” that China’s lockdowns would last indefinitely – to cover.

Fast forward to today when after more than a month of growing lockdown (and mangled supply chain) fears, there was finally a glimmer of hope at the end of China’s covid tunnel and possibly for Chinese markets.

As Bloomberg notes, Chinese lockdown conditions have improved over May 1-11, versus the April average, with the Goldman Effective Lockdown Index declining to 33.1 points for data so far in May, versus an average of 37.3 over April 1-25. The index is on a declining trend, and bits and pieces of news are mildly encouraging.

Most recently, Shanghai reported no new Covid-19 infections in the broader community for a third consecutive day, a long-awaited milestone which authorities have said will allow them to start unwinding the lockdown (even though most residents will have to put up with confinement for a while longer before resuming more normal life).

The commercial hub of 25 million set out on Monday its clearest timetable yet for exiting a lockdown now in its seventh week, but the plan was met with scepticism by many residents who have seen isolation extended time and again. “Normality is very far away,” said one Shanghai resident still stuck at home.

Still, Shanghai plans to resume outdoor activities in stages, with some shops reopening this week, but with most restrictions on movement remaining in place until May 21, after which public transport and other services will resume gradually.

By June, the lockdown should be lifted, but residents will still be asked to get tested frequently. More people were allowed out of their homes this week, with some joggers and dog walkers spotted. One man was seen fishing in a Shanghai creek. But tall fences remained around many residential compounds and there were almost no private cars on the streets, with most people still confined to their homes.

For other cities in China that have been under lockdown, three days with no new cases in the community usually means “zero COVID” status and the beginning of the lifting of restrictions. This suggests that activity will improve in May, albeit at a depressed level.  The correlation in levels terms between the official PMIs and the lockdown index since 2021 have been -67% and -95% for manufacturing and non-manufacturing respectively. In changes terms, correlations are -47% and -93%.

Beijing’s latest daily case count was 52, with authorities discovering a few dozen new infections on an almost daily basis despite gradually tightening restrictions over the past three weeks or so. Dine-in services are banned in the capital, some malls and other businesses are shut, public transport is curtailed and many residents have been advised to work from home. Residents in some COVID-affected parts of Beijing’s Fengtai district were ordered not to leave their neighbourhoods, state television reported on Tuesday. In Beijing’s largest district, Chaoyang, some compounds have closed side exits while main gates are manned by volunteers checking health credentials on the mobile app authorities use to track COVID.

Security personnel patrolled the banks of the Liangma canal, which has become a picnic spot in recent weeks for residents not allowed to go elsewhere. Signs had been put up asking people to “avoid crowds, gatherings and eating together”.

China’s uncompromising “zero-COVID” policy has placed hundreds of millions of consumers and workers under various restrictions at a time when the rest of the world is lifting them to “live with the virus” even as infections spread. Data this week showed the havoc wreaked on the economy by Shanghai’s lockdown and the curbs in dozens of other major cities, with retail sales and industrial output plunging at their fastest pace in more than two years in April.

The capital Beijing saw a 16% plunge in retail sales in April, the beginning of its current outbreak, according to Reuters calculations based on January-April data released on Tuesday. Property sales dropped 26%.  The American Chamber of Commerce warned that COVID controls would hamper foreign investment in China for years to come as travel curbs disrupt due diligence on projects. Big firms are also exploring alternatives for supply chains, it said.

News that China “finally” appeared to be getting over its second covid crisis sent the onshore yuan sharply higher, with the USDCNY falling as much as 0.7% to 6.7377, its biggest decline since October.

It followed the 9th consecutive stronger-than-expected yuan fixing by the PBOC, at 6.7854 per dollar, stronger than the 6.7872 average estimate in a Bloomberg survey where forecasts ranged from 6.7830 to 6.7911.

Market sentiment was also boosted by optimism that a meeting Tuesday between the Chinese regulators and tech giants would result in Beijing dialing back its yearlong clampdown of the industry.

“The easing restrictions is a driver for yuan gains, but just as important is the general USD retreat,” says Alvin Tan, head of Asia currency strategy at RBC Capital Markets

In light of the bullish reversal in sentiment, it is not surprising why Bloomberg’s Simon Flint echoed what we have been saying for much of the past few weeks: “to the extent that markets should be focused on the second derivative of activity, there is some hope that the worst is over.”