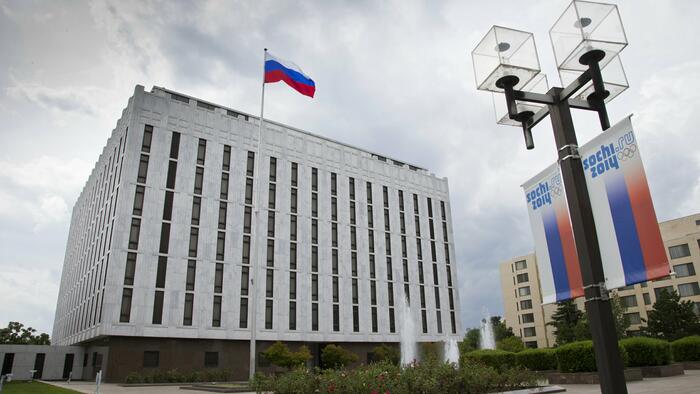 
Russian Ambassador to the US Anatoly Antonov over the weekend went public with an usual allegation – that Russian diplomats working in Washington are being harassed and increasingly approached by the FBI and CIA, which are said to be seeking information. Without specifying which precise entity is allegedly behind it, Antonov went so far as to say this includes “threats of physical violence” against Russian embassy employees in D.C. amid the ongoing war in Ukraine.

Antonov described to Russia’s TASS news agency over the weekend: “It’s like a besieged fortress. Basically, our embassy is operating in a hostile environment … Embassy employees are receiving threats, including threats of physical violence.”

“Agents from US security services are hanging around outside the Russian embassy, handing out CIA and FBI phone numbers, which can be called to establish contact,” he claimed.

The Russian ambassador’s words were picked up by Reuters, which contacted the named agencies in order to seek confirmation or comment. “CIA and the FBI declined comment. The Office of the Director of National Intelligence and the U.S. State Department did not immediately return messages seeking comment,” the report noted.

While it’s long been acknowledged as somewhat standard practice among competing foreign intelligence agencies to attempt to quietly recruit agents and assets from the other side (who often work under diplomatic cover at their respective country’s embassy or consulate), what is entirely uncommon is that this type of activity would be done so brazenly just outside embassy grounds, as the Russian ambassador is alleging.

As for the general atmosphere of harassment and intimidating “threats” that Russian embassy employees might be on the receiving end of – this part of the allegations seems more believable given Russian officials in Europe have already been subject of such attacks.

The Russian ambassador to Poland was attacked as he tried to lay a wreath at the Soviet soldiers’ cemetery in Warsaw. pic.twitter.com/FFtBzuRITW

The foremost latest example was Russia’s ambassador to Poland getting doused in red paint on the occasion of a May 9th ‘Victory Day’ ceremony. Embassies and consulates in various parts of Europe have also been subject of vandalism and property defacement of late.