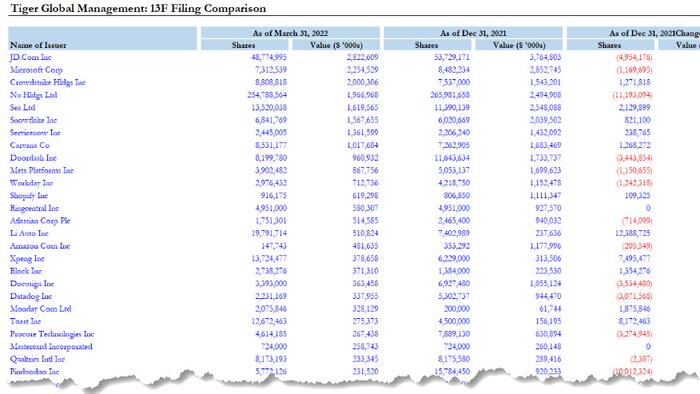 
Heading into today’s 13F filing deadline for the first quarter, we said that it would be the first time that investors actually cared about (and read through) at least some of these filings in years…

… and none more so than the 13F belonging to the biggest tech-focused fund of them all, Tiger Global, which having accumulated tens of billions in the past two decades, has gotten destroyed in the past few months, losing $17 billion in 2022, and which according to the FT, “has in four months erased about two-thirds of its gains since its launch in 2001, according to calculations by LCH Investments.”

To be sure, we don’t know what the fund has done in the past 45 days since the 13F covers the period from the start of the year through March 31, but even that is plenty, and below we summarizes the most important changes to what is arguably the most important portfolio for the tech world.

First, according to its just filed 13F, Tiger Global Management managed just $26.6 billion as of March (in disclosed longs), nearly $20 billion less than the $46 billion it reported as of Dec 31.

Digging through some of its most notable changes, we find that Tiger liquidated all of its holdings in Netflix and Adobe during the first quarter, which combined were worth more than $1 billion as of Dec 31, while buying more shares of Carvana. NFLX plunged 38% in the first three months of the year.

The fund also bought shares of beleaguered online used-car retailer Carvana, which plunged 49% during the quarter and has lost an additional two-thirds of its value since March 31. Tiger also added to its holdings in Crowdstrike, Sea Ltd, Snowflake, Servicenow, and others. While not captured by this 13F period, Tiger Global’s losses mounted in April, with the hedge fund declining 15%, extending this year’s drop to 44%.

As we reported previously, the firm is headed for its worst year since it was founded in 2001 as fast-growing tech companies in the US and China – which were behind the fund’s earlier gains – cratered. The tech-heavy Nasdaq 100 slid 13% in April, its biggest monthly decline since 2008, while the broader S&P 500 fell 8.8%, the most in more than half a century.

The full breakdown of changes between Dec 31 and March 31 is shown below (new positions in green), starting with the fund’s top 5 positions: JD.com (it reduced this position by 942K shares), Microsoft (cut by 598K shares), Crowdstrike, NU Holdings, and Sea Ltd. Tiger also slashed its holdings of Facebook Meta by a whopping 25%, and ended the quarter owning just $867.8 million.

In total, Tiger Global sold out of 83 shares and bought just two new positions: digital banking-services firm Dave (a banking app aimed at people who hate banks. Dave offers products like no-interest cash advance) and Starry Group Holdings Inc. It was left with 88 stocks they’re invested in as of March 31. And the market value of those holdings is $26.6 billion.

… Looking at the liquidations, Tiger Global sold out of Netflix, Adobe, Coupa, Sunrun, Paypal and more. They ditched 83 stocks entirely in the first quarter.