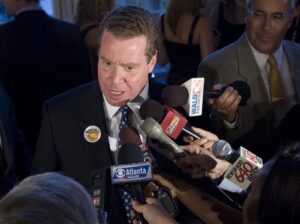 
A long-running investigation into a former Georgia insurance commissioner has finally come to an end.

The Atlanta Journal-Constitution reported that former Commissioner John Oxendine agreed to turn over about $128,000 in campaign contributions from his 2009 bid for governor, and the state Ethics Commission agreed to drop the prosecution.

Oxendine, who was commissioner in the 1990s and 2000s, had been accused of illegally using campaign donations for payment on a home, and for fancy cars and child care expenses. Following a report by the Atlanta newspaper in 2009, a complaint was filed against his gubernatorial campaign, alleging he had accepted $120,000 or more than 10 times the legal limit, in bundled contributions from two Georgia insurance companies.

An ethics complaint against the insurers was dismissed in 2014 after the ethics commission made little progress on it, in part because of turnover at the agency and what the news site called “endless drama” at the agency.

The commission did not dismiss charges against Oxendine but the case remained largely dormant until another AJC investigation reported in 2015 that Oxendine never returned more than $500,000 worth of leftover contributions from his gubernatorial bid. He allegedly kept money raised for the general election campaign, which he never ran in after he lost the 2010 primary vote.

The ethics staff filed an amended complaint in 2015. After several years of court battles, the commission decided to move ahead with further allegations in 2019, but an administrative law judge threw out the complaint last fall.

In turning over the $128,000, Oxendine admitted no wrongdoing. He now works as an attorney in private practice.