Is the rally in cooling? In a sense, the answer may lie in the weather, which, on the contrary, is finally turning balmy in parts of the US where it matters.

Officially, the so-called shoulder season between winter and late spring has been around for weeks, But instead of spawning the moderate conditions that require neither heating nor cooling indoors, the Eastern US gas market was filled with more chill than expected over the past five weeks, resulting in higher-than-expected gas burns to the keep region warm.

The turn in the weather means the storage numbers for gas issued by the US Energy Information Administration each Thursday could start coming in on the higher end as utilities start injecting more of their production into underground salt caverns, after presumably burning less than before for power generation.

The net effect of this will be a relief to some of the upside pressure in Henry Hub pricing for the fuel.

“Injections through May are projected to keep level with the five-year average in the following two weeks, until lighter weather at the end of May allows for heavier injections that will eventually outpace the five-year injection average for those respective weeks,” analysts at Houston-based gas market consultancy Gelber & Associates said in a note to their clients on Wednesday.

“As a result, even as natural gas prices soar higher, the gargantuan 306 billion cubic feet (bcf) deficit between storage and the five-year average of total inventories is projected to lessen, potentially limiting the magnitude of any coming price escalation.”

But a look at the Henry Hub’s daily vagaries will suggest a market that’s still red-hot for pricing.

The hub’s front month for June resumed its upward trajectory on Thursday, rising nearly 35 cents to $7.72. That was after Monday’s plunge of more than $1 that shook the foundations of the rally from Friday which brought gas to within a hair of $9 pricing—the first time it has done so since August 2008.

Until last week, bets were accumulating that this rally wouldn’t stop until it reached $10. Many bulls are still expecting 2008 highs of more than $13 by this summer when temperatures spike, forcing Americans to turn their air-conditioners on to max. Any untoward demand for liquefied natural gas (LNG) from Europe at that time could exacerbate the rally.

For now, though, the market’s volatility is likely to be a bigger feature, as two straight months of 28% gains in March and April come under pressure from shifting weather patterns and a slight improvement in storage levels.

Technical charts also indicate the potential for a bearish turn.

“Weakness below $7.29 can push gas down to $7.03 and retest the $6.43 swing lower,” said Sunil Kumar Dixit, chief technical strategist at skcharting.com. 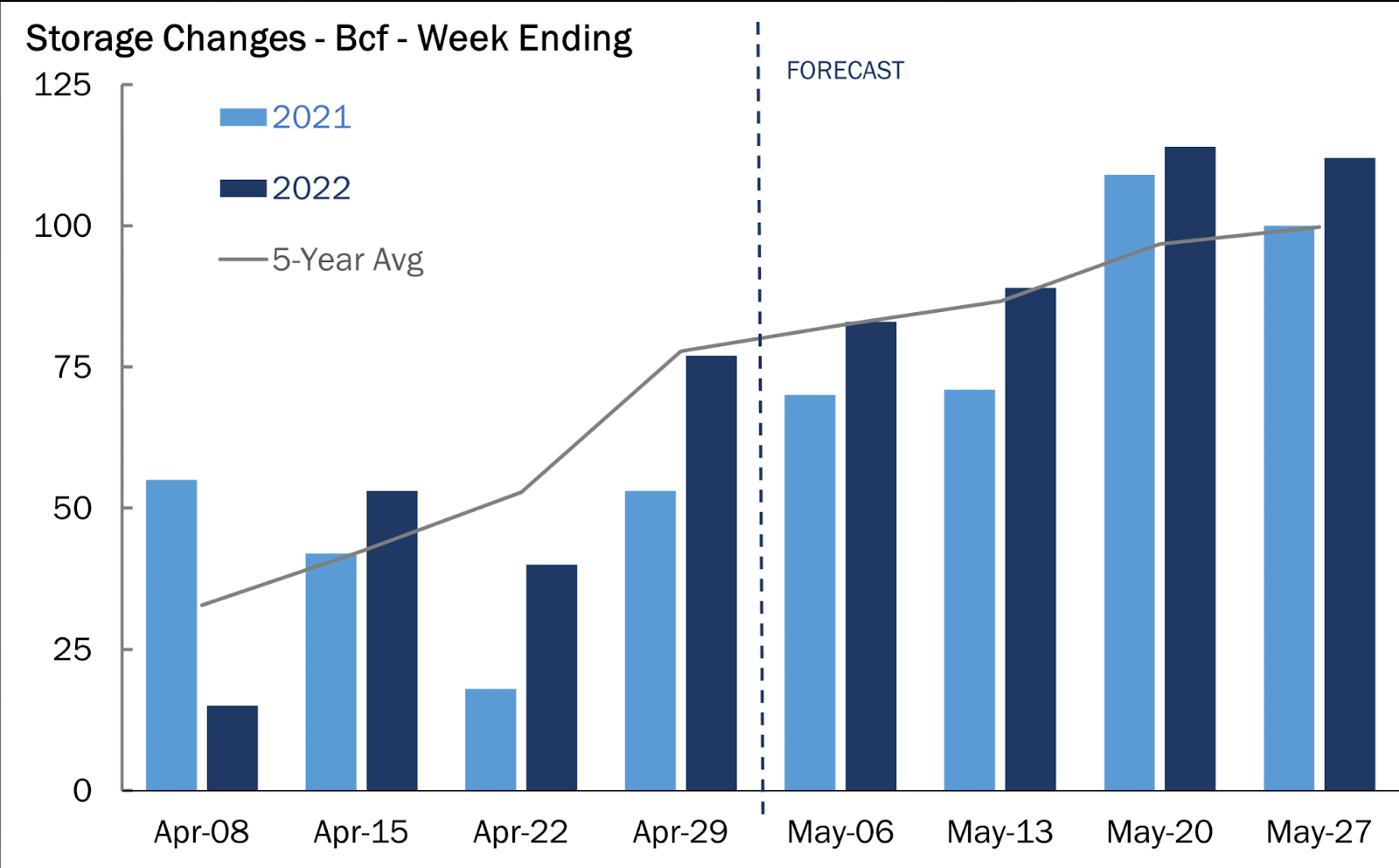 For the week ended May 6, analysts tracked by Investing.com think that rose by 79 bcf versus the build of 70 bcf during the same week a year ago and the five-year (2017-2021) average injection of 82 bcf.

In the prior week to Apr. 29, utilities added 77 bcf to storage.

If correct, analysts’ consensus forecast for last week’s storage build would boost stockpiles to 1.646 trillion cubic feet (tcf), about 15.8% below the five-year average and 18.5% below the same week a year ago.

Reuters-associated data provider Refinitiv said there were 71 total degree days (TDDs) last week, compared with a 30-year normal of 67 TDDs for the period.

TDDs, used to estimate demand to heat or cool homes and businesses, measure the number of degrees a day’s average temperature is below or above 65 degrees Fahrenheit (18 degrees Celsius).

Rises in domestic production were offset by a decrease in Canadian imports, leaving the supply balance relatively unchanged in comparison to last week.

Mexican exports of LNG, meanwhile, declined by around 0.1 bcf per day while LNG export averages remained stagnant week over week.

Changes in power generation sources were the largest driver behind last week’s higher demand for gas. Those in the know said lower national wind generation, which averaged around 51,000 megawatts an hour, forced independent supply operators to rely more on gas—bringing storage estimates down by more than 10 bcf.

Bespoke Weather Services said forecasts for the next two weeks—and beyond—call for seasonally strong heat and robust cooling demand over large parts of the Southern United States. Cooling degree days (CDD) are expected to accumulate as the month wears on, providing price support.

“We have now reached the point where CDDs become the key driver in demand,” Bespoke said in comments carried by naturalgasintel.com. Adding:

“Southern heat is still the focus heading into this weekend and early next week, with the risk of 100-degree highs in places like Dallas and San Antonio very impressive for the middle of May.”

Wind also is expected to prove modest in Texas this weekend, Bespoke added, “which could make power burns quite strong. While the southern heat weakens after that, we suspect the bias will remain to the above side of normal heading into the end of May and into June.”

Meanwhile, despite interruptions caused by spring maintenance work, US LNG exports volumes are holding above 12 bcf/d in May as Europe’s scaling back of Russian gas prompts US supplies to help fill the void.