Market volatility roiled Wall Street to start off the new trading week, posing a threat to the incoming Asia-Pacific session. All three major benchmark stock indices closed in the red, with futures tracking the Dow Jones, S&P 500 and Nasdaq 100 sinking -1.98%, -3.2% and -3.95% respectively. If all 3 of them end this Friday lower, this will be some of the worst consecutive weekly declines since 2002.

There were few escape paths in the market. In the table below, the 3 worst-performing sectors within the S&P 500 were energy (-8.3%), real estate (-4.62%) and consumer discretionary (-4.26%). Specific economic events that may have driven the sharp dive were notably absent. Some newswires were citing a higher-than-previous survey of inflation expectations released by the New York Federal Reserve.

Likely, traders are continuing to face a difficult fundamental environment for risk assets. The Fed is just about to begin unwinding its almost USD 9 trillion balance sheet and inflation continues to run around 40-year highs. Meanwhile, China’s economy is slowing amid a strict zero-Covid lockdown strategy that risks exacerbating global supply chains. Traders are also bracing for this week’s latest US inflation report.

On the daily chart, Dow Jones futures have plunged into the critical 32521 – 31951 support zone. This marks the lowest close since March 2021 and is just shy of a 13% contraction from the December record high. A confirmatory daily close lower could open the door to extending losses towards lows from March 2021. A turn higher places the focus on a near-term falling trendline from late April. 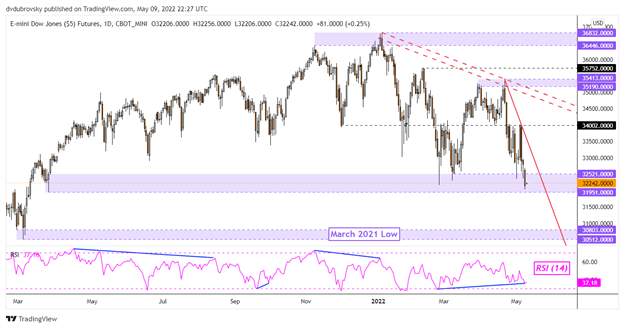 The ASX 200 has been on an aggressive decline since late April, with the latest close bringing prices down to lows from March. The index also took out a rising trendline from late January, opening the door to extending losses. Clearing immediate support, the 100% Fibonacci extension at 7007, exposes the 6747 – 6894 zone below. 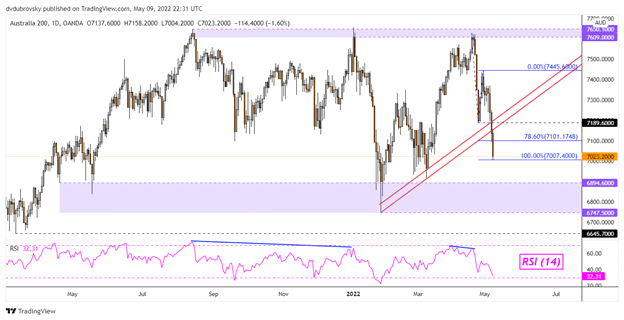 The Hang Seng Index is now back to the April low, which held as support at 19625 over the past 24 hours. A daily close under this price opens the door to revisiting the March low, which is also closely aligned with the 2016 bottom. In the event of a turn higher instead, keep a close eye on the falling trendline from February. It could reinstate the downside focus. 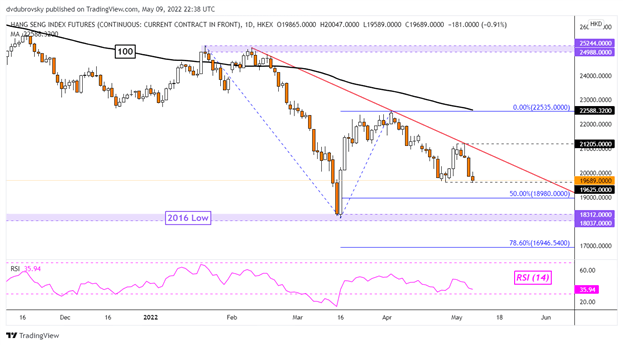