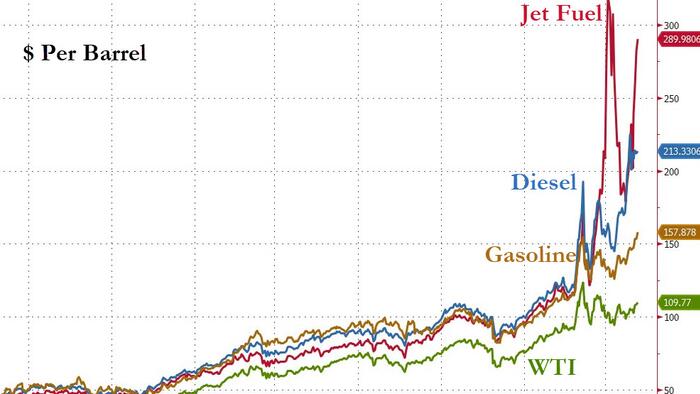 If you are the owner of an oil refinery, then crude is trading happily just a little above $110 a barrel – expensive, but not extortionate. If you aren’t an oil baron, I have bad news: it’s as if oil is trading somewhere between $150 and $275 a barrel.

The oil market is projecting a false sense of stability when it comes to energy inflation. Instead, the real economy is suffering a much stronger price shock than it appears, because fuel prices are rising much faster than crude, and that matters for monetary policy.

Refined oil products have risen between 30% and nearly 140% since Russia invaded Ukraine in late February, compared to less than 15% for crude.

To understand why, let’s examine the guts of the oil market: the refining industry.

Wall Street closely monitors the price of crude, particularly a grade called West Texas Intermediate traded in New York. It’s a benchmark followed by everyone, from bond investors to central bankers. But only oil refiners buy crude — and therefore, are exposed to its price. The rest of us — the real economy — purchase refined petroleum products like gasoline, diesel and jet-fuel that we can use to run cars, trucks and airplanes. It’s those post-refinery prices that matter to us.

Typically, the price of crude and the price of refined products go up and down in tandem, almost symmetrically. What’s in between is a refining margin. In normal times, WTI is a handy price shorthand for the entirety of the petroleum market. So when, say, U.S. Federal Reserve Chairman Jerome Powell looks at WTI, he gets a neat picture of the whole energy market.

But we aren’t in normal times. Right now, the traditional relationship between crude and refined products is broken. WTI is anchored around $100-$110 a barrel, suggesting that — in barrel terms — gasoline, diesel and jet-fuel prices shouldn’t be much higher, once you add the average refining margin.

In reality, they are a lot more expensive. Take jet-fuel: in New York harbor, a key hub, it’s changing hands at the equivalent to $275 per barrel. Diesel isn’t far away, at about $175 a barrel. And gasoline is at about $155 a barrel. Those are wholesale prices, before you add taxes and marketing margins.

What’s changed? Refining margins have exploded. And that means energy inflation is far stronger than it appears.

Oil refineries are complex machines, capable of processing multiple streams of crude into dozens of different petroleum products. For simplicity’s sake, the industry measures refining margins using a rough calculation called the “3-2-1 crack spread”: for every three barrels of WTI crude oil the refinery processes, it makes two barrels of gasoline and one barrel of distillate fuel like diesel and jet-fuel.

Oil refiners are enjoying the best ever processing margins, lifting the cost of fuels such as gasoline, diesel and jet-fuel well above that of crude

From 1985 to 2021, the crack spread averaged about $10.50 a barrel. Even between 2004 and 2008, during the so-called golden age of refining, the crack spread never surpassed $30. It rarely spent more than a few weeks above $20. Last week, however, the margin jumped to a record high of nearly $55. Crack margins for diesel and other petroleum products surged much higher.

There are four main reasons behind the explosion in refining margins.

In some markets, like the U.S. East Coast, diesel stocks have fallen to a 30-year low. Despite rising prices and fears of an economic slowdown later this year, oil executive say they see strong consumption for now.

Second, the U.S. and its allies have tapped their strategic petroleum reserves to cap the rally in oil prices.

That has provided extra crude, which has put a lid on WTI prices, but it hasn’t addressed the tightness in refined products.

Only a small fraction of the emergency release is in the form of refined products, and only in Europe.

Third, and perhaps most importantly, refining capacity has declined where it matters for the market now, and the plants that are operating are struggling to process enough crude to satisfy the demand for fuel.

Martijn Rats, an oil analyst at Morgan Stanley, estimates that outside China and the Middle East, oil distillation capacity fell by 1.9 million barrels a day from the end of 2019 to today — that’s the largest decline in 30 years.

The downward trend started well before the pandemic hit, as old Western refineries struggled to compete, environmental regulations increased costs and the unfounded fear of peak oil demand amid the energy transition prompted some companies to close plants. The fuel-demand collapse triggered by Covid-19 only turbo-charged the trend, resulting in dozens of refinery operations shutting down for good in Europe and the U.S. in 2020 and 2021. New capacity has emerged in China. However, Beijing tightly controls how much fuel its refiners can export so that capacity is effectively out of reach of the global market.

“Has the oil market hit the refinery wall?,” Rats asked in a note to clients last week. “Unusually, the answer appears to be yes.”

Fourth, are the sanctions and unilateral embargos — also known as self-sanctions — on Russian oil.

Before the invasion of Ukraine, Russia was a major exporter not just of crude, but also of diesel and semi-processed oil that Western refiners turned into fuel. Europe, in particular, relied on Russian refineries for a significant chunk of its diesel imports. The flow has now dried.

Europe not only needs to find extra crude to produce the diesel and other fuels it’s not buying from Russia, but, crucially, it needs the refining capacity to do so, too. It’s a double blow. Oil traders estimate that Russia has shut down 1.3 million to 1.5 million barrels a day of refining capacity as result of the self-sanctions.

Who’s benefiting? The pure-play oil refiners, which are quietly enjoying record-high profit margins. While OPEC and Big Oil get the blame, independent refiners are cashing-in. The sky-high crack margins explains why the share prices of U.S. refining giants Marathon Petroleum Corp. and Valero Energy Corp. have surged to all-time highs.

The longer the refiners make super-profits, the harder the energy shock will hit the economy. The only solution is to lower demand. For that, however, a recession will be necessary.