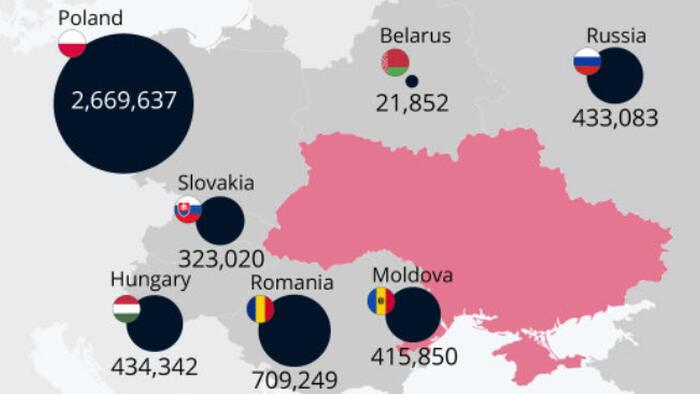 
As of April 13, 12 PM CET, around 4.6 million people living in Ukraine have left the country to seek shelter from Russian aggression, either permanently or temporarily. As Statista’s Florian Zandt details in the chart below, based on data from the United Nations High Commissioner for Refugees (UNHCR), most of the people fleeing have crossed over at the Polish border.

Roughly 2.6 million refugees have reached Ukraine’s western neighbor via foot, bus, car or train looking for safety from the Russia-Ukraine war according to government records. Apart from Poland, Romania and Moldova have carried the brunt of the refugee wave among Ukraine’s neighboring countries over the last weeks. With Ukrainian males between 18 and 60 not being allowed to leave the country for some time now and efforts to establish humanitarian corridors in besieged cities proving less than fruitful, the refugee numbers have declined over the last weeks. This doesn’t detract from the situation in Ukraine though, with President Biden accusing Russia of genocide due to the alleged mass killing of civilians in formerly Russian-occupied towns.

After failed attempts to seize control of important seats of power like Kyiv, experts expect Putin to turn his attention towards the regions of Luhansk and Donezk in Eastern Ukraine in an attempt to increase the territory occupied by the breakaway states of the same name, which have not been recognized as independent by 192 members of the United Nations.