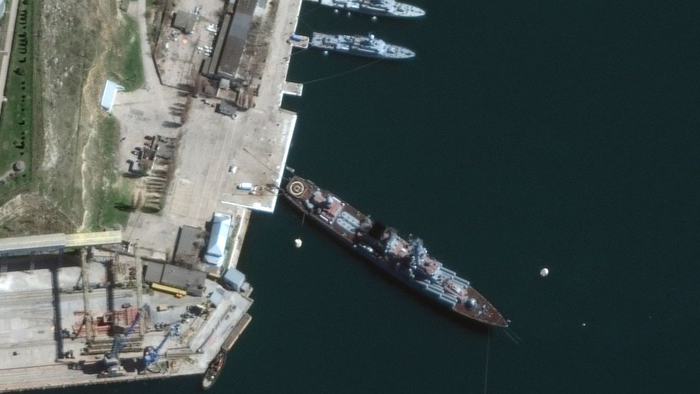 
In the overnight hours the question as to the precise fate of the Russian warship Moskva off the Odessa coast remained unclear. Into Thursday morning, there were still conflicting narratives after Ukraine’s military said it scored two direct hits on the vessel with Neptune anti-ship missiles, while the Kremlin admitted “serious damage” but said it was due to munitions being set off by a fire on board.

The wildly contrasting narratives opened up more as Russia issued a firm denial that the ship was hit, even as Ukraine’s southern military command said the Moskva started sinking. Western journalists have in some instances reported that Russian sailors, numbering over 500, have evacuated the stricken warship.

In a Thursday morning interview Pentagon spokesman John Kirby weighed in, telling CNN that the Moskva is still afloat but was badly damage. He did not offer confirmation of the Ukrainian version of events, but only said “there was an explosion”.

Kirby said, “We’re not quite exactly sure what happened here. We do assess that there was an explosion — at least one explosion on this cruiser — a fairly major one at that, that has caused extensive damage to the ship,” according to CNN.

“We assess that the ship is able to make its own way, and it is doing that; it’s heading more towards now we think the east. We think it’s probably going to be putting in at Sevastopol for repairs, but we don’t know what exactly caused that,” Kirby added.

Reuters has since reported the Russian defense ministry statement saying it’s being towed back to port, which does confirm severe damage:

Russia said the crew of its Black Sea fleet flagship were evacuated on Thursday and measures were being taken to tow the stricken ship back to port, after an explosion of ammunition on board that Ukraine said was caused by a missile strike.

Kirby had further described in the CNN interview that “The explosion was sizable enough that we picked up indications that other naval vessels around her tried to come to her assistance, and so eventually that wasn’t apparently needed. So she is making her own way across the Black Sea and we’ll continue to try and monitor this as best we can.”

At the same time national security advisor Jake Sullivan told an audience at an event in D.C. that “We’ve been in touch with the Ukrainians overnight who said they struck the ship with anti-ship missiles.” He admitted there’s little to go on in terms of which narrative of events is accurate: “We don’t have the capacity at this point to independently verify that, but certainly the way that this unfolded is a big blow to Russia.”

“This is their flagship, the ‘Moscow,’ and they’ve now been forced to admit that it’s been badly damaged,” Sullivan pointed out. “And they’ve had to kind of choose between two stories. One story is that it was just incompetence, and the other is that they came under attack. And neither is a particularly good outcome for them.”