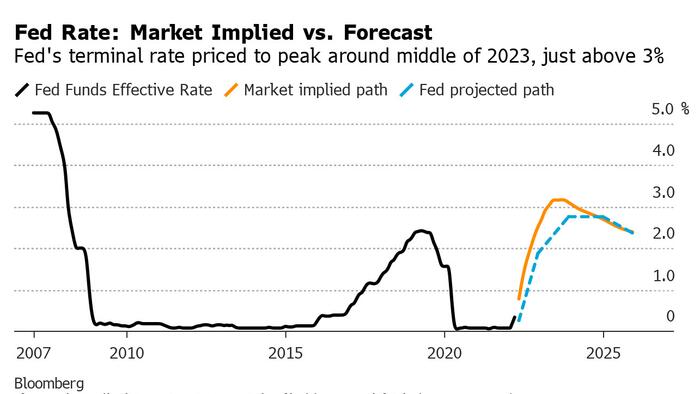 
Not a day seems to pass any more without some Fed speaker “surprising” markets with some uber-hawkish comment out of left field, and after Brainard on Tuesday, the FOMC Minutes (which laid out the details of the Fed’s $1 trillion a year balance sheet runoff) on Wednesday, this morning its was the turn of St Louis Fed President James Bullard – who as a reminder was the sole dissented in the latest FOMC meeting, demanding a 50bps hike instead of 25bps – who was of course hawkish, and said monetary policy benchmarks using “generous assumptions” suggest that the Fed may need to raise interest rates to about 3.5% to counter inflation that’s running far too high. In other words another 300-325 bps of hikes.

Bullard cited a version of the Taylor Rule  to come up with his estimate for how high rates should go.

“One concludes that the current policy rate is too low by about 300 basis points, according to this calculation,” Bullard said Thursday in prepared remarks at the University of Missouri. That could suggest, by that measure, the Fed is “behind the curve,” he said, pointing out what has been patently obvious for a long, long time to anyone… but the Fed.

The Fed raised its benchmark overnight rate by 25 basis points last month to a target range of 0.25% to 0.5%. Meanwhile inflation is at 8% and about to hit double digits. The last time inflation was here, the Fed’s overnight rate was over 12%.

It is unclear if the Fed will be able to hike to 3.5% before the economic implodes, but Bullard will certainly get his wish for one or more 50bps rate hikes on the way there. Yesterday’s FOMC minutes revealed that “many” officials had been of the same mind and only opted for the smaller increase out of caution in light of Russia’s invasion of Ukraine. The minutes also showed that many of them also noted that one or more half-point hikes could be appropriate going forward to counter the hottest inflation in four decades.

Markets have already incorporated Fed tightening into their pricing, with the 2-year Treasury yield trading at around 2.45%, or 1 percentage point below what might be needed, Bullard said. It has also led to a yield curve inversion suggesting the next recession is coming.

“This suggests the Fed is not as far ‘behind the curve,’ although it would  still have to raise the policy rate to ratify the forward guidance,”  Bullard said, whistling past the graveyard and ignoring the elephant in the room, namely that as shown in the chart below, the Fed will hike to just over 3% before the next recession hits in late 2023 and the Fed has to start cutting again.

Bullard said he expects growth of “a slower but still robust 2.8% pace in 2022,” despite a weak first quarter and impact from the Russian invasion of Ukraine. He said the unemployment rate may fall below 3% this year.

“The expansion is not ‘old’ and can continue for a long time,” he said, clearly disagreeing with Morgan Stanley which is warning that we have just a few more month left in the end-cycle before the next recession

And while the market knows better than to listen to Bullard – or anyone else from the Fed – it had no choice, and the latest round of hawkish commentary pushed S&P futures near session lows and back to red for the day.