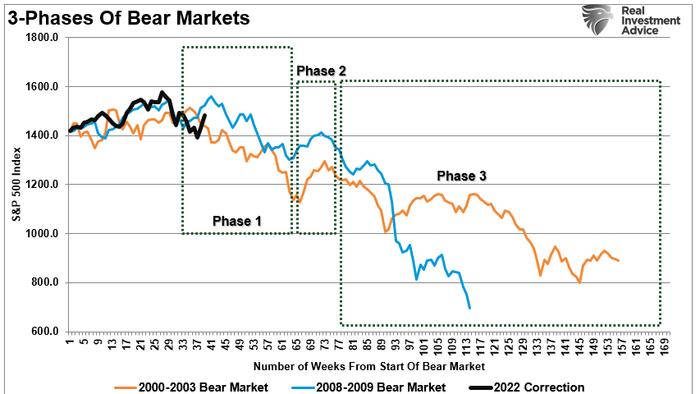 “Anatomy of a Bear Market” by Russell Napier is a “must-read” manuscript. Given current market dynamics, a review seems timely. As my colleague, Richard Rosso, CFP, previously penned:

“A mandatory study for every financial professional and investor who seeks to understand not only how damaging bear markets can be but also the traits which mark their bottoms.

Every bear awakes from hibernation for different reasons. However, when studying the four great bottoms of bears in 1921, 1932, 1949, and 1982, there are several common traits to these horrendous cycles.”

Not surprisingly, after 12-years of Fed interventions, seemingly impenetrable markets, and low yields, investors have become overly complacent. Such is despite repeated warnings to the contrary,

Such is why bear markets are always vicious, brutal, devastating, and fast. It is the exogenous event, usually credit-related, which sucks the liquidity out of the market causing prices to plunge.

As prices fall, investors panic-sell driving prices lower. Such forces more selling in the market until, ultimately, it exhausts the sellers.

It is the same every time.

While investors insist the markets are currently NOT in a bubble, it would be wise to remember the same belief existed in 1999 and 2007.

Throughout history, financial bubbles are only recognized in hindsight when their existence becomes ‘apparently obvious’ to everyone.

Of course, by that point it was far too late to be of any use to investors and the subsequent destruction of invested capital.

This time will not be different. Only the catalyst, magnitude, and duration will be.” – “No More Recessions,”May 2019

However, therein lies the lessons from of the “Bear Market Anatomy” and Russell Napier.

“Low volume represents a complete disinterest in stocks. Keep in mind this contradicts the tenet, which states that bears end with one act of massive capitulation – a  downward cascade on great volume. Those actions tend to mark the beginning of a bear cycle, not the end.

A rise in volume on rebounds, falling volumes on weakness would better mark a bottoming process in a bear market.”

Using that analysis, we can see volume did pick up during the recent decline. However, volume is far below the 2020 “bear market bottom,” suggesting investors remain complacent.

“There will appear to be a recovery, an ‘all-clear’ for stock prices. It will suck investors back into the market, only to financially ravage them once again.

Anecdotally, I know this cycle isn’t over as I still receive calls from people who are anxious to get into the market and perceive the current market a buying opportunity. At the bottom of a bear, I should hear great despair and a disdain for stock investing.”

Bears Can Be Tenacious

“They refuse to die or, at the least, quickly return to hibernation. The 1921 move from overvaluation to undervaluation took over ten years. Bear markets, where three-year price declines make overvalued equities cheap, are the exception, not the rule.

As of this writing,  the Shiller P/E is at 35x – hardly a bargain.  At the bottom market cycle of the Great Recession, the Shiller CAPE was at 15x. There is still valuation adjustment ahead.”

Bears Can Depart Before Earnings Recover

“Investors who wait for a complete recovery in corporate earnings will arrive late to the stock-investment party.

Most likely, it will take a while (especially with the debt burden), for the majority of U.S. companies to reflect healthy earnings growth. CEOs who employ stock buybacks to boost EPS will be considered pariahs and gain unwanted attention from Congress and even the Executive Branch.

A savvy investor should look to minimize indexing, and select individual stocks with strong balance sheets, low debt, and plenty of free cash flow. A focus on sectors and industries that are nimble to adjust to the global economy post-crisis will be an added benefit.”

Bear Market Damage Can Be Inconceivable

“The bear market of 1929-32 was characterized by an 89% decline. The average is 38% for bear markets;  however, averages are misleading. I have no idea how much damage this bear ultimately unleashes. The closest comparison I have is the 1929-1932 cycle.

However, with the massive fiscal and monetary stimulus (and I don’t believe we’ve seen the full extent of it yet),  my best guess is a bear market contraction somewhere between the Great Depression and Great Recession. At the least, I believe we re-test lows, and this bear is a 40-45% retracement from the highs.”

Also Read: A 50% Decline Will Only Be A Correction

Bear Markets End On The Return Of General Price Stability

Low valuations (not there yet), when combined with a return to normalcy in the general price level, may provide the best opportunity for future above-average equity returns. We are not there.”

With prices for commodities still spiking due to economic disruption, the bear market anatomy suggests that until those prices return to normal, the risk is not over.

Bear Markets That Don’t Decline On Bad News Is Positive

“The combination of short positions in conjunction with a market that fails to decline on lousy news was overall a positive indicator of a rebound in 1921, 1932 and 1949. Also, limited stock purchases by retail investors may be considered an essential building block for a bottom.

The worst economic data is still forthcoming, which suggests expectations for the continued market, and economic recovery may be misplaced.”

Not All Bear Markets Lead The Economy By 6-9 Months.

“Generally, markets lead the economy. However, this tenet failed to hold true for the four great bears. At extreme times, the bottoms for the economy and the equity market were aligned and in several cases, the economy LED stocks higher!

It’s unclear whether this bear behaves similarly only because of massive fiscal and monetary stimulus. We’re not done with stimulus methods either. If anything, they’ve just begun! I know. Tough to fathom.”

Also Read: The 4-Phases Of A Full Market Cycle

Throughout history, individuals repeatedly jump into the more speculative stages of the financial market under the assumption that “this time is different.”

However, the massive surge in monetary and fiscal stimulus took market speculation to an entirely new level since the pandemic-driven lows.

There are a select group of investors who are revered for their knowledge and success. While we idolize these investors for their respective “genius,” we can also save ourselves time and money by learning from their wisdom and their experiences.

That wisdom was NOT inherited but birthed out of years of mistakes, miscalculations, and trial-and-error. Most importantly, what separates these individuals from all others was their ability to learn from those mistakes, adapt, and capitalize on that knowledge in the future.

Experience is an expensive commodity to acquire, which is why it is always cheaper to learn from the mistakes of others.

We have compiled a collection of those rules, axioms, and pearls of wisdom here: Part 1and Part 2.

We hope you find something useful in them to you navigate whatever comes next.