There’s no two-ways about it: gold prices outperformed our expectations in Q1’22. Our rationale for not taking a bullish outlook on gold was, and still is, well-grounded: central banks, including the Federal Reserve, have begun to winddown pandemic-era stimulus efforts, with rate hike cycles just getting started.

At least in the short-term, a potent catalyst arrived that trumped interest expectations: Russia’s invasion of Ukraine. With global financial markets upended and commodity supply chains in disarray, inflation expectations skyrocketed again. Instead of rising real yields, we saw falling real yields from mid-February through the end of March.

Alas, with the prospect of a Russia-Ukraine ceasefire gathering steam towards the end of Q1’22, it’s possible that sanctions against Russia are lifted, thereby removing pressure on global commodity supply chains. In turn, inflation expectations could backoff, and consistent with the longer-term narrative of central banks raising interest rates, real yields could start to rise again.

Therein lies the challenge for gold prices in Q2’22: unless there is a dramatic escalation in the conflict between Russia and Ukraine that ensnares the European Union and the United States into a protracted dispute, the catalyst that drove gold prices higher in recent months is likely to be short-lived.

Despite the disruption created by the Russian invasion of Ukraine, the same obstacles remain for gold prices henceforth. With central banks acting to tamp down persistently higher realized inflation in the short-term, longer-term inflation expectations should begin to ease back, pushing down real yields and thus preventing gold prices from holding onto recent gains.

Gold, like other precious metals, does not have a dividend, yield, or coupon, thus rising US real yields remain problematic. In other words, when other assets are offering better risk-adjusted returns, or more importantly, offering tangible cash flows during a time when inflation pressures are raging, then assets that don’t yield significant returns often fall out of favor. Gold behaves, in effect, like a long duration asset (as measured by modified duration, not Macaulay duration); a zero-coupon bond.

The facts on the ground haven’t changed and will become a greater influence should the Russia invasion of Ukraine stop. Monetary easing enacted by central banks and fiscal stimulus provided by governments are now firmly in the rearview mirror. A ceasefire between Russia and Ukraine will relieve pressure in food and energy prices, which in turn will help reduce inflation expectations. But because of how high inflation readings are in economies like the EU, the US, and the UK, central banks will still raise interest rates aggressively over the course of 2022. 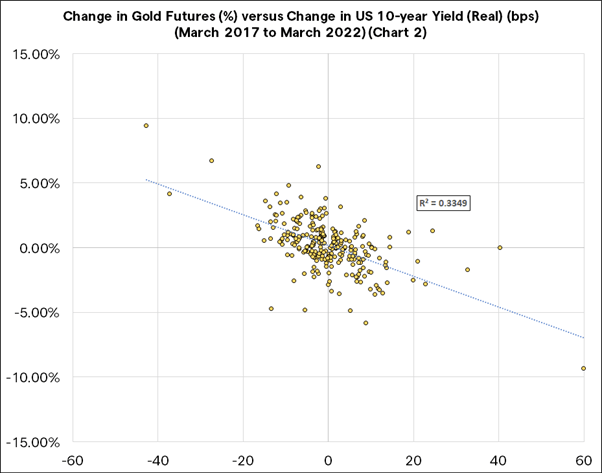 Barring World War 3, it’s difficult to envision how the environment becomes any more appealing for gold prices from a fundamental perspective. Yes, there is chatter about how the EU and US sanctions against Russia threaten US Dollar hegemony, which ultimately may provoke more countries to abandon USD-denominated reserves and instead allocate more reserves to gold. But that’s a longer-term story, one that won’t play out over the next quarter, or even year, particularly as over 40% of global trade continues to be denominated in USD (and another 35% in EUR).