An unnatural calm is seeping into the trade and it all has to do with the weather. That may sound trite, since natural gas is all about the weather anyway.

In this case though, the seasonal temperature shift from the super-cold of January-February to the thaw of March has introduced a relative calm in the pricing of gas futures on the Henry Hub, with the front-month trading in a tight band of a little over 30 cents this week.

April gas hit a five-week high of $5.184 on Mar. 7, as the global oil benchmark and a host of other commodities soared to multi-year peaks on the Russia-Ukraine conflict.

Never a market swayed too long by geopolitics, natural gas quickly descended from there to the mid $4 levels, moving about 1-2% a day since, compared to its double-digit swings of early February.

It’s a trading band not witnessed since the first week of December, when the market was still in the throes of advanced Fall and before the official onset of Winter weather.

The current phenomenon has the familiarity of a full-bloom beckoning of Spring, which begins this Sunday. It’s a time of year when the market usually goes into transitory mode for something else: shoulder-season.

“This is representative of the downward trend observed in overall HDDs as temperatures moderate and heavy weather demand decreases,” Houston-based energy consultancy Gelber & Associates said in an email on Wednesday to its clients with exposure to natural gas.

HDDs refer to Heating Degree Days, which is used to estimate demand to heat homes and businesses. It measures the number of degrees a day’s average temperature is below 65 degrees Fahrenheit (18 degrees Celsius).

“The height of winter has long passed and for now, the market is beginning to transition into the shoulder season.”

Shoulder-seasons occur during spring and fall, marking the transition between cold and hot, and hot and cold weather, respectively. Essentially, little gas is burnt during these periods for either heating or cooling, explaining the resultant drop in market activity and volatility.

The lull that the trade will experience soon also means that on natural gas reported by the US Energy Information Administration each Thursday could show higher inventories. 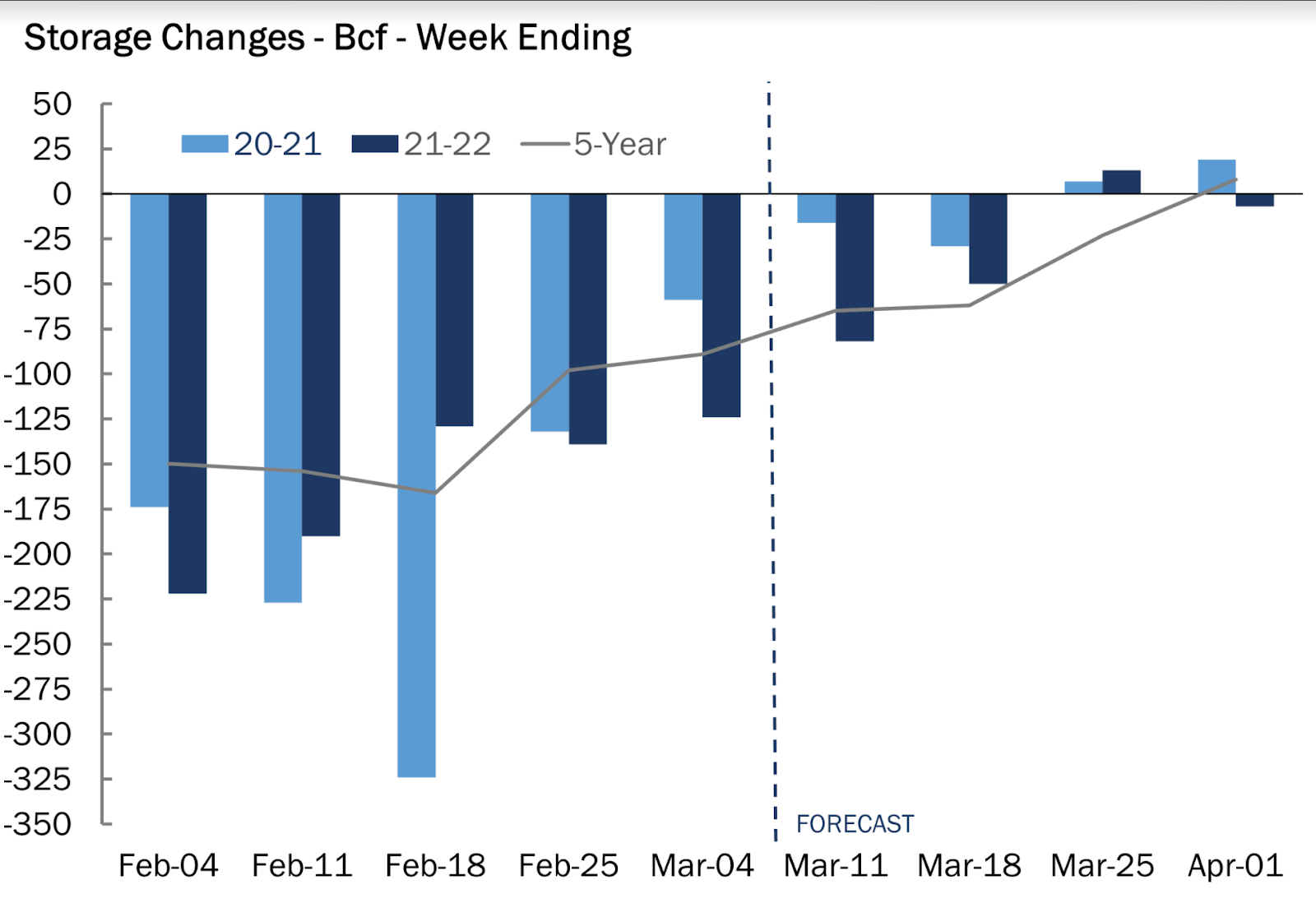 For today, the consensus among  analysts tracked by Investing.com is that the agency will report a drawdown of 138 billion cubic feet (bcf). That compared with a withdrawal of 132 bcf during the same week a year ago and a five-year (2017-2021) average withdrawal of 98 bcf. In the prior week to Feb. 18, utilities withdrew 129 bcf of gas from storage.

If analysts’ consensus forecast is on target, the withdrawal during the week ended Feb. 25 would cut inventories to 1.644 trillion cubic feet (tcf), about 13.4% lower than the five-year average and 11.6% below the same week a year ago.

“Moderately cool weather is the fundamental driver behind the above-average withdrawal,” Gelber & Associates said in its email.

“Looking ahead into the future, storage withdrawals are expected to diminish in size, and initial forecasts indicate the potential for the first injection of the season to appear as early as the week of March 25th.”

Forecaster NatGasWeather concurred with that outlook, saying weather models continued to show pleasant conditions—and modest heating demand—for the second half of March. However, forecasts advertised somewhat chillier air developing near the end of the month, it added.

The pattern over the next 12 days remained “exceptionally warm and bearish” in the latest model runs, with conditions expected to result in “much lighter than normal national demand,” NatGasWeather said in a report carried by naturalgasintel.com.