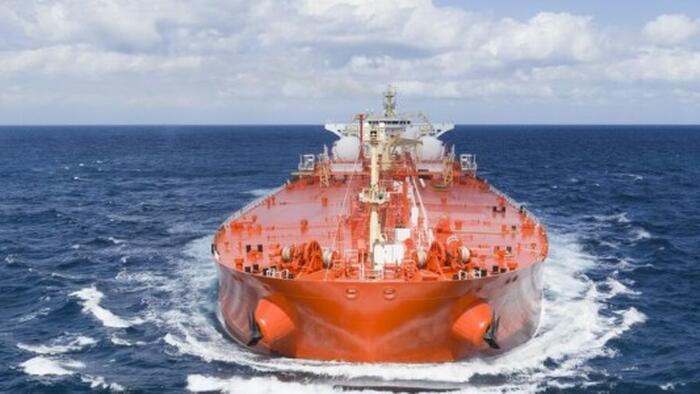 
As OilPrice reports, amid a general unwillingness of tanker owners to send their vessels to Russian ports, the freight rates for a medium-sized tanker to load Russian crude jumped nearly threefold on Thursday from Wednesday, shipbrokers and traders told Bloomberg.

The freight rate to hire an Aframax tanker on the Baltic Sea to Europe route surged after Russia invaded Ukraine, while owners of oil tankers had already started to avoid Russian ports because of both the military invasion of Ukraine and apprehension that sanctions for oil could also come soon.

Rates to charter Suezmax ships climbed $55,800 to $67,027/day, the highest since April 2020 when every oil merchant was scrambling to store oil offshore.

As a result of the surging Baltic-Europe tanker rates, the Middle East to Europe rates also rose, and on Friday hit the highest on record.

As we reported on Thursday, while international benchmark oil prices were soaring on Thursday, the Urals grade was offered at the deepest discount in at least 11 years—$11.60 a barrel below Dated Brent, as traders feared sanctions on Russian oil. Even Chinese buyers of Russian seabourne oil had put their purchases on hold amid US concerns over Russian sanctions.

Owners of tankers have become reluctant to offer their vessels to load crude from Russia for fear that their future cargo could be breaching potential sanctions if the West decides to deploy the harshest sanctions against Russia after it invaded Ukraine early on Thursday.

Shipowners are also concerned about rising bunker fuel prices and have asked for higher freight rates, while owners of mid-sized Aframax tankers who have ships plying the Mediterranean are worried about war risk premiums, Reuters reported citing a shipbroker.

“Activities (in the East) are quiet for now. But we will know gradually how the freight market picks up further,” another shipbroker, based in Singapore, said, also speaking on condition of anonymity.

As a result of the sudden shortage of Russian oil in the supply chain, even fuel tanker rates from the United States to Europe jumped more than 8% on Thursday, surging to their highest level since May 2020. The cost of bunkering fuel at the world’s largest bunkering hub Singapore jumped 6% on Thursday to $555 per tonne, the highest since 2019.

Rates for Very Large Crude Carriers (VLCCs) from the Middle East to China, Asia’s benchmark for crude freight, rose 4.77 Worldscale (W) to 38.82W on Friday, a shipbroker said, referring to points on the pricing index operated by the Worldscale Association that is used as an industry tool to calculate freight charges. Each VLCC can carry 2 million barrels of oil.

All these sharply higher transit prices will eventually manifest themselves in soaring gasoline prices at the pump.

But it’s not just consumers that are impacted: broad economic slowdown is coming next: buyers in Asia, the key crude importing region, were alarmed that they could soon struggle to procure enough crude. The general perception among Asian oil traders is that the situation is “quite complicated,” one trader told Energy Intelligence on Thursday.

The latest round of sanctions against Russia—latest as of late Thursday—continues to allow energy trade and bank settlements for energy flows and does not cut off Russia from the SWIFT global banking system.