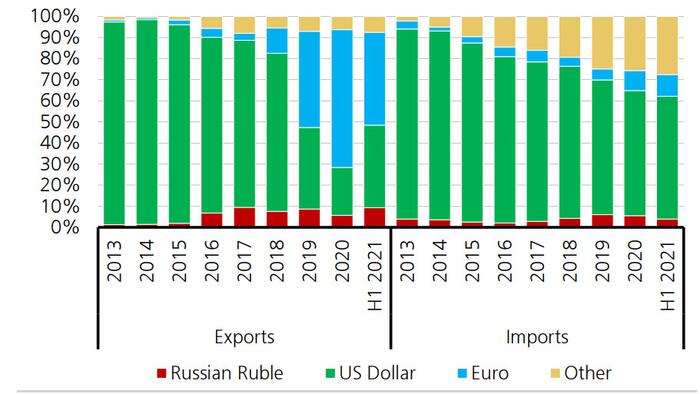 The U.S. expanded sanctions against Russia on Wednesday after President Vladimir Putin moved to recognize breakaway territories in Ukraine as independent states. The standoff may further Moscow’s de-dollarization movement and see the Chinese yuan play a more-important role in Russia’s trade and finance.

The initial global implications from the escalation of the Ukraine-Russia tensions was to add to the inflation trouble that many parts of the world are already struggling with. Inflation expectationsembedded in the U.S. two-year breakeven rate surged to a record, while the probability of a 50bp move at the Fed meeting next month inched up. Bloomberg’s commodities index hit the highest since 2014, the year when Russia annexed Crimea. The Crimea crisis didn’t have a persistent impact on global markets, but Russia’s strongerfinancial position, including larger foreign reserves and higher energy prices, means it can sustain more sanction pain.

A byproduct of the sanctions is that they are likely to force Russia to further reduce the role of the dollar in its economy, a move that started when the West imposed restrictions following the Crimea annexation eight years ago. The dollar’s share of Russia’s foreign-currency reserves, currently at $640 billion, has declined to 16% in 2021 from 46% in 2017. In comparison, the yuan’s share rose to 13%, from less than 3%, while the euro’s gained to 32% from 22%.

The U.S. currency’s dominance in Russia’s trade payments has also diminished. Its share in Russia’s export receipts has declined from 69% in 2016 to 56% in the first half of 2021, while the euro’s doubled to 28%, according to a study by UBS’s economist Anna Zadornova.

The de-dollarization trend is more clear in Russia’s trade with China, its second largest trading partner after the EU. The dollar’s share in Russia’s export to China has declined from nearly 100% in 2013 to about 40% currently, according to UBS. Its import share also dropped from 90% to 60%.

The current geopolitical crisis puts Beijing in a delicate situation as it seeks to support Russia against the U.S. while also portraying itself as a responsible global power. And as Natixis’s economists Alicia Garcia Herrero and Jianwei Xu noted, a closer trade relationship with China isn’t likely to fully offset the impact of increasing decoupling from EU. Still, Russia may be testing grounds for Beijing’s push to internationalize the yuan.