What the United States and Europe have warned of since November is finally here: a full-scale Russian invasion of Ukraine.

And what could follow is another prediction that’s been on the table for months: Curtailment of Russian gas exports to Europe as Moscow retaliates against the West’s sanctions.

In the immediate hours of President Vladimir Putin’s announcement of a special military action aimed at the “demilitarization” and “denazification” of Ukraine, on New York’s Henry Hub were up 6%, hovering at 4.85 per thermal unit.

, led by global benchmark , also rose about 6%, reaching peaks above $100 per barrel the first time since 2014, in a lockstep move by energy markets to price in the risk of Russian disruptions to supply. So, how high could Henry Hub gas go by the end of the week?

It’s a question that is expected to dominate Thursday’s conservation in gas, pushing aside the weekly US update provided by the Energy Information Administration, and will likely influence the market’s narrative over the coming weeks.

“Strong momentum above $4.92 can launch natural gas prices to $5.05 and $5.40,” said Sunil Kumar Dixit, a technical forecaster at skcharting.com.

That would be slightly below the November peak of $5.88 when the Russian-Ukraine threat began.

But if Europe begins competing for every available cargo of US liquefied natural gas (LNG) to make up for supply deficits, then Henry Hub would be at least between $7 and $8 conservatively, said some analysts.

Central to the argument over gas prices are the sanctions that have already been announced by Washington and its Western allies against Russia—and new measures that were being formulated even as this article was being written.

On Wednesday, he added to those measures by announcing sanctions on the company in charge of building the Nord Stream 2 gas pipeline—a pet project of Putin.

Biden’s decision on the pipeline may seem academic given that Germany had already suspended the Nord Stream 2 gas a day earlier.

But Berlin has withheld a decision on the more important Nord Stream 1 and Yamal gas pipelines that Russia still has running into Europe. This is the network that Europe will likely want to preserve to literally keep the lights—and heat—on across the bloc. Roughly a third of the gas burned in Europe comes via this source.

This is the network that Russia would likely cut off as ‘payback’ for the sanctions it has been hit with over Ukraine. Putin has denied any intent to do so. But he also denied for three months any intent to attack Ukraine.

As Alan Beattie observed in an opinion piece in the Financial Times on Tuesday:

“But it has a proven ability to absorb a considerable amount of economic damage even when, perhaps particularly when, directed at households,” Beattie said. “Certainly, there is public discontent in Russia over stagnant living standards. But it doesn’t seem to be at a level that directly threatens Putin’s power or prevents further military adventures.”

“This is a risk gas markets have struggled to price in since the Russia-Ukraine conflict intensified at the end of 2021,” Knutsson said in comments carried by the naturalgasintel.com portal.

Going forth, Europe would likely have to rely on imports from the US LNG market amid declining exports from Africa and Europe’s limited possibilities to raise its own gas production.

“Further out in 2022 and into 2023, we see a risk that European balances could experience a deficit, leaving the region reliant on LNG, which would impact global flows,” Knutsson said.

“It means Europe will have to compete with global buyers for additional LNG cargoes, which will drive up prices significantly.”

All things being equal, LNG exports growth is set to continue this year and next, reaching a projected 11.5 bcf/d on the average for 2022 and 12.1 bcf/d in 2023, according to projections by the US Energy Information Administration.

Pricing wise, LNG went from record lows under $2 per unit in 2020 to record highs of $56 in October 2021. Benchmark prices currently stand at about $25 per unit. 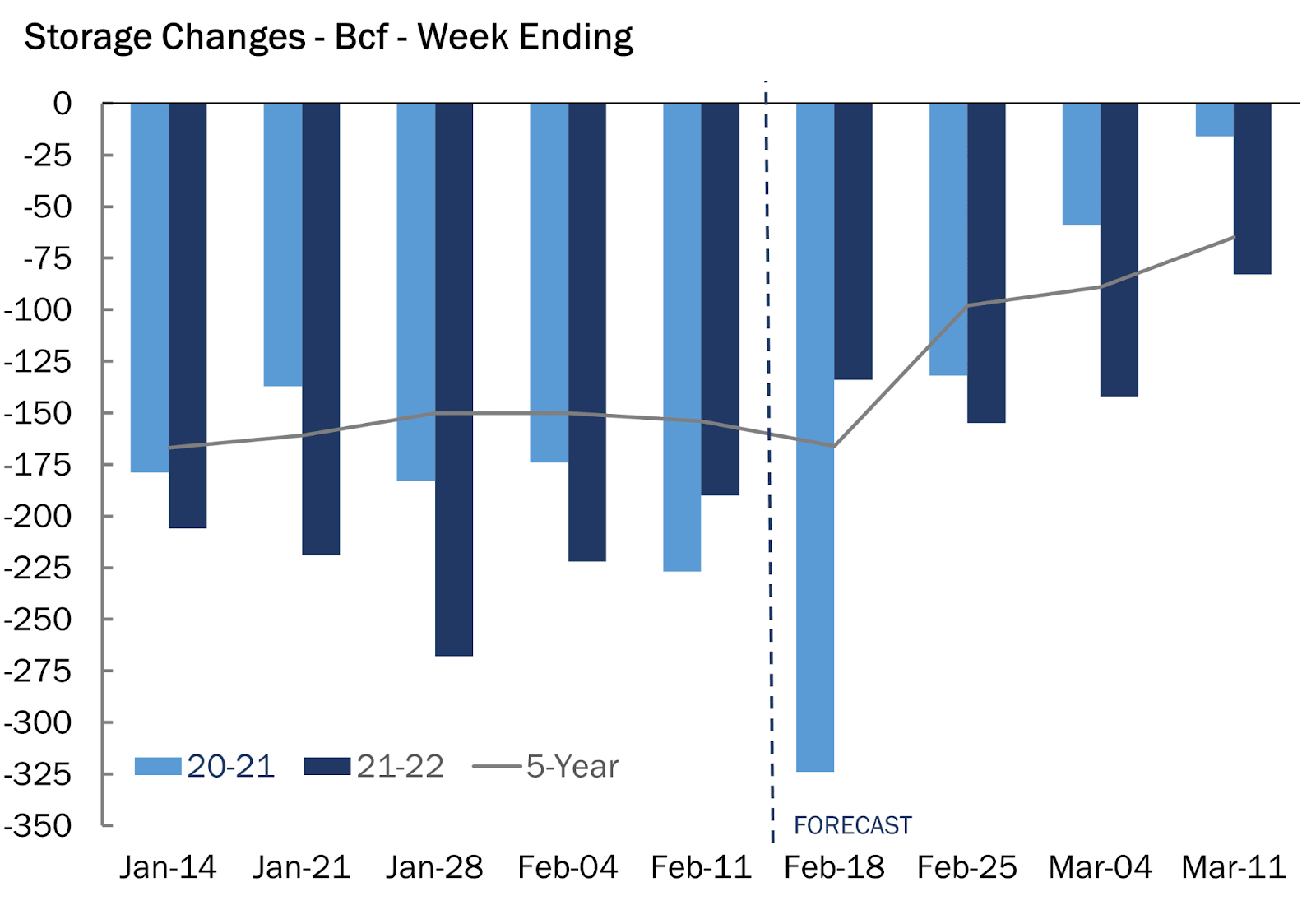 For the weekly storage update due on Thursday, analysts tracked by Investing.com expect a drawdown of 134 bcf, versus the previous week’s decline of 190 bcf. It would be the seventh week in a row where weekly gas burns by utilities had exceeded 100 bcf, with four of those weeks turning in drawdowns in excess of 200 bcf.

More importantly, if the latest week’s draw turns out to be around the forecast level of 134 bcf, it would be some 30 bcf below the five-year average for storage at this time of year.

“It will be the first of the year where the realized withdrawal value falls under that of the five-year average,” said Dan Myers, analyst at Houston-based gas market consultancy Gelber & Associates. “This in of itself is a testament to the strength of the sustained cold period observed through January and early February.”