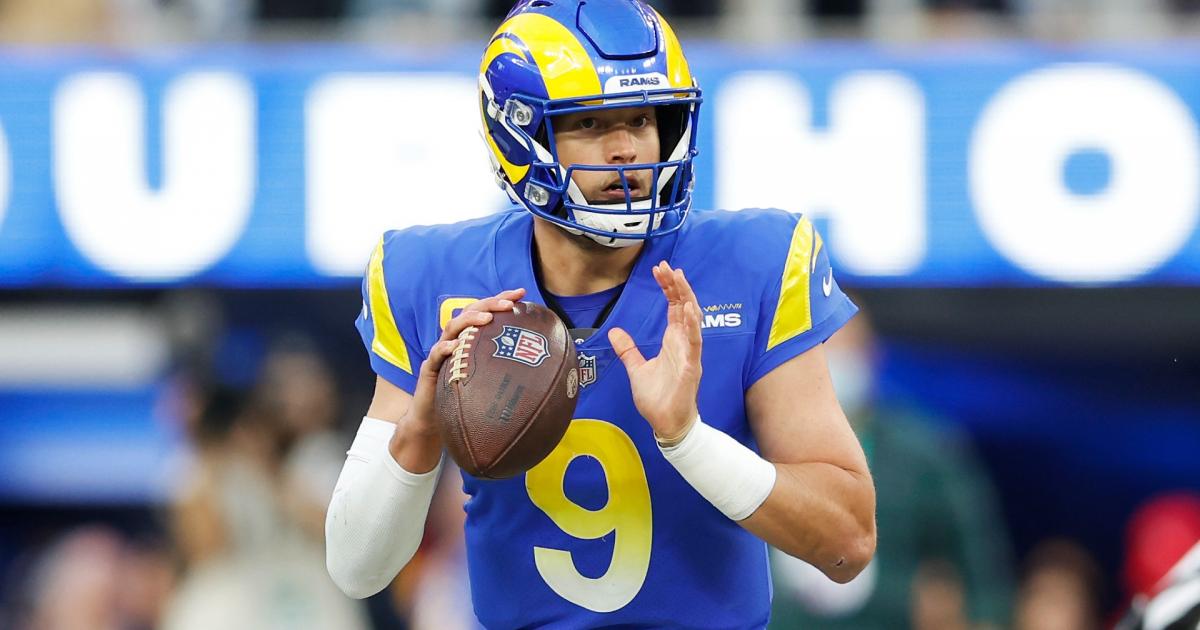 Matthew Stafford went from 12 mostly losing seasons with lowly Lions to leading the Rams to Super Bowl 56 in his first season in Los Angeles. Does that raise the quarterback’s profile into one worthy of the Pro Football Hall of Fame?

Given how Super Bowl success has been a major historical factor in getting players into Canton, that’s not a silly question to bring up for a player. Some might say winning a ring stamps and changes the perspective career. Others would say it reflects only a small part of a career.

Here’s an examination of Stafford’s case to determine whether he will go from sporting Honolulu and royal blue to wearing the ultimate gold jacket:

The Hall of Fame case for Matthew Stafford

Beyond Stafford getting to the Super Bowl, he has some impressive accomplishments. Five yards short of 50,000 passing yards, he is No. 12 all-time, sandwiched between Hall of Famers John Elway and Fran Tarkenton.

In 2015, he became the first quarterback to complete 60-plus percent of his passes for every game in a season. In 2016, he had a record 8 successful fourth-quarter comebacks, part of 34 for his career.

In many seasons in Detroit, he did his best to lift the Lions gunslinging with his big arm, taking advantage of a good receiving corps stamped by Hall of Famer Calvin Johnson. That has continued in his connection with current Rams go-to guy Cooper Kupp. Stafford has been a well-liked and respected leader on both of his teams. Just as important, he has a good relationship with the local media. Nationally, he’s been perceived as a standout passer even on some of the worst teams.

Now, he’s playing in his first Super Bowl immediately after arriving in Los Angeles. Gaudy numbers are Stafford’s best support toward the Hall of Fame and now he has changed the big-game narrative. But there’s quite a bit working against him, too, independent of him getting a ring.

The Hall of Fame case against Matthew Stafford

Stafford doesn’t have the typical individual accolades associated with a Hall of Fame quarterback. He’s been to only one Pro Bowl in 13 seasons, 8 of which he had a below-.500 record,  He is under .500 for his career, at 86-95-1. His only major award is the 2011 NFL Comeback Player of the Year. He’s never been on any All-Pro teams.

Before his current run with the Rams, beating the Cardinals, Buccaneers and 49ers to get to the Super Bowl, Stafford had played in only three playoff games with the Lions and lost them all. When he starts in the regular season, he has a 11-71 record against teams with a winning record and 1-10 against 10-win teams.

Let’s then compare Stafford with a few similar modern-era quarterbacks who are not in the Hall of Fame. According to Pro Football Reference,  Stafford’s career is similar to those of Tony Romo, Mark Brunell and the late Steve McNair.

Romo started for the Cowboys for less than 10 full seasons. He went to four Pro Bowls and made second-team All-Pro once. He had a career passer rating of 97.1 and completion percentage of 65.1 at 7.9 yards per attempt. Romo had a 78-49 career record as a starter in the regular season. He was hurt by going 2-4 in the playoffs with Dallas.

Brunell, starting for the Jaguars and later Washington, went to three Pro Bowls. He had a career passer rating of 84.0 and a completion percentage of 59.3 at 6.9 yards per attempt. He also was a little above .500. He was 5-5 in 10 playoff games.

McNair, starting for the Oilers/Titans and later the Ravens, made three Pro Bowls. He was second-team All-Pro when he was named co-NFL MVP with Peyton Manning in 2003. He rated 82.8 with a completion percentage of 64.9 at 6.9 yards per attempt. He also rushed for 3,590 yards in his career. In the regular season, he went a mighty 91-62. He was 5-5 in 10 playoff appearances and led Tennessee to Super Bowl 34 against the Rams, when his team fell “one yard short” of sending the game into overtime.

Stafford, who falls short on the honors, has a 91.1 rating and completion percentage of 63.0 at only 7.3 yards per attempt, surprising giving his big-arm downfield reputation. Romo, Brunell and McNair haven’t gotten much Hall of Fame buzz since they retired. They would qualify for the Hall of Very Good. Should Stafford be pushed toward the Hall, there’s no doubt that voters should do due diligence and reexamine the better overall cases of Romo and McNair in particular.

If Stafford’s No. 9 gets into Canton, it would be ridiculous for Romo to be not there with them. Eli Manning will likely get in with a more questionable regular-season resume, but his durability, likability in a big market, two Super Bowl rings, his last name and extension of big brother Peyton are all outlier assets in his favor.

There’s more vs. Stafford. He also just tied for the league lead in interceptions (17) with rookie Trevor Lawrence this season. For his career, Stafford has thrown 161 interceptions, a high total in relation to his contemporaries. To make matters worse, Stafford has thrown 27 “pick sixes”. Although that ties him with Hall of Famers Drew Brees and Peyton Manning and puts him only behind Hall of Famers Joe Namath, Dan Marino and Brett Favre, he doesn’t have same proficient resume of those QBs, with the exception of Namath.

Namath, by the way, by the numbers, shouldn’t have been a Hall of Famer. But got a lot of worthy weight for coming through on his Jets winning guarantee in Super Bowl III in a very important game for the NFL. He also was helped a ton by his celebrity status playing in the biggest market and crossing over into pop-culture lore. In that sense, Stafford pales vs. Namath and another matinee idol in the Hall, Rams legend Bob Waterfield. There’s room for only one modern Namath, and his name is Eli Manning.

Is Matthew Stafford a Hall of Famer?

Stafford is an interesting case study because of recent career developments. There’s no doubt he’s an exceptional physical talent with great pedigree as the No. 1 overall pick in the 2009 NFL Draft. In relation to many Lions QBs not named Bobby Layne, Stafford stands out, but when putting him in the big picture of top quarterbacks, the narrative is different.

Stafford isn’t a Hall of Famer now, but that can change. At 33, he would need to string together several starring seasons with the Rams to put together any kind of legitimate case.