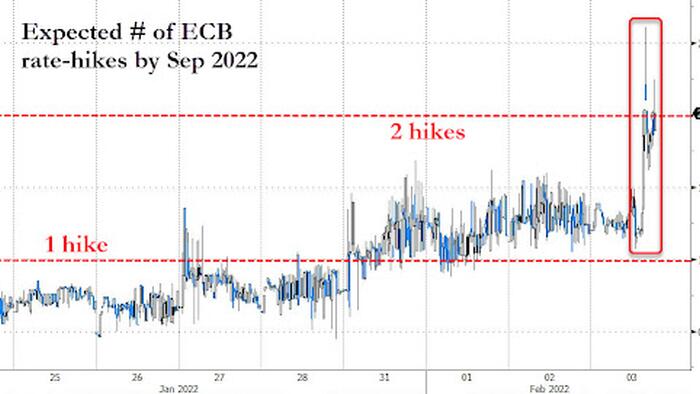 
With markets still in shock over Lagarde hawkish presser, and Italian bonds at yields that scream a new fiscal crisis is just around the corner, the trial balloons have started dropping with Bloomberg reporting moments ago that ECB policy makers “can imagine recalibrating their outlined policy path in March,” according to unnamed hawkish sources who could barely wait for the end of Lagarde conference before dialing Bloomberg.

According to the report, the Governing Council agreed at Thursday meeting that “it’s sensible not to exclude a rate hike this year” and that “an end of bond-buying under the APP in the third quarter is possible.” This means that the ECB is now open to a rate hike in Q4 – since Lagarde said bond buying will have to end first before rate hikes begin – which however still puts it well behind the curve as the market now prices about two rate hikes by September.

As a reminder, Lagarde refused to repeat at her press conference that a rate increase was “very unlikely” this year, highlighting more persistent-than-expected inflation pressures in the 19-nation bloc.

Meanwhile, in a note published moments ago, Deutsche Bank’s FX strategist George Saravelos has flipped on his bearish Euro view and writes that the ECB pivot has arrived and that it is now time to buy EURUSD. Here are the key highlights:

Throughout the last few months, our framework on EUR/USD has been critically dependent on the relative policy stance and gap between the Fed and ECB. Our bearish bias has been based on the assumption that the ECB would have not been willing to signal a shift in policy bias until later in the year. President Lagarde in today’s press conference has clearly signaled a pivot from slow-moving  calendar-based guidance to something far more active. This suspension of guidance is a  critical development for the FX market.

Effectively, it is validating the liberation of the European interest rate curve this year and turning the ECB in to a live central bank. We would note that the two largest moves in FX markets over the last twelve months have been driven by the hawkish FOMC pivots in both June and January.

We would see this as an equivalent pivot for Europe. The shift has been the signal we have been looking for a pivot our view on the euro. We therefore close out our FX Blueprint short recommendation at close to flat and now enter a long EUR/USD position. Our FX forecasts were premised on a euro decline in the first half of the year with a rise thereafter. We will reassess this profile in coming days