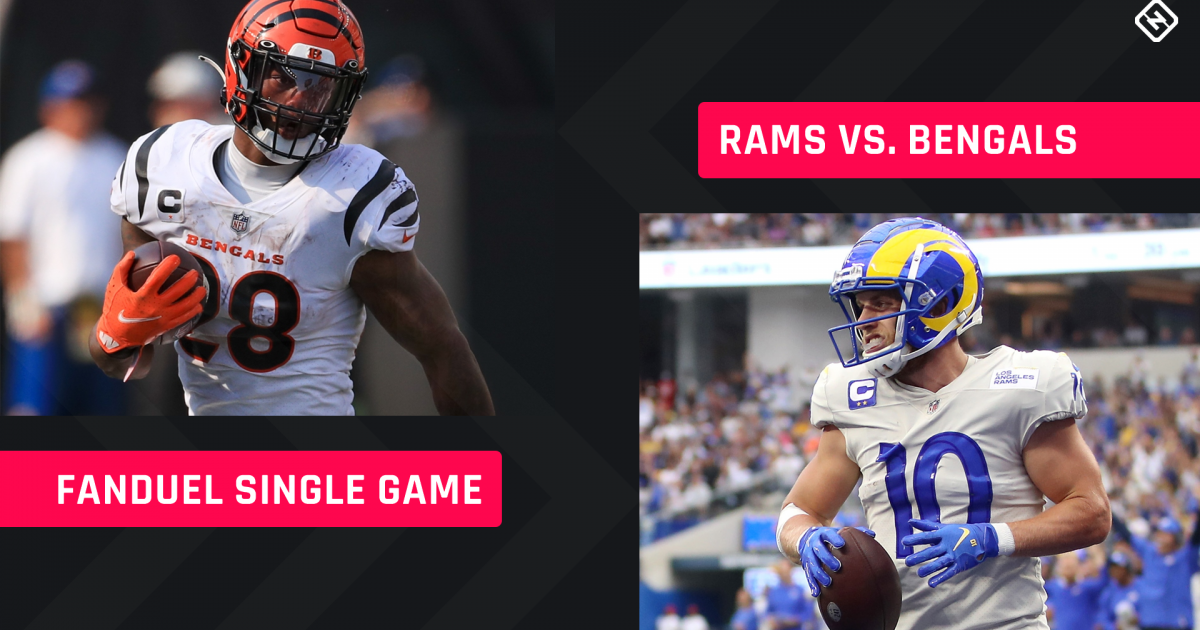 The stage is set for Super Bowl 56, and in a matchup few expected at the beginning of the season, the Rams and Bengals will meet in L.A. As is usually the case by the time we get to the Super Bowl, both teams have offenses full of starsand stellar defenses. For our FanDuel single-game lineup, we’re leaning Rams but grabbing a few key Cincinnati players, but either way, if you’re paying up for a star QB and WR, then you’ll need at least one or two value sleepers to round out your DFS picks and hopefully have a profitable Super Sunday.

It’s beyond chalky to pick Kupp as “MVP,” but it’s also ultra-risky not to. He’s had a half-season’s worth of production for many WRs in just three playoff games (25-386-4), and it’s proven impossible for defenses to “take him out” even a little bit. Barring injury, it’s tough to envision a scenario where he doesn’t do well. Could someone do better? Of course, but Kupp is the safest bet by far. We’ll look for differentiation elsewhere.

Stafford has been nearly as automatic as Kupp in the playoffs, posting eight total TDs and over 900 passing yards. There’s a good argument for him as “MVP” with the hopes Kupp has a down game (by his standards), but we’ll merely flex Stafford and trust Kupp is on the receiving end of his passes more than any other Rams’ receiver.

By starting with a Stafford-Kupp stack, we can’t really afford Joe Burrow ($15,500), so it comes down to whether we want another Ram (OBJ? Cam Akers?) or a Bengals playmaker. We opted for Mixon, who has a found way to produce the past two games despite some tough matchups (220 total yards, TD, nine catches). It’s easy to envision the Bengals’ pass protection having issues against L.A.’s superior pass rush, so more runs and/or checkdowns to Mixon seem likely. Ja’Marr Chase has a higher ceiling but lower floor and another high-priced Rams’ skill guy seems like overkill, so we’re hoping Mixon can give us a solid baseline of production. If things break right, a two-TD game isn’t out of the question either.

With four field goals, including three 50-plus-yarders, in each of Cincinnati’s three playoff games, McPherson has been a solid, consistent source of points. He should be busy again, as L.A.’s defense will certainly limit Cincinnati’s ability to get the ball in the end zone. It’s tough to expect another four field-goal attempts, but McPherson is a safe bet to come through when his number is called. He doesn’t have the highest ceiling, but in a game where touchdowns could be at a surprising premium, McPherson could easily be among the top scorers.

Obviously, we didn’t have much money left over, and with FanDuel’s tight pricing, we didn’t have many “real” options. Sure, we could try Samaje Perine, Ben Skowronek, or Drew Sample and hope for a TD (Perine scored last game and Skowronek should have), but we’re going for a little more substantial of a player. Jefferson hasn’t done much in the playoffs (five catches, 79 yards, no TDs), but he had five targets last game and is still a key big-play threat. The ceiling here is pretty high for a $7,000 player, and while the floor the low, that’s the risk we have to take. Our “low-ceiling” player (McPherson) has a high floor, which will put us in a much better spot than those with the Samples and Skowroneks of the world — if Jefferson pays off, that is.