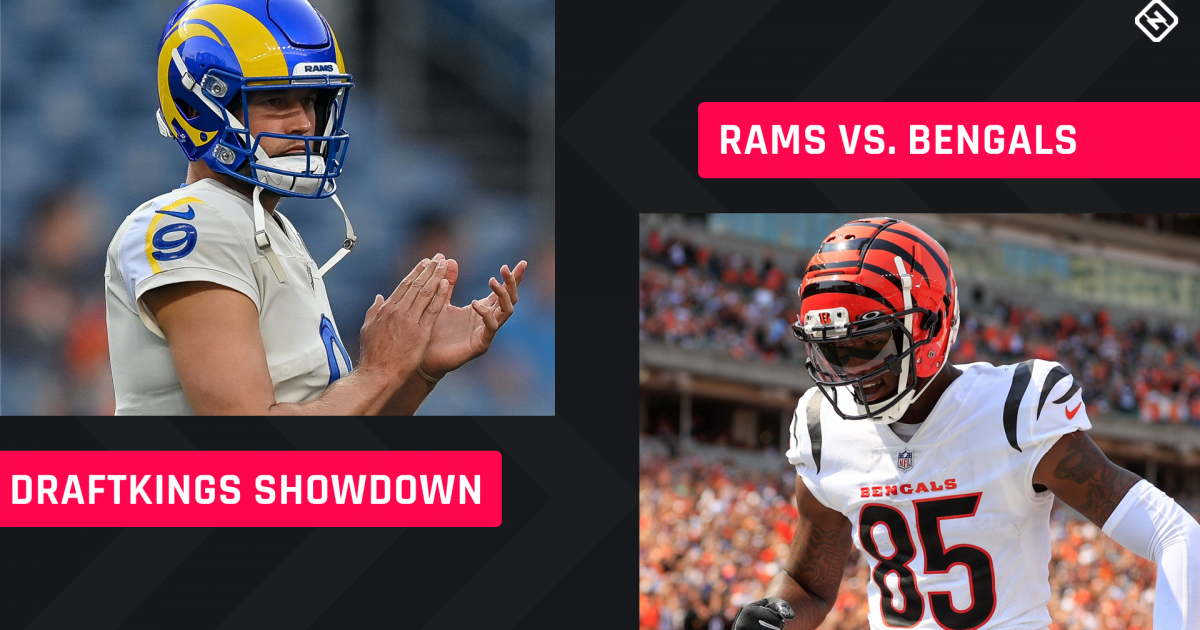 If you like building NFL DFS single-game lineups around a stud QB and an even bigger stud WR, then Super Bowl 56 is the matchup for you. Whether you prefer a Matthew Stafford/Cooper Kupp stack or a Joe Burrow/Ja’Marr Chase pairing (or neither), you can still find some solid mid-priced players and value sleepers to round out your DraftKings Showdown lineup. We’re leaning Stafford/Kupp (though neither are our “Captain”), but there’s no better time than Super Sunder to take some chances,play multiple daily fantasy single-game lineup, and try different combinations.

Here are the important settings for DraftKings single-game contests: It’s  full-point PPR, and there are three-point bonuses for 300 passing yards, 100 rushing yards, and 100 receiving yards. The Captain pick costs 1.5 times a player’s original price, but he also gets his point total multiplied by 1.5.

Beckham has been a major contributor throughout the playoffs, catching 19-of-23 targets for 236 yards and a TD. Cooper Kupp remains the most likely Rams receiver to score or just have a big game in general, but OBJ will get his share of targets and big-play chances (including the occasional pass). Given that Kupp costs almost $5,000 more to captain, we’ll take the savings, give ourselves 80 percent of his ceiling, and still flex Kupp. Obviously, if you’re on the Bengals more than the Rams, you could go with a variety of other players here, but if you like L.A., getting someone like OBJ makes sense.

In three playoff games, Kupp has posted 25 catches, 386 yards, and four TDs. As always, you can fade him and be in a great spot if he has a down game, but you’re more likely to be left below the cash line. Kupp is such a sure thing, you almost have to have him somewhere in your lineup.

Stafford has made some mistakes in the playoffs, but with 905 passing yards and eight total TDs, he’s still posted plenty of fantasy points. Stafford is a slightly better bet than Joe Burrow to hit the 300-yard bonus, and he also has just as high of a rushing and TD upside. There’s a good arguement for trying to squeeze in both QBs, but if you can just get one, you basically have to decide which team you like to win. That’s especially true for the Rams, who have been struggling on the ground the past few games.

With our Stafford-Kupp-OBJ stack, it’s almost impossible to pay up for Ja’Marr Chase ($10,400) or Joe Mixon ($9,600) and still field a competent final two roster spots. We’re fine pivoting to Higgins, who’s actually had more receptions (13) and targets (19) than Chase (11 and 15, respectively) in the playoffs. Chase has been more impactful and has a higher ceiling even with concerns about Jalen Ramseey’s coverage, but Higgins should continue functioning as a key target on quick slants — something Cincinnati could throw more often to combat L.A.’s fierce pass rush.

The Bengals’ much-maligned offensive line allowed just one sack against the Chiefs after giving up nine to the Titans, but the Rams have a better pass rush than both teams. After finishing third in the NFL with 50 sacks during the regular season, chances are Joe Burrow will get taken down a few times and be pressured into a couple mistakes. Cincinnati has explosive playmakers, but even if the Rams give up yards and points, there’s a clear path to them paying off this relatively cheap price.

McPherson has been money for the Bengals and daily fantasy players in the playoffs. He’s connected on all 12 of his field-goal attempts (four in every game) and his four PAT attempts, and that includes three kicks from 50-plus yards. With conditions unlikely to be a factor in L.A.’s covered-but-open-air stadium, McPherson is a good bet for multiple field goals again. At his price, he should easily pay off, as Cincinnati figures to move the ball but perhaps have some trouble putting it into the end zone (again).