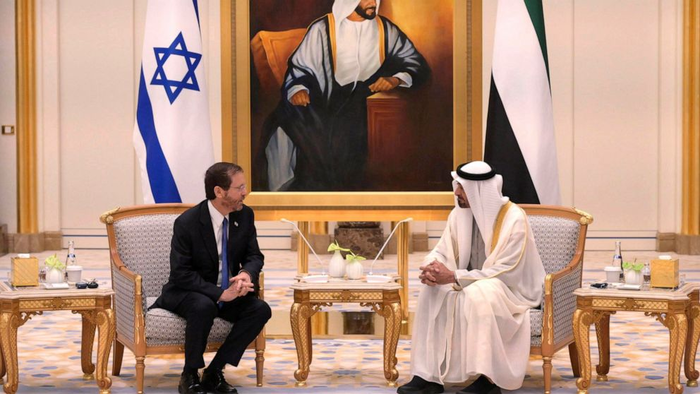 It’s the third such missile or drone attack from Iran-backed Houthi rebels in Yemen this month, as the Houthis are now attempting to take the fight to the UAE and not just targeting the Saudis (as the Emirates have long assisted the Saudi war on Yemen going back to 2015).

“The attack caused no damage, the UAE defense ministry said, but follows a series of unprecedented strikes on the country this month by the Iran-backed Houthi militants in Yemen,” CNN reported. Rather than leave the country, Herzog is said to have “pressed on” with his visit.

Further, the Houthis owned up to the strike, specifying that they timed it with the Israeli president and delegation’s visit:

A Houthi spokesman said the group launched “missiles and aircraft” at “important and sensitive” targets in the UAE and indicated that the attack was intended to disrupt the Israeli President Isaac Herzog’s visit.

The President and his entourage were in no danger, an Israeli presidential spokesman said, and the visit continued as planned. Herzog visited Expo 2020 in Dubai — the UAE’s commercial hub — on Monday and met with UAE Prime Minister Mohammed bin Rashid Al Maktoum.

Over a month ago Israeli Prime Minister Naftali Bennett had became the first Israeli leader to visit the UAE, coming after the Abraham accords signed during the Trump administration formalized peace and restoration of diplomatic relations between the two countries.

Just last week the US State Department took the rare step of issuing a travel advisory warning Americans about the increasingly dangerous situation in UAE, now being routinely targeted by the Houthis.

“The possibility of attacks affecting US citizens and interests in the Gulf and Arabian Peninsula remains an ongoing, serious concern,” the travel advisory said. It added: “Rebel groups operating in Yemen have stated an intent to attack neighboring countries, including the UAE, using missiles and drones. Recent missile and drone attacks targeted populated areas and civilian infrastructure.”

Meanwhile, the Houthis have vowed to destabilize the UAE, once thought among the safest and economically prosperous places in the Middle East: “The UAE ceases to be a safe place so long as the tools of the Israeli enemy in Dubai and Abu Dhabi are used against our people and our country,” said Houthi spokesman Yahya Al Saree in a televised announcement.

Prior attacks from Yemen came on January 17 and January 24, which left three foreign workers dead and multiple injured in the UAE capital. The Houthis have meanwhile vowed to expand their military operations against the country. Washington has long accused Iran of delivering increasingly sophisticated missiles and drones to the Shia Houthis, which is giving the militant group longer reach to hit places like Dubai.