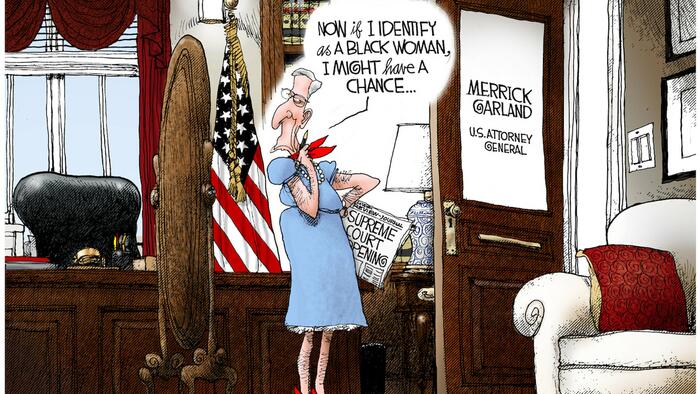 We have been discussing the controversial pledge of President Joe Biden two years ago that he would only consider black women for the first vacancy to the Supreme Court. While past presidents have said that they wanted to appoint nominees who were female or black, they all considered a diverse set of candidates and had “short lists” that included different races and genders. Biden has promised that he will not consider males or non-black candidates. Now, an ABC News/Ipsos poll shows that 76 percent of Americans reject such a threshold exclusionary rule based on race or gender.

During the primary, Biden wanted to garner support with black voters by saying that he would only consider black women for the next seat. He made the pledge after Rep. James Clyburn pushed him to do so during a break the presidential debate — Biden turned around and made the commitment when the debate resumed according to a new book. Clyburn later gave Biden his critical endorsement that many (including Biden) attribute his victory to in the key South Carolina primary.

As discussed previously, commentators have insisted that Ronald Reagan, Donald Trump, and George H.W. Bush made the same pledge. That is also false. While seeking to appoint women and African Americans, none of the three excluded other races or genders from consideration and had diverse short lists. Yet, even if they did, the question remains: should admission to the Court be based on an exclusionary threshold qualification that the Court has rejected as unconstitutional or unlawful for schools and businesses.

Notably, even 54 percent of Democrats agreed that Biden should consider all potential candidates.

“Just 23% want him to automatically follow through on his history-making commitment,” according to ABC News. Yet, Democratic senators have applauded Biden for his pledge.

That is roughly the same quarter of voters that seems to drive much of the policies in the Biden White House — an agenda that has politically marginalized the President with many voters.

As I have previously written, none of this was necessary. President Biden could have stated his intention to seek a black female nominee without closing consideration to any other race or gender.