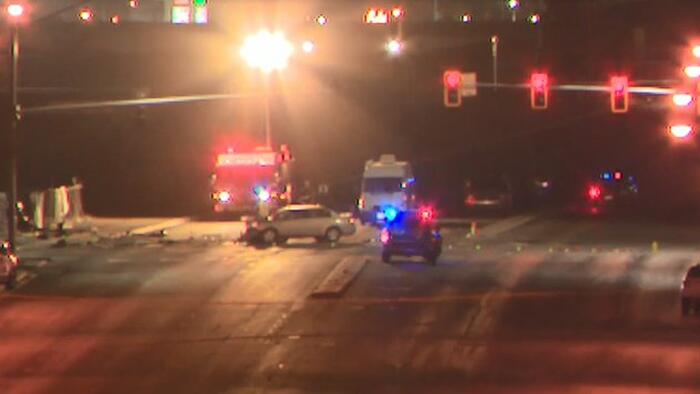 
North Las Vegas Police are calling a six-vehicle crash a “mass-casualty traffic collision,” indicating they’ve never seen anything like this before, according to NBC News.

“We have not seen a mass-casualty traffic collision like this before,” Alexander Cuevas, an office of the North Las Vegas Police who spoke with reporters late Saturday.

⚠️🇺🇸#BREAKING: Nine dead, several others injured following multi-car crash in Las Vegas#LasVegas l #NV
According to police, a Dodge Challenger sped through an intersection before colliding with vehicles stopped ahead. Children are amount the dead.
Investigations are ongoing. pic.twitter.com/tlrFSDwS9F

On Saturday, a Dodge Challenger blew through a red light on Commerce Street and slammed into multiple cars “at a high rate of speed,” Cuevas said, citing one bystander who witnessed the incident unfold. The collision involved 15 people.

“And, with that, it struck multiple vehicles and, unfortunately, it was a chaotic event,” Cuevas said.

Nine people died due to the crash, and six suffered non-life-threatening injuries.

Cuevas said the coroner would release the names of the deceased. He added the dead ranged from young juveniles to middle-aged adults. The driver of the Challenger is also among those of the deceased.

“Our thoughts and our prayers are with the families who are experiencing a tremendous and unnecessary loss due to a careless, senseless act,” Pamela A. Goynes-Brown, a member of the North Las Vegas City Council, said.

Besides the high rate of speed, there’s no motive for why the driver decided to run the red light.