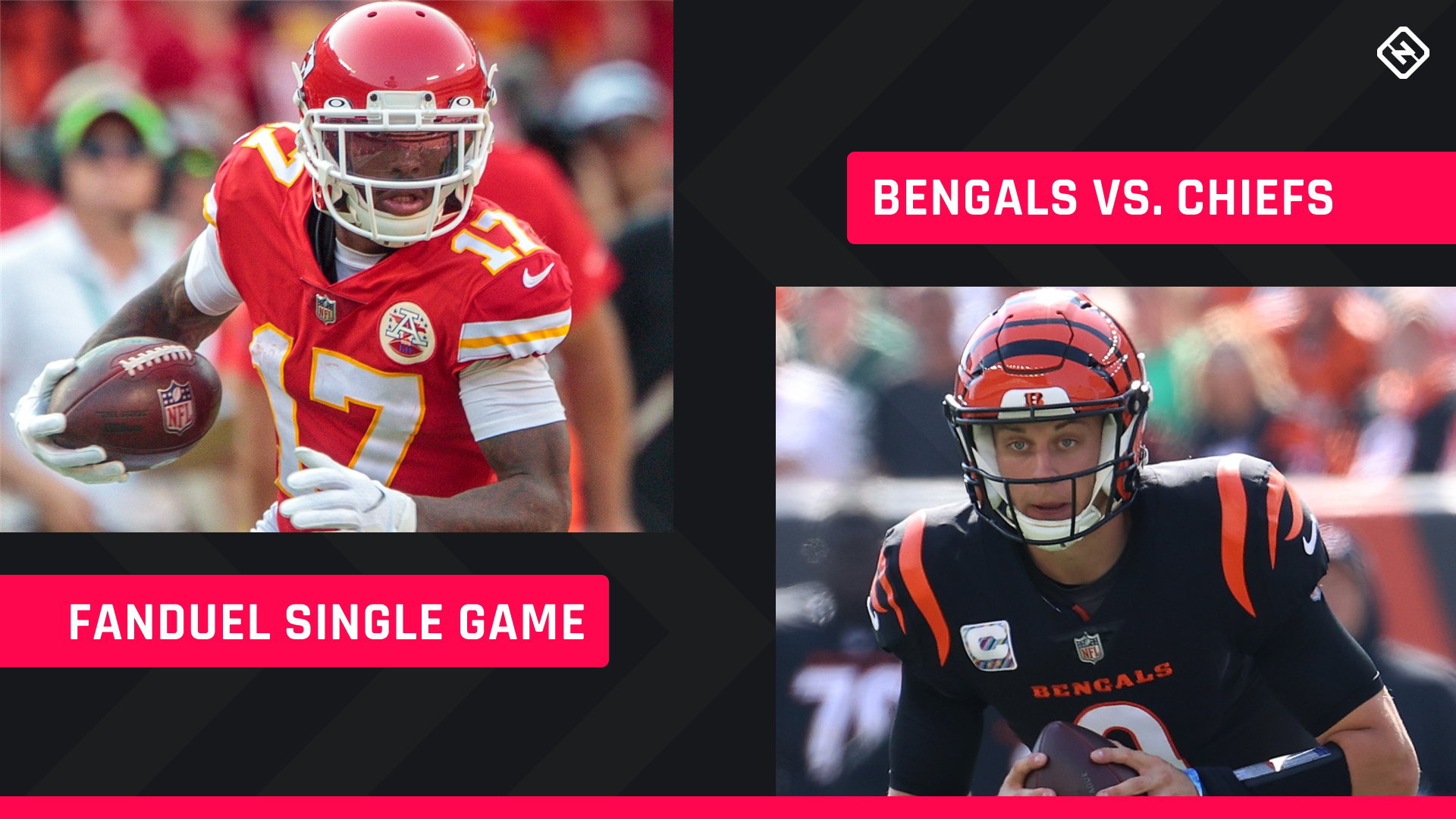 The second round of the NFL playoffs was one of the best weekends of football in recent memory, and we can only hope the NFC and AFC Championship games match that level of excitement. DFS players in single-game tournaments are undoubtedly more excited about the AFC clash between the Bengals and Chiefs with stars like Patrick Mahomes, Ja’Marr Chase, Tyreek Hill, Travis Kelce, and Joe Burrow available. Our FanDuel lineup balances the two squads and includes both QBs, but with stars and value sleepers aplenty, you could go a variety of ways for your picks.

This is so chalky, it might actually be smarter to fade Mahomes (at least as an “MVP”) and opt for someone else if you really want to win your single-game tournament. But if Mahomes goes off like he has the past two weeks (782 passing yards, 98 rushing yards, nine total TDs), you could very well fail to cash at all. Sure, we might have another Gabriel Davis situation where a random Bengals’ player has a huge game and pays off in this slot, but we’ll take the chalk here and hope to differentiate elsewhere.

Burrow has as much upside as Mahomes (and a similar matchup on paper), so you could just as easily name him your “MVP.” With Kansas City banged up in the secondary, Burrow could match his yardage total from last week (348 yards) with multiple TDs. He likely won’t hit his numbers from Cincinnati’s Week 17 matchup with Kansas City (446 yards, four TDs), but with all the throwing he’ll likely be required to do to keep pace with Mahomes, Burrow is another pick that’s worth the chalk.

Edwards-Helaire played second fiddle to Jerick McKinnon last week, but he was the more dynamic runner, racking up 60 yards on just nine carries. We’re hoping more players go with McKinnon and CEH is a sneaky pick in his second game back from a sore shoulder. Edwards-Helaire might never be the elite receiving back many thought he’d be coming out of college, but he has upside as a tough, elusive runner in a high-powered offense. Here’s hoping for a TD

After scoring in four straight games, Boyd was shut down last week, catching just two-of-three targets for 17 yards. However, if last week was any indication, the Chiefs could have a problem with secondary receivers, and Boyd is the type of sharp route runner who could really make them pay. Expect over five targets and several opportunities to score and/or make a big play.

Hardman showed his big-play ability last week, catching a key 26-yard pass and running for a 25-yard TD. Normally, we like to avoid secondary Chiefs receivers who scored the previous week, but considering Hardman received just one target, we think he could be due for a bigger game this week. He torched the Bengals for a 53-yard reception in Week 17, and he’s the type of player who can score from anywhere on the field. With the way the Chiefs use him, we’re willing to take a shot in FanDuel’s half-PPR scoring.