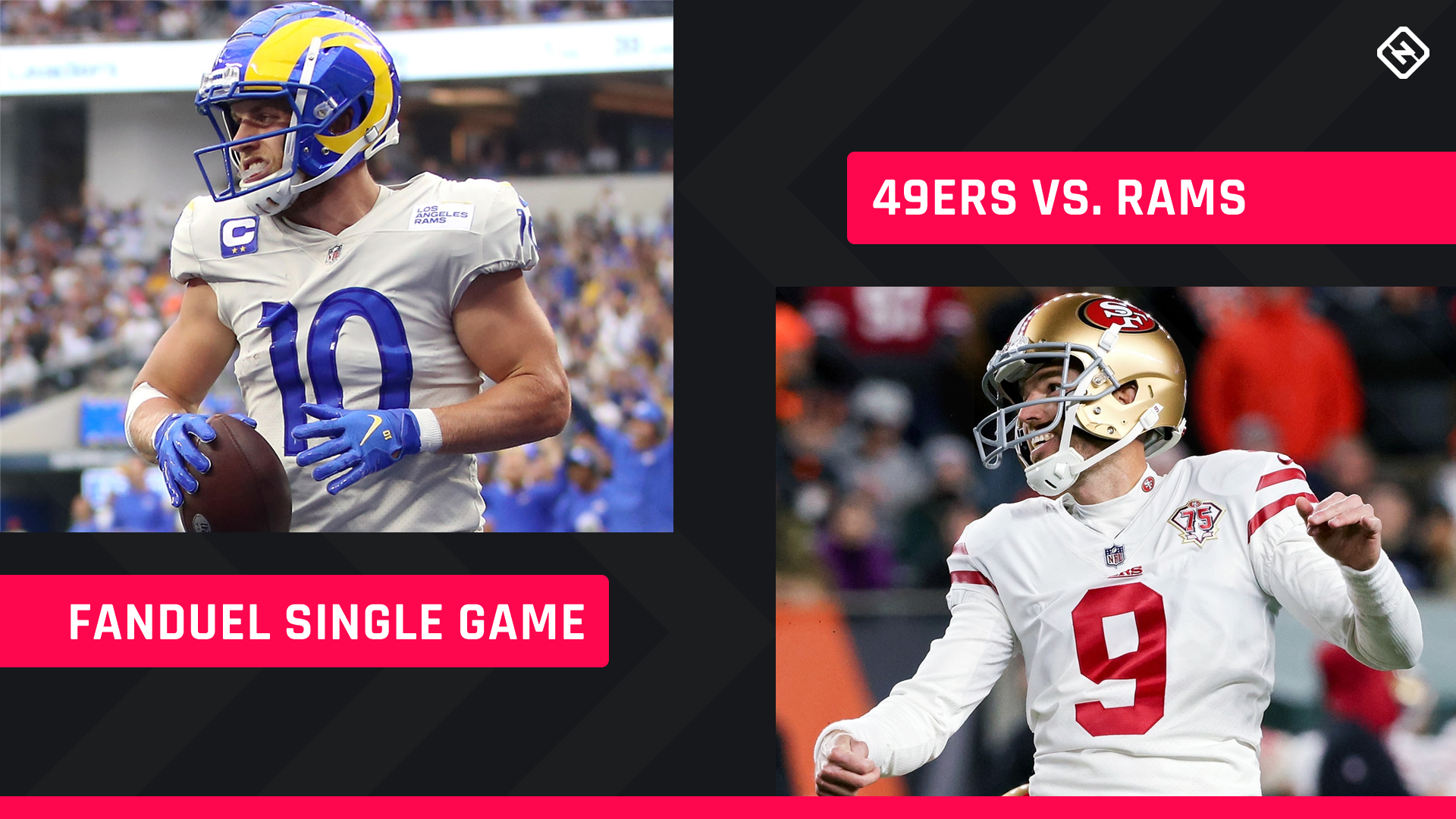 The 49ers and Rams get ready for their third showdown of the season in the NFC Championship game, and if you’re putting together a FanDuel single-game lineup, you’re likely building your picks around Cooper Kupp and Matthew Stafford. You don’t have to, of course — in fact, if you’re really gunning for a top spot in your DFS tournament, you might want to fade one or both players — but that’s how we’re starting our squad. As a result, we need to find some differentiation elsewhere, and we’re going with a couple value sleepers who can hopefully help us cash.

It’s tough to make a case for fading Kupp. His worst game this year resulted in 8.9 FanDuel points. His next-worst game was 12.7. That’s the kind of floor you want from your “MVP,” especially when you factor in that he’s already fried the 49ers twice this season (11-122 and 7-118-1). We’re more than willing to be chalky when it makes this much sense.

For whatever reason, Stafford has had some trouble with San Francisco this year. He’s throw multiple INTs and posted fewer than 244 yards in both games against the Niners. We’re hoping that scares away others and we actually get him at slightly depressed ownership. He’s the key to L.A.’s offense, and after a 366-yard, three-TD game, we expect Stafford to be leaned on heavily in this one. He has the weapons to do it, so we’ll gladly pay up.

This pick is risky, as Akers lost two key fumbles last week. Will he get benched or see his carries — particularly near the goal line — get significantly reduced? Maybe, but that uncertainty is why we’re taking him. He’s clearly been L.A.’s lead back the past two games (44 carries, four receptions), and even though he hasn’t done much on the ground (103 yards), he’s contributed a decent amount overall (163 total yards). If the Rams continue feeding him, he’s a decent bet for a score and around 75 total yards. At depressed ownership, that’s all we need. If you want to be even more contrarian and take Sony Michel, that’s fine, too, but we’ll stick with Akers in this lineup.

There’s a very real chance Gould is the 49ers highest-scoring player this week. He’s had 10 field-goal attempts the past four games, and he’s made every one of them. He’ll be kicking in optimal conditions, too, and after last week’s 45-yard game-winner in the snow, there’s little reason to be worried about accuracy issues. The 49ers have had success against the Rams in the past, so it’s unlikely they’ll be shut down even if the Rams play better defense. That means ample opportunities for Gould.

Jefferson has received just seven targets the past three weeks, and he hasn’t scored since Week 14. He’s likely off a lot of people’s radars (especially with a “Q” tag because of a knee issue), but that’s fine with us. He remains a big-play receiver who can pad his stats with the occasional carry, so we’ll (hopefully) differentiate our lineup a bit and bank on him finding the end zone again.