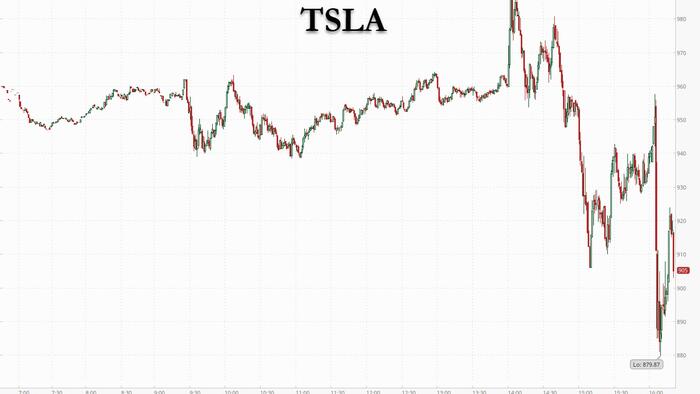 
As we previewed earlier, in today’s TSLA earnings call, investors are going to be watching for “details about when production will begin at new factories in Austin and Berlin” and “sales projections for 2022 after the company surprised with record deliveries in the fourth quarter”, as Bloomberg wrote. We reported that in Q4, Tesla gave up on $1.3 billion in German subsidies it had hoped for as part of the EV manufacturer’s new battery-cell plant in Brandenburg, close to Berlin.

The company may also offer color and face questions on Elon Musk’s stock sales, which amounted to over $10 billion worth of Tesla stock heading into the end of 2021. Recall, the company just posted a record delivery quarter for Q4. For 2021, the automaker delivered “over 936,000” vehicles, per a company press release. Those numbers were up about 87% from the year prior. The report also reminded that Tesla has said “repeatedly it expects 50% annual increases in deliveries over a multi-year period”.

In addition to sales and deliveries, investors will likely be watching the company’s vehicle mix and how it affects ASP, which declined 6% YOY last quarter.  It looks as though the phasing out of the Model S and the Model X is heading toward completion. Of the deliveries in the fourth quarter, 296,850 of them were Model 3 or Model Y vehicles, while just 11,750 were Model S or Model X vehicles.

Investors may also be looking for color on a slew of recalls that occurred toward the end of last year, with the automaker recalling what amounted to hundreds of thousands of vehicles, stemming from from opening and closing the trunk lid that may damage the rearview camera cable harness and increase the risk of a crash.

There is much more in the our full preview here.

So what that in mind, here is what Tesla just reported for Q4 moments ago:

So why is the stock tumbling after hours? It appears that the market is focusing on the same issues that have been here previously, but is only now paying attention: namely production bottlenecks and supply-chain challenges.

Here is the text that the market is focusing on:

“In Q4, we saw a continuation of global supply chain, transportation, labor and other manufacturing challenges, limiting our ability to run our factories at full capacity.”

As Tesla noted in its Q4 2021 investor update, the company “plans to grow its manufacturing capacity as quickly as possible. Over a multi-year horizon, we expect to achieve 50% average annual growth in vehicle deliveries. The rate of growth will depend on our equipment capacity, operational efficiency and the capacity and stability of the supply chain.”

And here is the big red flag: “Our own factories have been running below capacity for several quarters as supply chain became the main limiting factor, which is likely to continue through 2022”

The company also touched on supply-chain issue in another place in the slidedeck, saying that “after a successful 2021, our focus shifts to the future. We aim to increase our production as quickly as we can, not only through ramping production at new factories in Austin and Berlin, but also by maximizing output from our established factories in Fremont and Shanghai.”

Tesla also echoed what many other auto companies have said about 2022: those who have the chips will win: “We believe competitiveness in the EV market will be determined by the ability to add capacity across the supply chain and ramp production.“

And yet, Tesla’s warning is bizarre because just as it is warning about supply chain bottlenecks, it says that “Fremont factory achieved record production in 2021. We believe there is potential to extend overall capacity beyond 600,000 per year. We aim to maximize output from our Fremont factory while ramping new factories.”

Even more surprising, the company said that “over a multi-year horizon, we expect to achieve 50% average annual growth in vehicle deliveries.” Putting this in context, a 50% gain this year would be about 1.8 million vehicles. And even if Tesla does have issues, it’s outperformed the rest of the auto industry in its ability to adapt to shortages.

To be clear, a 50% gain this year would be about 1.8 million vehicles. And even if Tesla does have issues, it’s outperformed the rest of the auto industry in its ability to adapt to shortages.

Commenting on the results, Gene Munster of Loup Ventures said that “the current state of the business is doing exceptionally well,” said Munster. “But the commentary on the risk factors are taking on a different weight in the current environment. As a large cap company, you need to be pounding the table that everything is going well. Whenever there are unknowns about the future it can spook investors a little bit.”

So bottom line, great results but for a company that is trading on a ludicrous forward multiple, that is to be expected. Meanwhile, the market is spooked by continued supply-chain issues, and the stocks is down on the day, erasing an earlier loss of as much as 5% when TSLA stock hit a session low of $880 after trading at $987.69 earlier.

If these losses hold in regular trading tomorrow – and Tesla has a knack of staging miraculous recoveries during the Musk call – Tesla shares will go back to levels last touched in mid-December. The stock is currently down about 4%.

And if Powell’s mauling wasn’t enough, Tesla’s troubles are also weighing on shares of other electric vehicle startups as well, with several trading lower in postmarket trading such as Rivian down 2.3%, Lucid falling over 1% and Nikola down 1.6%.

The Tesla Q4 investor deck can be found here.