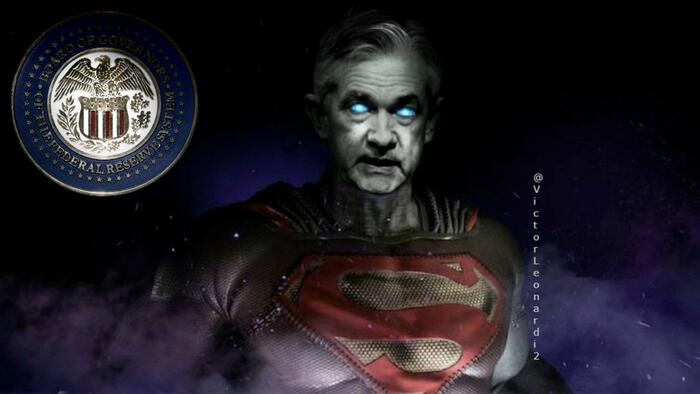 
It started off well enough: milliseconds after the Fed statement and associated Fed balance sheet “principles” were released, algos quickly skimmed the key bullet points before they realized that there were no landmines in the statement: indeed, all the biggest hawkish fears had been defused with the Fed not announcing an early end to tapering, an early start to rate hikes and certainly nothing on the fears 50bps rate hike.

Drilling into the statement, the Committee announced the final two reductions in the amount of their monthly asset purchases, which will bring purchases to an end in “early March” and the Committee now expects that it will “soon be appropriate” to raise the funds rate – which will almost certainly happen at the next FOMC meeting in March—and updated the statement to note that inflation is “well above” the FOMC’s two percent target (previously characterized as “having exceeded 2 percent for some time”) and that the labor market is “strong,” dropping the judgment that the economy is short of full employment.

So far so good, because there was nothing here that the market did not anticipate or had priced in.

And then Powell started talking… and all hell broke loose, as stocks, bonds, and gold all tumbled post-Fed as the dollar rallied.

So what exactly did Powell say to upset the algos so much?

Well, a few things, starting with Biden’s admission that the Fed is launching the most historic tightening cycle with virtually zero visibility, when he said “the outlook is quite uncertain.”

Paradoxically, when it comes to the pace of rate increases, Powell was non-committal… which is not hawkish on its own. But as Bloomberg notes, the market may struggle on how to interpret that as the presumed pace is once a quarter. It could leave the door open to a more aggressive path than currently projected. But it could imply a readiness to pull back if downside risks were suddenly realized.

That said, Powell apparently did have enough visibility to provide soft guidance: asked whether rate increases can undercut inflation without harming the labor market, Powell was optimistic, and issued a comment that immediately took the wind out of equity markets’ sails by signaling, inadvertently or not, a more lengthy tightening cycle than expected: “I think there’s quite a bit of room to raise interest rates without without threatening the labor market.”

But the final straw was when Powell admitted that the Fed is “willing to move sooner” and “perhaps faster” than last time in shrinking the balance sheet. adding that “we want the balance sheet to be declining in a predictable manner,” by adjusting the reinvestment of maturing debt, to try to clam the panic.

But that didn’t help as stocks all puked into the red for the day (and week), only to bounce the moment Powell stopped speaking…

And yes, we have another historic milestone: the S&P 500 erased a 2% advance for first time since April 2020 and was down 0.3% at the close. The Nasdaq managed to desperately scramble back to unchanged on the day…

In his post-mortem of Powell’s presser, Bloomberg’s Intelligence economist Carl Riccadonna said the market reaction to the presser (particularly the move in the short end of the yield curve) seems to hinge on signaling from Powell that they’re going to do more on the interest-rate front initially, especially since Powell said that the committee has not yet gelled around the plan for balance-sheet runoff.

Echoing this sentiment, Alex Chaloff, co-head of investment strategies at Bernstein Private Wealth Management, notes that a hawkish sounding Powell is the driver for the selloff, and identifies this remark from the Fed chair as setting the tone: “I think there is plenty of room to raise rates without threatening the labor market.” Chaloff concludes: “That’s bold for someone as careful as Powell.”

Others were even more critical: Jason Brady, president and CEO at Thornburg Investment Management, said that “many commentators have made the point that the Fed does not want to ‘surprise’ markets. I think that is simultaneously true and regrettable. It is precisely in giving markets what they want in the near term that the Fed has painted itself into a corner.”

Of course, it is possible that Powell was merely clueless instead of telegraphing to the market what it will do. This is certainly possibly considering that financial conditions have tightened materially since the Fed’s hawkish pivot last November – with much of the Nasdaq (and S&P) now in a bear market –  and this is surely factoring into policymakers’ assessment of the appropriate pace of normalization.

Indeed, as Bloomberg put it, “A predictable normalization path should help engineer an easy landing, but if financial conditions tighten too sharply between now and then, particularly in the credit markets, the Fed risks inducing a sharper economic slowdown than they may deem desirable.”

But for now algos are selling first, and asking questions later as the dismal market reaction to Powell’s presser confirms, which manifests itself not only in the puke in risk assets which have wiped out all intraday gains and are now down on the day, but also in the far more ominous, and recession pre-signaling collapse in the yield curve.

Bonds were a bloodbath with the short-end dramatically underperforming…

This was the biggest jump in 2Y Yields since March 2020…

The yield curve flattened significantly – some might it collapsed – to its flattest since April 2020…This is screaming a Fed policy error is imminent.

The dollar surged above yesterday’s highs, back near its highest level of the year…

Bitcoin pumped and dumped after The Fed, reaching $39k before dumping back below $37k…

Gold was clubbed like a baby seal as the dollar ripped…

Oil prices remain higher, despite weakness post-Fed as geopolitical tensions dominated. WTI made it back above $87 intraday – its highest since Oct 2014…

Finally, we note that a crashing stock market will probably not help the situation in this chart…

Additionally, Bloomberg’s Ye Xie raised the specter of Powell’s rookie mistake in 2018… Back then, his hawkish comment that Fed policy needs to “go past neutral,” and “we’re a long way from neutral at this point, probably” caused market turmoil. Well, this comment today is likely to have taken the euphoria out of the stock market:

“I think there’s quite a bit of room to raise interest rates without without threatening the labor market.”

That’s certainly wasn’t music to ears of stock investors then and likely won’t be now either.

Time to unleash the FedSpeak!