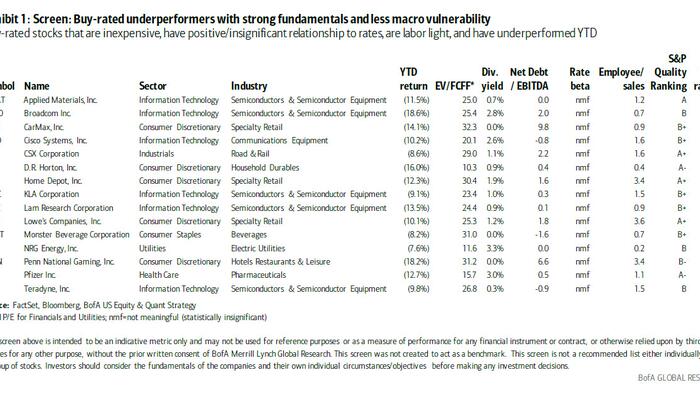 
One week after taking an early victory lap when the slumping S&P hit her year-end price target more than 11 months early, BofA’s chief equity strategist Savita Subramanian reminds the bank’s clients of just how devastating the market move in recent days has been with yet another post-mortem of the recent market markets.

In a note published this morning, Savita puts the recent meltdown in markets in context, Savita points out the following:

And while Savita remains bearish – as we noted last week – writing that it may be too early to buy Tech wholesale, as both InfoTech. and Comm Services are crowded, expensive and in many cases susceptible to rate risk, Bank of America is starting to find “some Tech stocks along with other companies that now look attractive.”

Which is not to say that Subramanian has joined Kolanovic in turning all out bullish: she merely notes that some (much) of the market froth has been taken out to wit: “Equities sold off in tandem with an increase in real yields, popping some bubbles and pushing stocks closer to intrinsic values. The S&P 500 fwd PE dipped below 20 (to 19.6x) for the first time since COVID. But its PE is still 25% above average (15.6x), and tepid earnings growth (see earnings outlook) coupled with the end of free money indicate flattish returns through 2023 (see Is it 2023 yet?).”

The biggest hurdle preventing the BofA strategist from turning full Jim Cramer is that, as she warns, the “Fed’s dual mandate doesn’t including supporting the S&P.” Indeed, it’s true that the Fed took unprecedented action in the early stages of the pandemic to support the economy, with what Savita says was “a notable side benefit being the support of asset prices” – to put it mildly -but going forward that strategist notes that “investors should not assume the Fed will step in to placate volatile markets today: inflation is at multi-decade highs, and the unemployment rate is sub-4%.” Instead, given the Central Bank’s dual mandate, tightening is wholly appropriate. And while some stocks fare well amid rising cash yields, rates and inflation, “the S&P 500 overall may be vulnerable given its disproportionate weight in beneficiaries of low rates / no inflation.”

We disagree: while it is true that the Fed would condone a modest drop – and already has – any accelerating market crash, especially in a country that is hyperfinancialized and where financial assets are more than 6x US GDP…

… would promptly destroy the carefully erected Wealth Effect which has been the only true legacy of the Fed since the global financial crisis, and as such the Fed will certainly step in. The only question, as we have been discussing for months, is what is the strike price on the Fed put.

With that aside, we turn to the topic of this post, namely which are the handful of stocks where even the bearish BofA thinks dip buying can take place. As Subramanian writes, of the 196 stocks lagging the S&P 500 YTD, she has extracted a short list – 15 companies – with strong fundamentals and less macro vulnerability. These are Buy-rated stocks that have underperformed the S&P 500 YTD, offer higher Free Cash Flow to Enterprise Value (FCF/EV) vs. sector peers, and fail to exhibit statistically strong relationships with rates and are labor-light relative to sector peers.

The results are shown below.