Fundamental Forecast for the US Dollar: Neutral

US Dollar Week in Review

The US Dollar snapped back last week, with the DXY Index closing up by +0.49%, nearly eradicating its losses month-to-date (although remains -0.04% lower in January). With the drums of European war beating louder, EUR/USD rates notched a -0.62% loss, while GBP/USD rates fell by -0.86%. Weakness in risk assets duly stoked demand for safe havens, with USD/CHF rates dropping by -0.22% and USD/JPY rates slipping by -0.43%.

US Economic Calendar in Focus

The upcoming week’s economic calendar will prove consequential. The first Federal Reserve policy meeting of the year has already stoked a great deal of speculation in financial markets, with high expectations for hints of an accelerated rate of monetary tightening. Wednesday’s FOMC meeting could represent a significant turning point for a number, not just for the US Dollar, but for all currencies and asset classes. 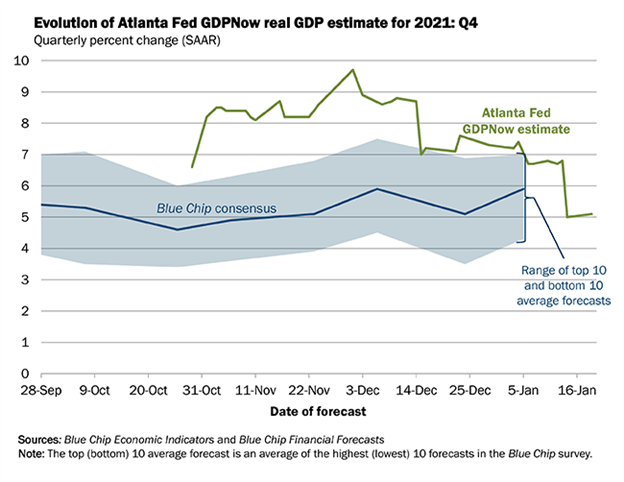 Based on the data received thus far about 4Q’21, the Atlanta Fed GDPNow growth forecast is now at +5.1% annualized, up from +5% on January 14. The upgrade was a result of “the nowcast of fourth-quarter real gross private domestic investment growth increased from +18.1% to +18.6%.”

The final update to the 4Q’21 Atlanta Fed GDPNow growth forecast is due on Wednesday, January 26 after the December US goods trade balance and December US new home sales figures are released.

We can measure whether a Fed rate hike is being priced-in using Eurodollar contracts by examining the difference in borrowing costs for commercial banks over a specific time horizon in the future. Chart 2 below showcases the difference in borrowing costs – the spread – for the February 2022 and December 2023 contracts, in order to gauge where interest rates are headed by December 2023. 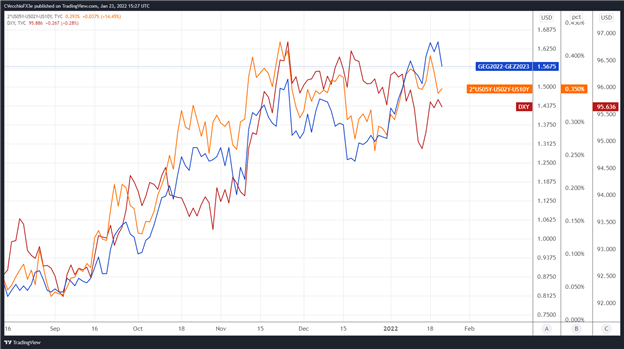 By comparing Fed rate hike odds with the US Treasury 2s5s10s butterfly, we can gauge whether or not the bond market is acting in a manner consistent with what occurred in 2013/2014 when the Fed signaled its intention to taper its QE program. The 2s5s10s butterfly measures non-parallel shifts in the US yield curve, and if history is accurate, this means that intermediate rates should rise faster than short-end or long-end rates. 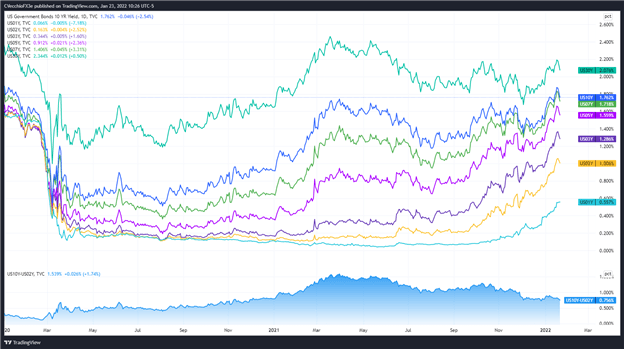 The retracement in Fed hike odds coupled with declining US Treasury yields poses a problem for the US Dollar, however. If the FOMC makes clear that it will not hike rates by 50-bps in March, or suggests that inflation pressures are due to subside further – implicitly suggesting that aggressive tightening isn’t warranted – then the US Dollar remains vulnerable to another swing lower. 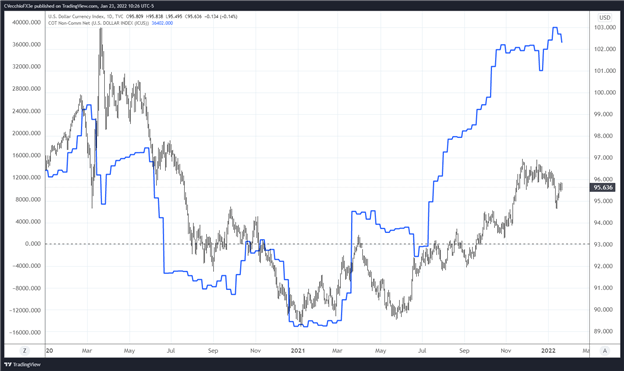 Finally, looking at positioning, according to the CFTC’s COT for the week ended January 18, speculators decreased their net-long US Dollar positions to 36,402 contracts from 37,860 contracts. Despite having fallen for two weeks, net-long US Dollar positioning remains near its highest level since October 2019, when the DXY Index was trading above 98.00. The oversaturated net-long position in the futures market remains a headwind for significant US Dollar upside in the near-term.