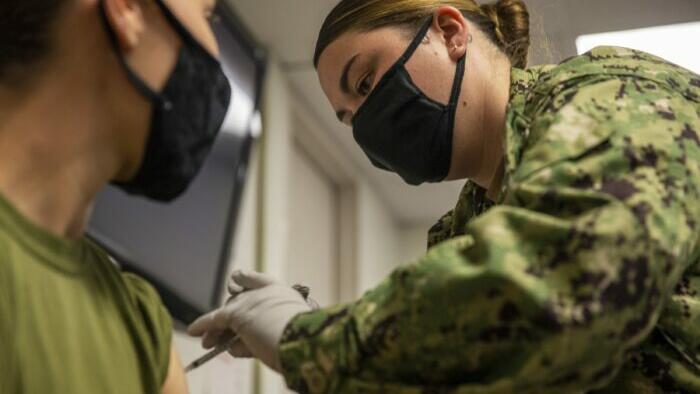 
By Zachary Stieber of The Epoch Times

The U.S. Marine Corps has kicked out another 45 Marines for refusing to get COVID-19 vaccines, the military branch announced Thursday. The Marines were removed “for vaccine refusal,” a spokesman said in a statement.

Any active-duty Marine who did not finish their primary COVID-19 vaccine regimen by Nov. 14, or any reserves who did not complete the process by Dec. 14, is considered unvaccinated by the branch.

Primary regimens are two doses of the Moderna or Pfizer vaccines or the single-shot Johnson & Johnson jab.

All unvaccinated Marines without a pending or approved exemption application, or a pending appeal of a rejected exemption request, are being processed for separation. The branch reported last week that 351 Marines had been discharged for vaccine refusal but corrected the number to 289.

The number of Marines who have been booted for not getting a vaccine is now at 334.

There were approximately 179,678 active-duty Marines and 35,240 Marine reservists, according to data current as of September 2021.

Ninety-five percent of active-duty Marines have completed their primary vaccination regimen, or are fully vaccinated, according to the Marine Corps. Another 1 percent are partially vaccinated, having gotten one shot of the two-dose Moderna or Pfizer primary regimen.

As of Jan. 19, 635 administrative or medical exemptions to the vaccine mandate have been approved, as well as just two religious exemption requests.

Defense Secretary Lloyd Austin announced the vaccine mandate, with support from President Joe Biden, in August 2021, and directed the heads of each military branch to outline specifics for their troops, including deadlines for becoming fully vaccinated.

Austin made the announcement after Pfizer’s vaccine received regulatory approval, but multiple vaccines, including those without approval, are allowed under the mandate. Some troops are getting vaccinated in other countries.

Other branches have also reported high numbers of compliance with the mandate, though the Air Force has kicked out 100 active-duty airmen, the Navy has removed 20 members, and the Army has relieved six active-duty commanders and reprimanded thousands of soldiers.

Several court cases challenging the mandate are ongoing, including one in which a group of troops successfully convinced a federal judge to block the mandate for them over the military’s broad refusal to grant religious exemption requests.