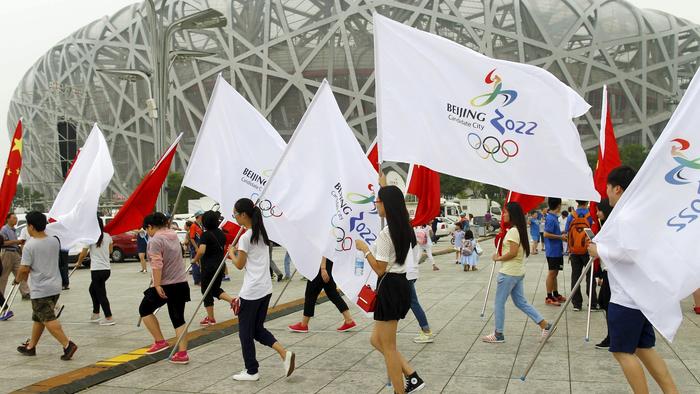 
The same week that Western media outlets and privacy advocates have issued warnings that athletes who bring their personal smart phones to Beijing’s winter Olympic games will leave themselves open to Chinese state surveillance, given that a new app developed by Beijing to track Olympic athletes’ health data has been found to have several startling security flaws, top China officials have a message of their own…

“A member of China’s Olympics organizing committee warned that foreign athletes may face punishment for speech that violates Chinese law at the 2022 Winter Games, spotlighting concerns about the country’s restrictions on political expression,” The Washington Post writes Wednesday.

Yang Shu, an official on the Beijing Organizing Committee, told a Tuesday news briefing that “Any expression that is in line with the Olympic spirit I’m sure will be protected.” However he stipulated, “Any behavior or speech that is against the Olympic spirit, especially against the Chinese laws and regulations, are also subject to certain punishment.”

Despite the International Olympic Committee (IOC) also maintaining a firm prohibition against the games being turned into a venue for political protest, the United States has of late lobbied for athletes being allowed to highlight global human rights issues in a “respectful” way.

But in emphasizing that China will keep a watchful eye on anything that runs counter to “Chinese laws and regulations” – there are concerns that enforcement will be stricter for these upcoming games, given it’s on Chinese soil, as WaPo explains:

But China’s formulation of its rule appeared to be a shade stricter than the IOC’s, raising questions about how Beijing plans to interpret and enforce it. Rule 50 of the IOC charter forbids “demonstration or political, religious or racial propaganda” at Olympic venues. Yang said Tuesday that “speech” could be subject to punishment and cited Chinese law, which is far more restrictive than many countries’.

This comes simultaneous to the statements of human rights organizations, who are reportedly busy advising that athletes need to watch what they say to avoid the long arm of Chinese law and speech restrictions, including potentially on social media, given also the recent controversy and brief “disappearance” of tennis star Peng Shuai.

As CBS has detailed, “According to the IOC, athletes can enjoy freedom of speech while speaking with journalists or posting to social media during February’s Winter Games. The committee hasn’t, however, announced any measures to protect protesting athletes from Chinese persecution.”

However, a statement from Human Rights Watch concerning the situation described: “We know the human rights record and the allowance of freedom of expression in China, so there’s really not much protection.”