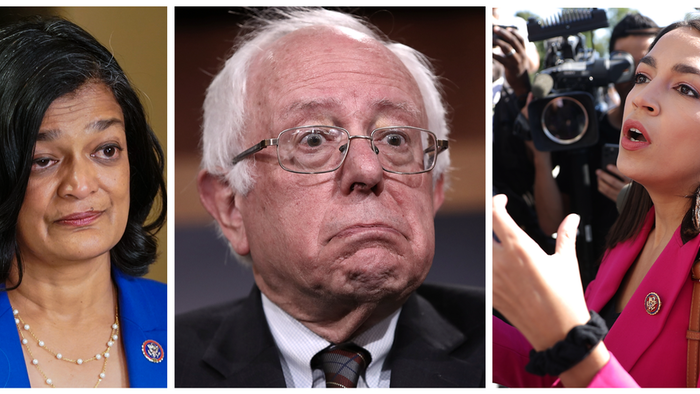 
Authored by Michael Shellenberger via Substack,

Progressives say they care more about working people and climate change than Republicans and moderate Democrats. Why, then, do they advocate policies that make energy expensive and dirty?

Progressive Democrats including Sen. Bernie Sanders and Rep. Pramila Jayapal, the head of the House progressive caucus, have sent a letter demanding the Federal Energy Regulatory Commission (FERC) investigate whether “market manipulation” is causing natural gas prices to rise 30 percent on average for consumers over last winter, an astonishing $746 per household.

In 2020, Sanders celebrated efforts by progressives to cancel the Atlantic Coast pipeline. Today, New England is facing rolling blackouts. “Getting [natural] gas to [progressive Senators Ed] Markey and [Elizabeth] Warren’s Massachusetts is so difficult,” reports The Wall Street Journal, “that sometimes it comes into Boston Harbor on a tanker from Russia.”

This is a major victory for the millions-strong climate justice movement, which fought for years to stop this pipeline.

Together, we will secure clean air and good jobs building a renewable-energy economy that protects the only planet we have. https://t.co/KjXEyRlrEd

Democrats aren’t the only reason the United States isn’t producing enough natural gas to keep prices at the same low levels they’ve been at for the past decade. There is higher demand as the economy emerges from covid. There is greater demand for natural gas internationally due to a bad year for wind energy in Europe. And President Joe Biden, for his part, has resisted many progressive demands to restrict oil and gas production.

But the main reason there isn’t enough natural gas production is because of successful progressive Democratic efforts to restrict natural gas production in the United States, Europe, and other parts of the world in the name of fighting climate change, as I was one of the first to report last fall. Sanders and Jayapal talk about “market manipulation” and “profiteering” but to the extent there is any of either it’s because of inadequate supplies of natural gas and the pipelines to transport it.

Successful shareholder activism, known in the industry as “ESG” for environmental, social, and governance issues, resulted in less investment in oil and gas production, and more weather-dependent renewables, which result in higher prices everywhere they are deployed at scale. Even ESG champions including Financial Times, Goldman Sachs, and Bloomberg all now acknowledge that it was climate activist shareholder efforts that restricted oil and gas investment.

Such efforts also directly led to increasing carbon emissions. Last year saw a whopping 17 percent increase in coal-fired electricity, which resulted in a six percent increase in greenhouse gas emissions. It was the first annual increase in coal use since 2014. The reason for it was because of the scarcity and higher price of natural gas, coal’s direct replacement, not just in the U.S. but globally, since the US exports a significant quantity of natural gas.

The other reason the U.S. used more coal in 2021 is because progressive Democrats are shutting down nuclear plants. “When a nuclear plant is closed, it’s closed forever,” noted Mark Nelson of Radiant Energy Group, an energy analytics firm, “whereas coal plants can afford to operate at relatively low levels of capacity, like just 30 to 50 percent operation, and thus wait for natural gas prices, and thus demand for coal power, to rise.”

Progressives like Sanders, Jayapal, and AOC claim to care more about poor people, working people, and climate change than either Republicans or moderate Democrats, who they defeat in Democratic primary elections. Why, then, do they advocate policies that make energy expensive and dirty?

A big part of the reason progressives make energy expensive appears to be that they just don’t know very much about energy. The fact that they are demanding that FERC investigate higher prices suggests they want to keep energy prices low. But it could also mean that their letter is just public relations cover so they are not blamed for raising energy prices.

Indeed, it would be naive to think that Sanders and other progressives didn’t realize that blocking pipelines, opposing fracking, and subsidizing renewables would make energy expensive, given that making energy expensive has been the highest goal of their main climate advisor, Bill McKibben, who subscribes to the Malthusian view that there are too many humans and we must restrict energy and development.

If renewables were cheaper than the status quo then the policies they advocate — no permitting of pipelines, restrictions on fracking, and subsidies for renewables — would not be necessary. Besides, mainstream energy experts and journalists today admit that weather-dependent renewables make electricity expensive.

Michael Shellenberger is a Time Magazine “Hero of the Environment,”Green Book Award winner, and the founder and president of Environmental Progress. He is author of just launched book San Fransicko (Harper Collins) and the best-selling book, Apocalypse Never (Harper Collins June 30, 2020). Subscribe To Michael’s substack here

No SWIFT, No Gas: Russia Responds To Western Threats As US Tries To Orchestrate Workaround

Johnny Depp Rolls Out NFT Collection Of Personal Artwork: How You Can Get One | Benzinga

MJF sounds off on rivalry with CM Punk, learning from The Pinnacle, and his place in AEW

Tesla Earnings Preview: What To Watch For When The EV Maker Reports After The Bell Today

ACORD kickstarts 2022 with update to board of directors