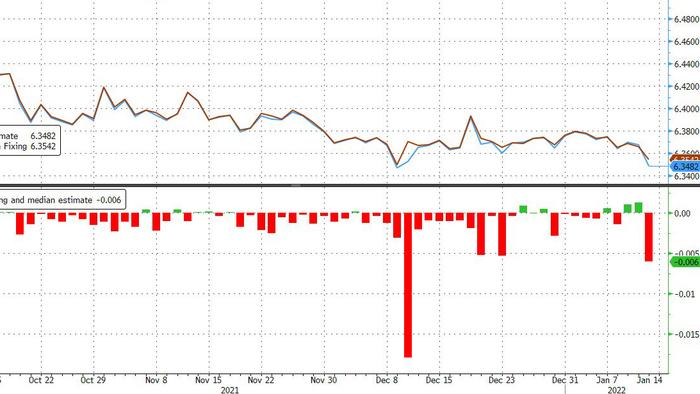 The PBOC has managed to keep the dollar-yuan exchange rate as flat as a pancake. It’s as if Beijing has pegged the yuan to the dollar.  Luckily for Beijing, the dollar is weakening. By keeping the dollar-yuan rate steady, the PBOC is riding the wave of a weak U.S. currency and knocking the yuan down against the currencies of most of China’s trading partners. For policy makers in Beijing who are worried about the record trade-weighted exchange rate, a soft dollar came at the right time.

The dollar’s decline this week in the face of an increasingly hawkish Fed surprised many market observers. But historically, it’s common for the dollar to peak shortly before the first rate hike and decline more decisively once the tightening cycle commenced.

This chart shows the DXY’s average performance 12 months before and after the first rate increase during three previous hiking cycles since the 1990s. If you want to find an example of “buy the rumor and sell the fact,” this might be it.

It’s hard to argue that the yuan is overvalued by too much. You can see that the yuan rally had been supported by China’s gain in market share of global exports. But understandably, Beijing is worried that once its competitors regain their foothold after the pandemic fades, a strong currency may eventually erode China’s competitiveness. In fact, the BIS’s real effective exchange rate is at the highest ever. Against the South Korean won, the yuan is approaching historical highs. With South Korea being a direct competitor in areas such as electronics, it’s small wonder that Beijing wants to lean against further yuan appreciation.

Luckily for China, a weaker dollar is coming to the rescue. And that gives Beijing some breathing room.

Will Bitcoin Be The Key For 30% Gains, Or Are Altcoins The Ideal Choice Amidst The FOMC’s Meet?

Boston Man Kicked Off Heart Transplant List For Not Being Vaccinated