It was January 6th of last year that Gold prices really started to tumble. Before that, there was hope that buyers would be able to continue the bullish trend that was so pronounced in the first eight months of 2020 trade, but after the bearish engulfing candlestick showed up a little over a year ago, the high was set and Gold prices wouldn’t encroach upon the 1950 level again for the rest of the year.

Coming into 2022 trade, there was a bit of optimism, with perhaps an extra sense of caution given just how badly last year had turned out for gold bulls. After the December FOMC rate decision, gold prices built-in support around the 1760 level and that led to a trickle-higher with prices breaking out on the final day of 2021 trade to run up to a key zone of confluent resistance around the 1830 handle.

But that resistance test has so far brought a decisively bearish response as markets begin their first trading day of 2022. The prices of 1829 and 1832 are both Fibonacci retracements, the latter of which is the 38.2% marker of the 2020-2021 major move.

This same confluent zone caught highs in Gold during July, August and September of last year.

Taking a step back on the chart and there’s bearish potential here for 2022 trade, and this seems to mesh with the fundamental environment in which the Fed is expected to begin lifting rates at some point this year.

And to confirm the importance of that theme, mesh the top in gold in August of 2020 with the rise in Treasury yields; and as signs have mounted that the Fed may be pushing rates higher Gold prices have continued to plummet.

Last year saw three different tests of the 1680 zone on the chart, which I’m extending up to 1700 to create a support area that’s served as a recent floor. That horizontal zone came into play in March, April and August, with an assist in August from a longer-term Fibonacci retracement from which a 38.2 plots right at 1682.

Of note, those support bounces appear to be carrying a diminishing marginal impact, which has allowed for a bearish trendline to form. The bearish trendline combined with horizontal support makes for a descending triangle formation, which will often be approached with the aim of bearish breakdowns.

Given the longer-term nature of the below chart, timing remains of issue, but the accompaniment of a shorter-term bear flag keeps the look on the short side of the market; and this morning’s resistance rejection at a key spot on the chart illustrates that potential. 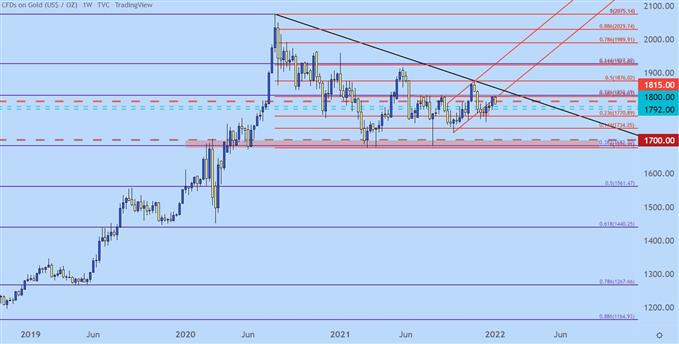