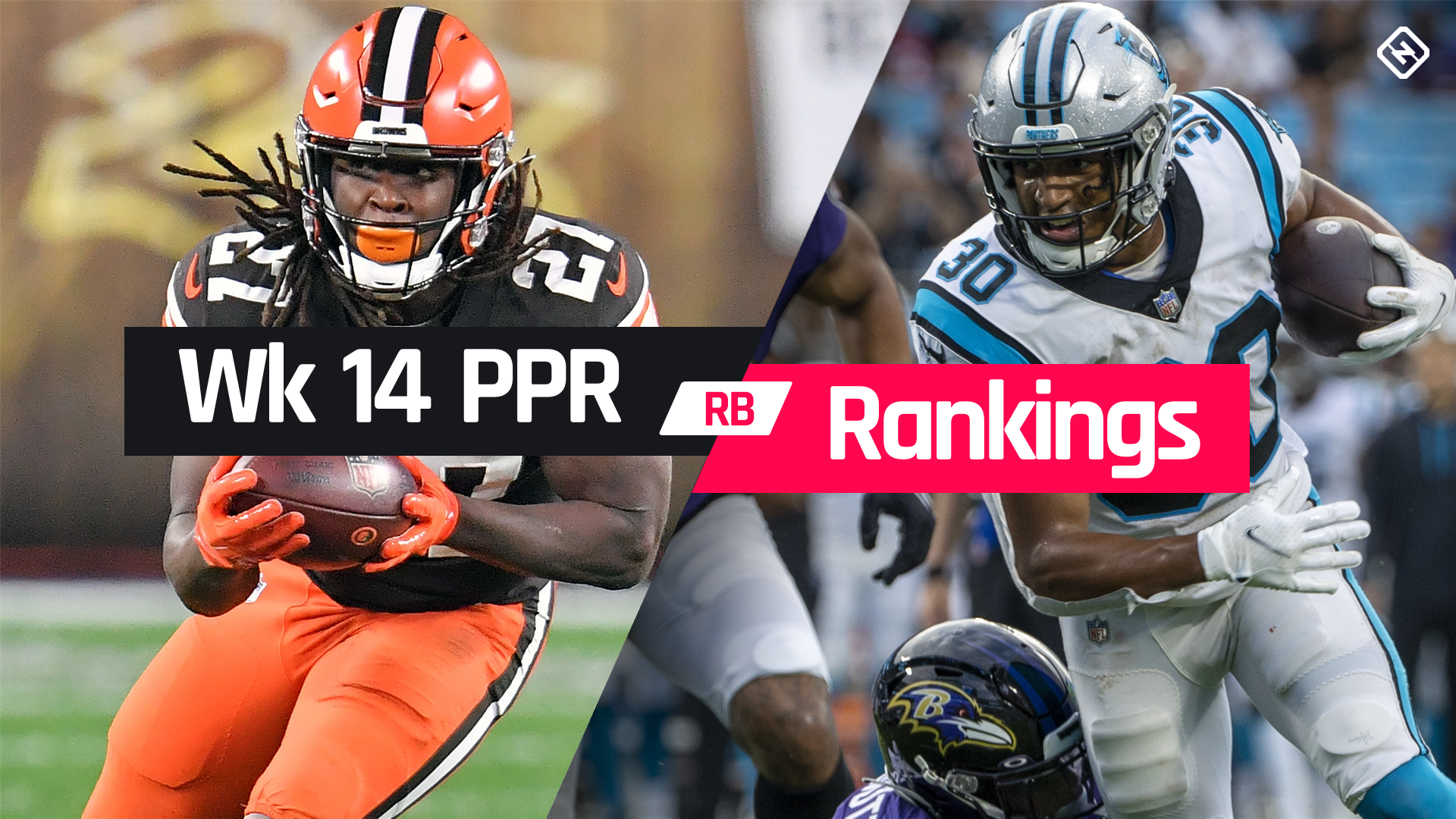 Between injuries, byes, and “awkward” matchups, our Week 14 fantasy RB PPR rankings were not easy to put together — and you can bet they’ll see plenty of updates throughout the week ahead of your final start ’em, sit ’em decisions.

First, let’s start with the byes. They’re actually not too bad, as the Eagles’, Patriots’, and Dolphins’ RB situations can often be frustrating, but Jonathan Taylor being out during the last week of the fantasy regular season is a real killer. The biggest plus to those byes is that two of the best run defenses are off (Colts, Patriots).

Obviously, we’ll deal with injuries as they come, but in the meantime, we’ll have to figure out how to navigate the matchups. Several uninspiring committee backfields have RB-friendly opponents. The Texans (vs. Seahawks), Seahawks (@ Texans), and Titans (vs. Jaguars) all feature at least two backs, and at least for the Texans (David Johnson and Rex Burkhead) and Titans (Dontrell Hilliard and D’Onta Foreman), you can play both backs. Usage trends aren’t quite as obvious for the Seahawks, and after a Week 13 in which Alex Collins (abdomen) was out and Adrian Peterson handled most goal-line duties…we have no idea what to think. We can’t even point to one guy who gets a bump in PPR leagues, so for now, that looks like a stayaway.

The Broncos (vs. Lions) and Saints (@ Jets) are much better committee situations if Melvin Gordon (hip) and Alvin Kamara (knee) play. You can start Gordon, Javonte Williams, Kamara, and Mark Ingram given the matchups. If Gordon and Kamara are once again out, then Williams and Ingram will be borderline RB1s.

On the flip side, Tevin Coleman (vs. Saints) and Matt Breida and Devin Singletary (@ Buccaneers) are in the worst spots among borderline backs, and it will be tough to know what to do with Darrell Henderson (@ Cardinals) and James Conner and Chase Edmonds (vs. Rams). It’s likely you’ll be starting all three in PPR leagues, as Edmonds should immediately go back to being Arizona’s top target while Conner always has high TD potential, but after Henderson (quad) burned fantasy owners last week, he might be on a few hit lists.

One situation that’s impossible to evaluate right now is in Carolina. Chuba Hubbard (vs. Falcons) was solid, if unspectacular, during Christian McCaffrey’s absence earlier this year, averaging 84.4 total yards and 2.6 receptions per game. Ameer Abdullah’s playing time has been trending upward, and given his superior receiving skills, it’s possible he’s the more valuable PPR back in this favorable matchup. For now, we’re sticking with Hubbard higher in the rankings, as he seems more likely to score and get touches, but we’ll have to watch how Carolina divvies up playing time.

There aren’t many notable “pass-catching” backs who are sneaking up the PPR rankings, J.D. McKissic (vs. Cowboys) is always in play as a flex when he’s active, and Kareem Hunt (vs. Ravens) remains a solid starter, but unless you’re talking about the Houston or Tennessee backs we mentioned earlier, this just isn’t the week to bet on a running back to get it done solely based on receptions.

Fantasy RB PPR Rankings Week 14: Who to start at running back