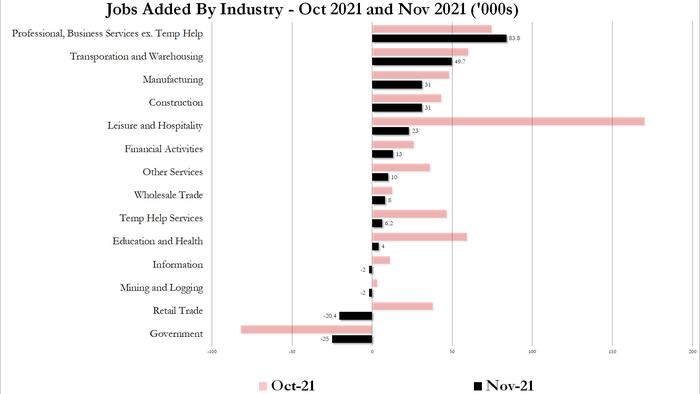 
As discussed extensively earlier, there were some pretty striking disconnects in today’s jobs report: while the headline payrolls number was a huge miss and printed the lowest monthly gain of 2021, the unemployment rate tumbled, the labor participation rate jumped and the number of employed workers actually surged by 1.1 million according to Household survey. In short, the establishment survey suggested employment rose just 0.1% in November, while the household survey suggests employment surged by 0.7%. As Danny Dayan, chief investment officer at Dwd Partners, put it best, this was “one of the weirdest reports I have ever seen.”

TD Ameritrade chief market strategist JJ Kinahan added some more details to the confusion: “Obviously, the top-line numbers in the November jobs report disappoint, which is a strange contradiction to the unemployment rate having come down so significantly.”

Then there was Dennis DeBusschere of 22V Research who was laconic: “WOW … OK. This number was all over the place. Significant miss on the headline number. But that’s not the story. The u-rate declined significantly with a slight increase in participation. That is because the household employment number was +1.1 million, which is a huge number. Now, household is a volatile number, but it’s hard not to assume this will ultimately be viewed as a somewhat positive report for the labor market — unless we are totally missing something on the household reading. So we would fade the move lower in short rates.”

Of course, as we also showed earlier, a big reason for the confusion was the gaping seasonal adjustment factor used by the BLS to “normalize” the November number. Had it used a more in-line adjustment, payrolls would have increased by some 300K more, or above 500K, and in line with expectations.

In other words, one month from today we expect the BLS to revise today’s 210K print some 200-300K higher.

And while we wait, here is our traditional breakdown of the components of the establishment survey, looking at which jobs increased and which dropped, with the knowledge that all of these will change dramatically next month.

Here too, some peculiarities emerge. As Jefferies economist Thomas Simons notes, “retail trade payrolls fell 20K (vs +38K in October), while leisure & hospitality payrolls rose only 23K after rising 170K in October and averaging well over 100K for the last few months. We had thought there would be a pickup in both of these, but November was curiously soft on this front. It is not clear if this is a seasonal issue, or some sort of shift in terms of the timing of holiday help, but overall the payroll data does not match up with the alternative indicators of labor market activity that we track.”

Meanwhile, TDA’s Kinahan further notes that “this report contains a few head-scratchers: for example, leisure and hospitality are up only slightly, and retail being down is odd for this time of year. But we did see strong numbers in important areas — warehousing, construction, and manufacturing, to name a few.”

With that in mind, here is the full breakdown:

While the overall picture was mixed, even the one job sector which has kept on giving since Lehman, namely employees in food services and drinking places (or waiters and bartenders) added just 11K jobs in November.

Well, at least they are still hiring.

Which brings us to a curious point: as Bloomberg economist Carl Ricadonna observes, “the jobs deficit relative to February 2020, which currently stands at 3.9 million jobs, is entirely comprised of workers who lack a college degree. College-educated workers are now about 2% above their February 2020 employment levels and continue to see the strongest job growth, with high-school-educated workers still about 5% below pre-pandemic levels. Employment among workers with less than a high-school diploma actually declined over the last three months.”

The good news: all those who spent over $100,000 to major in feminist studies, can take comfort that they will always have a job waiting for them in America’s food service industry.