The Australian Dollar, like all free-floating currencies, is subject to many variables to establish a value relative to another currency, commodity or asset. It has been argued that the 2 most important drivers of this valuation are flow and perception.

Foreign exchange transactions that require a payment generate flow. The conditions that a currency operates in create a perception of there are occasions when a perception can generate a flow and vice versa.

It is difficult to assess flow or perception with any reliability. The publicly available data is untimely and patchy. Reading someone else’s mind is hard enough, let alone an entire market of undefined participants.

However, AUD/USD has displayed some characteristics that would make reasonable sense to observe, namely commodities, interest rates and the relative value of the other currencies that it is being exchanged for.

The Importance of Iron Ore

Iron ore is Australia’s largest export, and many other commodities fill out the top 10. When iron ore prices move significantly, it changes the physical amount of Australian Dollars that need to be bought. The price of the commodity moving also creates a perception of value for AUD.

The price of iron ore sky-rocketed to over US$ 200 a tonne earlier this year and has since fallen back to earth with a thud. However, the price may not have much more downside. The main buyer of iron ore is China and they have made it abundantly clear that they want to move away from relying on Australia to meet their needs.

China has funded several projects around the world to address this issue. The problem is that iron ore reserves are not in as much abundance in a single location. The huge scale of infrastructure required to move large volumes take time and significant investment to build.

Australian miners generally have a cost per tonne of less than US$ 20 per tonne. New marginal players in iron ore have a wide rage of estimated costs, but many in the industry estimate that it is somewhere between US$ 60 and 80 a tonne.

So, it is not necessarily in China’s interest to have these marginal players go out the back door. The price recently touched a low of US$ 82.50 and has since recovered to over US$ 95. The worst news for AUD/USD from iron ore prices could be behind us. If not, the impact may not be as negative as it has been.

The chart below shows the decline in iron ore against AUD/USD movements.

A problem for assessing short term-interest rates for AUD/USD has been the RBA using yield curve control (YCC), which has distorted rates out to the 3-year bond. The RBA has since abandoned the policy.

The 10-year yield differentials of AU-US government bonds have also played a role, but this spread appears to be less significant now – as illustrated in chart below.

The Strength of the US Dollar

The US Dollar Index (DXY) seems to be having more influence over AUD/USD. The DXY Index is composed of the Greenback against EUR, JPY, GBP, CAD, SEK and CHF. The chart below shows an inverted DXY to match movements with AUD/USD.

The US Dollar has been rallying across the board of late as the Federal Reserve has been gearing up to tighten monetary policy faster than the market had previously anticipated.

The most recent comments from RBA Governor Philip Lowe sees Australian rates more likely to climb after the US, at this stage.

Looking at the chart below, iron prices and 10-year yield differentials appears like they may have played a role in AUD/USD direction previously. However, it could be that the US Dollar is now more significant and the Fed hiking rates earlier than Australia might be driving this.

The Australian Dollar broke below 0.71062 this week and made a new low for the year as momentum appears to be building. 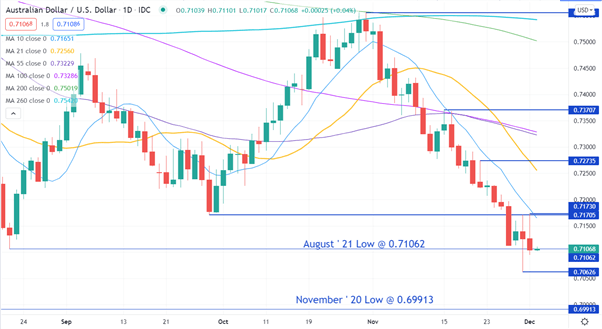