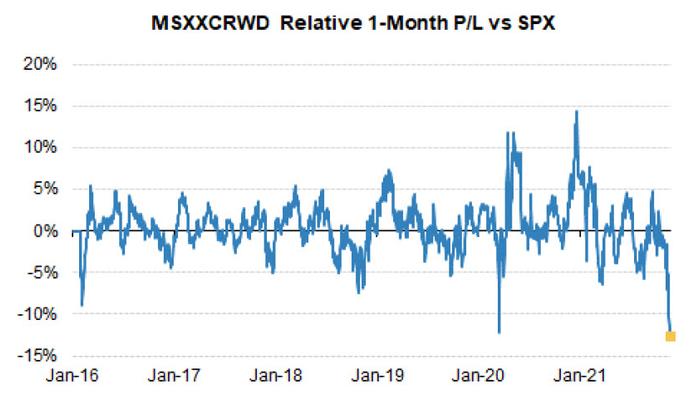 
It was almost exactly a year ago when just weeks before the first of many epic short squeezes observed in a handful of meme stocks such as GME, AMC and so on, which would eventually consume the retail public with a daytrading, short-squeezing frenzy, that we reminded our readers that the single best alpha-generating strategy in this irreparably broken market is to go long the most shorted stocks (as this tweet from Nov 30, 2020 clearly states)…

Once again, the best strategy for a broken, incoherent market is to go long the most shorted stocks: double digit alpha 6 of the past 7 yearshttps://t.co/GlV2aUYXlG pic.twitter.com/kOlXzxiCvH

… a strategy that had worked like clockwork virtually every year in the past decade (with just one exception), and which we summarized as follows: “Do the opposite of Wall Street consensus and retire in a few years.”

Do the opposite of Wall Street consensus and retire in a few years pic.twitter.com/ouQ8Jc9NwI

Of course, while most of the US daytrading class is now in a furore over the “discovery” that most shorted stocks tend to outperform – to put it mildly – when a bunch of Gen-Z apes rams illiquid, heavily shorted names up the collective behind of hedge funds which “legally” collude during idea dinners to put on a basket of shorts, hence why stocks like GME can end up with a synthetic short that is higher than the entire float, none of this should be news to regular readers, as the theme of going long the most shorted names is one we first presented and discussed as far back as 2013:

We then reiterated this strategy in 2014…

It took banks about 6 years after our first post on this matter to admit we were right and that going long “the most shorteds” is not only the most profitable strategy but also the most successful one in the past decade; in Aug 2019 Bank of America showed that “buying the 10 most underweight stocks and selling the 10 most overweight stocks by active funds has generated alpha in the past years with the exception of 2017″...

… as we laid out in Going Against The Wall Street Crowd Has Been The Most Profitable Strategy.

What is the point of all this?

Well, the point is that almost ten years after we first pointed out this phenomenal trade which almost literally prints money with the same regularity as the Fed, only this one actually requires some effort, nobody has learned a thing.

As we first observed last week in “Most Popular Hedge Fund Stocks Suffer Record Stretch Of Underperformance” the hedge fund hotel that is Goldman’s hedge fund VIP basket of 50 most widely held HF stocks, has suffered the biggest 6 month drop on record at a time when nothing could go right for hedge funds.

Then over the weekend, we observed that even before last week’s historic Black Red Friday collapse. which saw the biggest post-Thanksgiving drop on record, hedge funds had a terrible week because according to Goldman prime, the GS Equity Fundamental L/S Performance Estimate fell -1.57% between 11/19 and 11/25, driven by alpha of -1.12% which was “the worst alpha drawdown in nearly six months” and beta of -0.45% (from market exposure and market sensitivity combined).

And then, the cherry on top was Friday’s meltup in a handful of pharma stocks like Moderna and Pfizer, which exploded higher as everything else was crashing, steamrolling hedge funds even more for one simple reason: Moderna was the third largest short in the hedge fund world according to Goldman.

Which brings us to the punchline: according to Morgan Stanley’s Quantitative Derivatives Strategy team, “The MS Crowded Long basket MSXXCRWD is down 13% vs. the S&P 500 over the last month — the worst rolling one-month relative performance on record (just edging out March 2020).“

As QDS puts it “Think about that: WORSE than March 2020…. and again, this doesn’t even embed Friday’s move.”

There are several ways to interpret this stunning observation – none of them flattering for a hedge fund community which long ago forgot how to actually hedge – but perhaps the simple and most robust explanation is to keep doing what we said back in 2013 remains the most profitable strategy –  buy the most shorted names and go short the most popular names, a strategy which will keep on giving as long as the market remains as broken as it is today.

And just to help readers off on their mission to profit from a terminally broken market – because after all, everyone else does it – here again is a list of the 50 most popular hedge funds longs…

… and the 50 biggest hedge fund shorts.

And as an added bonus stepping aside from the hedge fund universe, here are the 50 most shorted names, i.e., those companies with a $1BN+ market cap that have the highest short interest outstanding as a percentage of market cap. Going long an equal-weighted basket of these names has historically generated returns of over 20% every single year.

The full reports from both Morgan Stanley and Goldman are available to pro subscribers in the usual place.