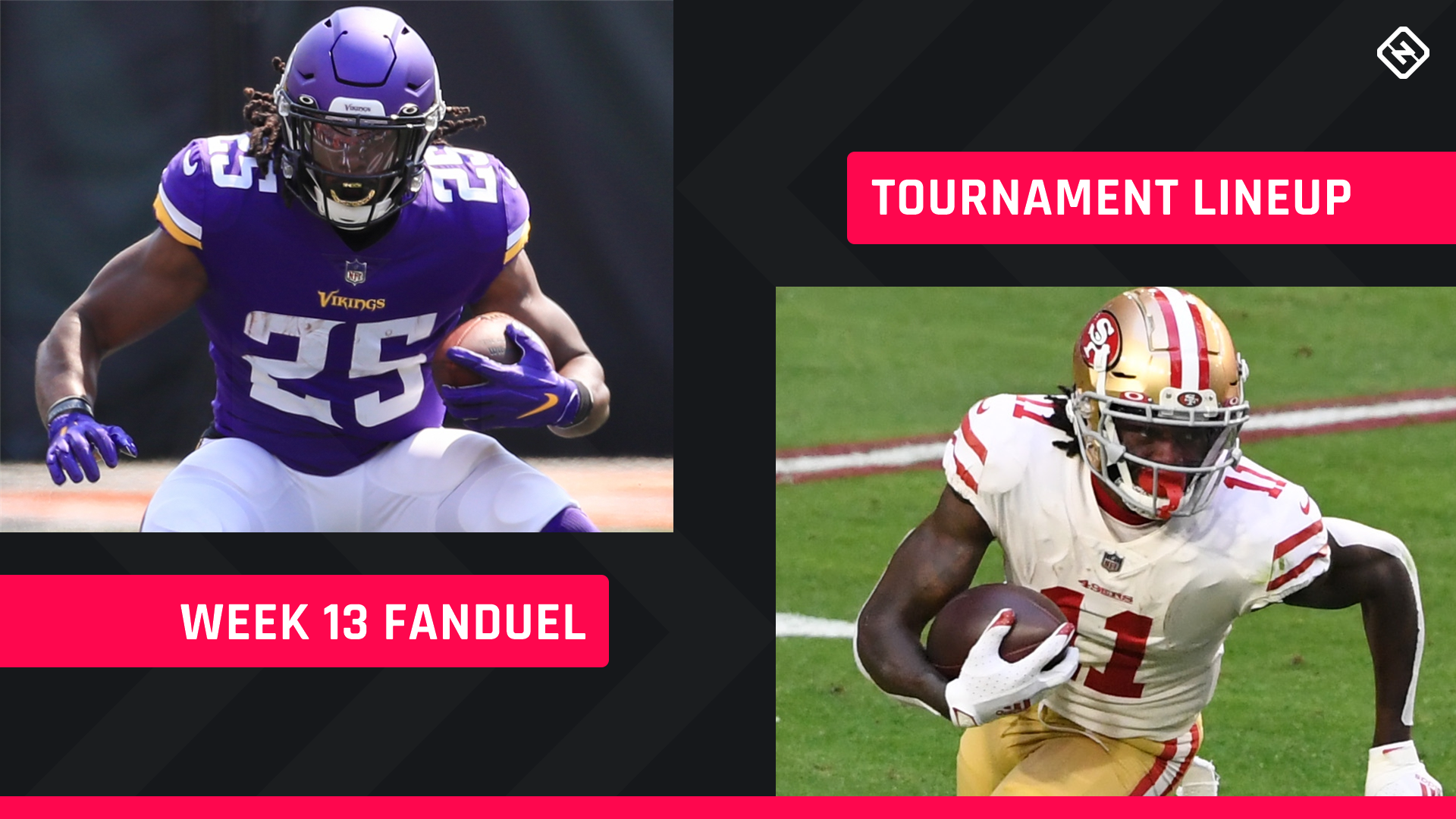 As the season winds down and injuries mount, it’s time for us to reach deep into our DFS tanks for the juice to get us through the final third of the 2021 campaign. While we’re not going all-in on the “next men up” in these injury situations, our Week 13 FanDuel tournament lineup takes advantage of a couple of guys who figure to receive elevated roles. As always, we’re mixing in our fair share of boom-or-bust options fit for GPP tournaments.

QB Tom Brady, Buccaneers @ Falcons ($8,100). Even though Brady has had a couple of ho-hum performances over the past few weeks, we don’t need a cute or clever reason to include him in this lineup. Brady has scored at least 27.0 FanDuel points five times this season, and the Falcons are one of the worst defenses in the league.

RB Alexander Mattison, Vikings @ Lions ($8,700). Mattison will be among the chalkiest plays on Sunday, but we’ll accept that in this case. In two games with at least 20 rush attempts, Mattison averaged 21.5 FD points. Slated for the lead role in the wake of Dalvin Cook’s shoulder injury, Mattison is a strong bet to eclipse the 20-point barrier once again.

RB Antonio Gibson, Washington @ Raiders ($6,200). Gibson handled a career-high 36 touches in the Football Team’s victory over the Seahawks on Monday night. It’s his third game in a row drawing a healthy-to-hefty workload, something that should continue this week on the road in Las Vegas. Gibson ceded a pair of scores to J.D. McKissic last week, but with so much volume, it’s fair to expect the touchdowns to start flowing again.

WR Diontae Johnson, Steelers vs. Ravens ($7,200). Johnson continues to draw massive target numbers like clockwork. His 14 last week marked a season high, and he’s received 13-plus looks in five of his past six games. We don’t make a habit of picking on the Ravens, but when the choice is between a target hog and a tough defense, we’re typically going to side with the former.

WR Darnell Mooney, Bears vs. Cardinals ($6,700). Mooney has taken over as the Bears’ primary receiver, a trend that was kicked into motion even before Allen Robinson missed a couple of contests due to a hamstring injury. Mooney has totaled 30 targets over the past three games and scored at least 15.0 FD points in each contest over that span. The Bears have also started to utilize him on designed receiver runs, providing another opportunity for him to inflict damage on the opposition.

WR Brandon Aiyuk, 49ers @ Seahawks ($7,000). Aiyuk will have an opportunity to carve out a larger role within the offense with Deebo Samuel sidelined for at least Week 13 because of a groin injury. Aiyuk has gradually put a rough early-season stretch behind him, scoring double-digit FD points in three of his past four. While he’s not the same wrecking ball of a runner as Samuel, Aiyuk’s versatility will allow him to do damage on similar types of quick-hitting passes and designed receiver runs if Kyle Shanahan decides to dial them up.

TE Jared Cook, Chargers @ Bengals ($5,100). The tight end position is in rough shape right now, and the opportunity cost of rostering a “reliable” one this week is prohibitive. Cook hasn’t been anything special this season, but he’s still a respectable red-zone threat and the Bengals have been generous to tight ends. We’re taking the frugal approach this week, opting for the upside that an inexpensive Cook provides in this spot.

FLEX Odell Beckham Jr., Rams vs. Jaguars ($6,000). After struggling — understandably — to get Beckham off and running in his first game with the Rams, Sean McVay and Matthew Stafford had more success coming out of the bye. Beckham turned 10 targets into 16.6 FD points, and more reps should allow for more worthwhile performances going forward. The Rams have dropped three straight and will be hungry for a win against the lowly Jaguars.

DEF Rams vs. Jaguars ($4,900). Speaking of those lowly Jags, they present a prime opportunity for a talented and severely underperforming Rams defense to get on a roll. The bye should have provided them an opportunity to clean up some of the issues that have led to them being gashed in recent weeks. Not to mention, Jalen Ramsey will be gunning for a pick-six. (Buying the Ramsey revenge narrative is optional.)