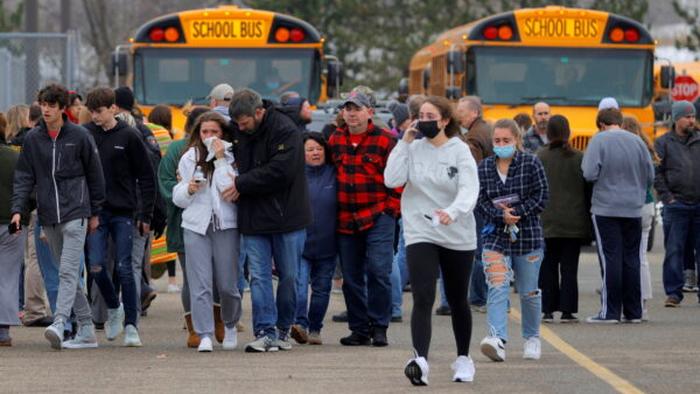 Authorities on Tuesday said that at least three people were shot and more injured at a Michigan high school, and the suspect is in custody.

The Oakland County Sheriff’s Office said in a news release that a suspect was taken into custody. The shooting occurred at Oxford High School in Oxford, Michigan.

The identity of the suspect and a motive haven’t been disclosed. The suspected shooter was identified as a 15-year-old male who officials believe acted alone, according to the news release.

Oxford High School shooting: Ambulances and school buses are heading towards the Oxford Meijer, where students were evacuated after a shooting at Oxford High this afternoon. Officials say three were killed and six others injured #Oxford #Michigan #OxfordHighSchool pic.twitter.com/BdALwJGrBv

“There was no resistance during the arrest and the suspect has asked for a lawyer and has not made any statements as to a motive,” the release continued.

Officers responded at around 12:55 p.m. to a flood of 911 calls about an active shooter at the school, Oakland County Undersheriff Mike McCabe said during a news conference. Authorities arrested the suspect at the school and recovered a semi-automatic handgun and several clips.

“Deputies confronted him, he had the weapon on him, they took him into custody,” McCabe said.

The three who were killed are believed to be students, while six others were shot, including a teacher, said the release. Their identities were not revealed.

School district officials told parents in a message earlier Tuesday that there “was an active shooter at Oxford High School.”

“Oakland County Sheriff’s Department has secured the scene. Oxford High School students and staff are systematically being evacuated to the Meijer Garden Center and may be picked up there. Any students with their own transportation have been allowed to leave,” the district said, WDIV-TV reported. All other district schools are in lockdown for safety purposes and are in no danger.

The disctrict added: “Students at middle and elementary schools may be picked up by their parents at any time. Busing transportation will be delayed at Oxford Middle School and elementary schools until the needs of the high school students have been met. We will continue to share information with you as we can.”

Several schools in the area were also placed on lockdown due to the incident.

“In this moment of tragedy, there are heroes showing who they are,” Rep. Elissa Slotkin (D-Mich.) wrote on Twitter in response to the incident. “Thank you to everyone who is stepping up to help in our community’s time of need.”

Oxford is located about 50 miles north of Detroit.

The Associated Press contributed to this report.