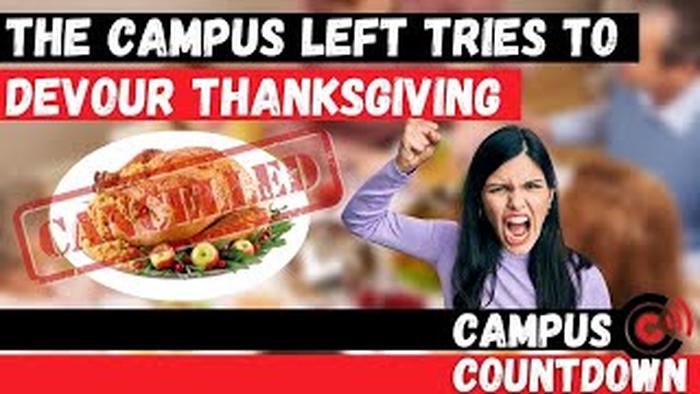 
Authored by Ophelie Jacobson via CampusReform.org,

On this week’s special edition of the Campus Countdown, Campus Reform Reporter Ophelie Jacobson breaks down some of the Left’s latest attempts at cancelling Thanksgiving.

Back in 2018, the McQuade Library at Merrimack College in North Andover, Massachusetts, referred to Thanksgiving as a “#NationalDayOfMourning.”

In 2020, a student at the University of Virginia encouraged readers to stand up to racist family members at Thanksgiving dinner in an opinion column in the student newspaper.

And most recently, the student paper editorial board this month at the University of Pittsburgh is asking students to “redefine” Thanksgiving.

Jacobson says these examples prove why “it is so important that we work to protect ‘the’ American holiday.”

“This is a part of our history and a part of our culture. We should be doing everything in our power to make sure the next generation of Americans continues to celebrate Thanksgiving and learn about the true history of what happened,” Jacobson says.

“And that starts by paying attention to the rhetoric surrounding this holiday on campus.”

Watch the episode above for full coverage on all of these stories.