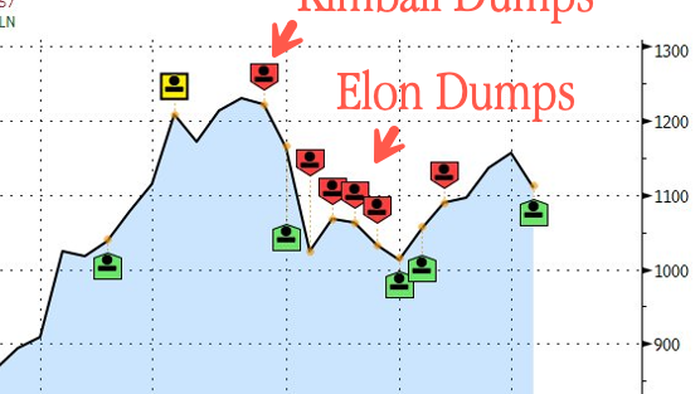 
Bloomberg reports that Tesla Inc. Chief Executive Elon Musk has reached the halfway point of disposing of 10% of his stake in the electric-car company.

According to new US securities filings, Musk dumped another 934,091 shares for $1.05 billion. The stock sale covered taxes related to Musk exercising an additional 2.15 million stock options.

Since Musk tweeted on Nov. 6 that we would sell 10% of his stock if users of the social-media platform approved. He’s liquidated 9.2 million shares worth about $9.9 billion – now at the halfway point of liquidating his 10% stake.

We noted earlier this month the Twitter poll gave Musk the cover to dump billions of dollars of stock, while blaming the Democrats’ proposed unrealized capital gains tax as the catalyst behind the sale.

Incidentally, such an idiotic, socialist tax will never pass through Congress but is the perfect strawman for Musk to become far more liquid to the tune of billions, because as Scott Galloway said, echoing our own comments Musk will use “Twitter results as cloud cover to monetize $TSLA at prices he knows aren’t sustainable without outright telling the market he’s lost faith in its valuation.”

For those wondering if Musk is done selling; He’s not. To reach the 10% limit, 17 million shares or about 1.7% of the company’s outstanding stock would need to be liquidated. If his exercisable options are factored in, he might have even more to sell.

Before the Twitter poll, Elon’s brother, Kimball Musk, front ran his brother by dumping stock. It seems like selling stock is a whole family affair.

Famous short-seller Michael Burry of The Big Short jabbed Musk earlier this month and said that the Tesla CEO might need to sell his shares because he had 88 million of them pledged as loan collateral.

All we know at this moment is Musk is not done selling stock. He will have to develop new tricks and gimmicks to keep the Tesla cult pleased while the stock underperforms.