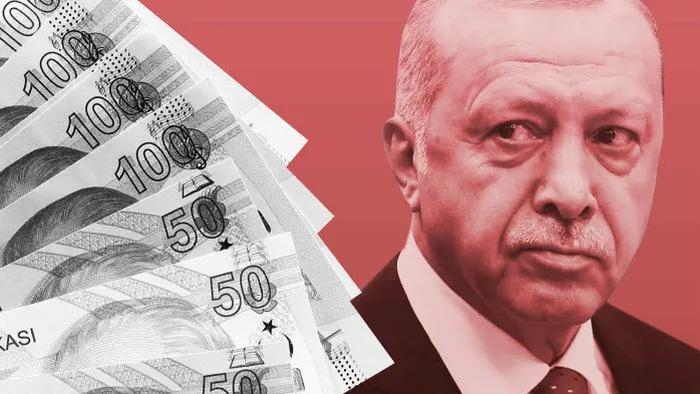 
A few days ago we joked that with the lira collapsing at a record rate that would make Rudy von Havenstein and Gideon Gono blush, it was Turkish president Recep Erdogan’s secret grand plan to unleash hyperinflation in Turkey, and to wipe the country’s lira-denominated debt clean (foreign-denominated debt is a different matter).

Erdogan Ally Bahceli: Central Bank Independence Must be Debated. Says “Turkey should be free of interest rate burden…Tight monetary policy would hurt economy” more than the impact of lower rates or lira weakness

Unfortunately, it turns out that this actually was not a joke, and as Turkey’s currency collapses – and will continue to collapse until either i) Erdogan is gone or ii) he reverses his uniquely insane brand of economic orthodoxy known as Erdoganomics according to which lower yields rates in lower inflation – Turkey’s prices are now literally hyperinflating with wine up 15% in a day, chicken by 10%, gasoline surging…

… and virtually every other good and service up in the high single or double digits.

And not surprisingly, as a producer from Britain’s Sky found on the ground today, Istanbul’s sky is as gloomy as the mood in the households and on the streets of Turkey.

As Sky reports, prices had already hiked during the pandemic: over the past 18 months, while packaged goods shrunk and prices soared, there was not a single empty shelf. Compared to the western world, Turks prided themselves with not having to fight for toilet paper or masks.

But today the recent change in interest rates policy and the unorthodox economic strategy is impacting the exchange rate sinking the national currency to an all time low. Turks may not earn their wages in foreign currency but their currency is melting like ice on a summer day and prices increase by the week. And it feels like it is nearly every day.

As Sky’s Guldenay Sonumut reveals, “a bottle of wine I bought the day before had increased by 15%. It is hard to keep up.”

Ibrahim Koksal is a tiny shop owner in Yeniköy. He has a tiny “bodega” store that sells as many items as possible from cigarettes to batteries as well as fast food he cooks on the go. Running from his food stall to his cashiers’ desk all with a smile.

He has been a small shop owner since 1993 and admits the price increases have hit him, his household and his business as well as his customers.

“I cannot reflect the 10% increase from this morning on the chicken and cheese I use in my sandwiches.

“Because the business is so slow, it would scare off my last customers,” he tells me very honestly. “I have to create some turnover but I am losing from my profit”.

Paradoxically, even though it means his financial ruin, Ibrahim supports Erdogan’s financial policies. When asked about what he thinks the reason for the current economic situation is, Ibrahim says: “Our neighbors are jealous. This is what I think”. He repeats President’s Erdoğan’s rhetoric of waging an independence war. It will demand time and sacrifice, a sacrifice he is prepared to make.

Actually it has nothing to do with Turkey’s jealous neighbors, and everything with Erdogan’s systematic plunder of his country which according to some is in the billions and which has left the country facing an all out financial, economic and monetary collapse coupled with bank runs and – now – hyperinflation.

Still, when one is brainwashed, nothing matters: Ibrahim does not believe in an early election or the ability of the opposition parties to handle the task. Ibrahim says Erdoğan is working for the country against everyone – and he stands by him.

Sonumut then met 41-year old Özgür who owns a jewellery shop on the main Street in Yeniköy. The Sky producer was the second person who entered the shop in an hour. For Özgür, he is witnessing the slowest business since during the pandemic.

“I have made half of what I usually earn this last month. The price fluctuation between yesterday and today is over 10%.

“This is untenable. In my professional life I have never seen anything like the last 10 days we went through. Our customers do not know what to do. They are waiting to see what will happen.”

Özgür is slightly more rational than his bodega-running buddy: he says there is a definite need for stability, and a need to stop the obstinate stand with the interest rates. Does he think an election would be the solution: “I think we may see an election this summer. I think if the opposition gets elected there might be some easing of the tensions. But we need to come back to stability.”

It is a sentiment shared by everyone in supermarkets, shops, pharmacies – the conversations are one of worry of the unknown.

Many feel free to voice their worry like Özgür or Ibrahim, but the everyday housewife does not want to answer any questions, “Don’t you see what is happening?” they all say.

Indeed, it’s pretty clear what is happening – the economic death of a country because its authoritarian ruler will drag the entire country down with him.

As Sky concludes, in a matter of weeks, “shopping carts have suffered from the price hikes.” People feel they are paying twice the price and get half of what they used to buy. “They want to go back to how it was.”

According to Erdoğan, a positive impact will be felt in a few months but there is a very tough winter ahead.