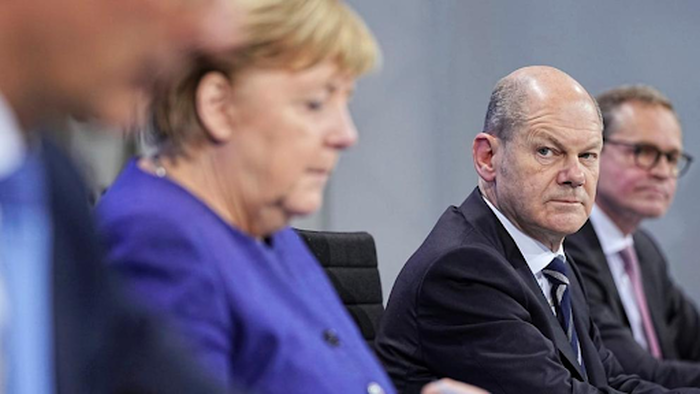 
Germany’s new “traffic light” coalition – which we discussed earlier – is not even a day old and yet it appears its new leader, current Merkel finance minister Olaf Scholz, has already made a decisive break with the previous boss over what Scholz has described as one of Germany’s most important domestic policy issues: the handling of the coronavirus pandemic particularly the “4th wave” of the virus that has sparked panic, leading to demonstrations in Germany and across the EU.

According to Bild, which is a tabloid so take it with a mountain of salt, Germany’s incoming government has turned down a request by Merkel to impose a two-week “lockdown for all” immediately following her departure.

#Germany: Merkel requested a 2-week lockdown for all but it was turned down by the new coalition according to Bild #oott pic.twitter.com/9v0wP27VZv

The plea was rejected by representatives from the Social Democrats, Greens and fiscally conservative NFP who met with Merkel Tuesday evening in the chancellery, presumably after giving the Chancellor the signal that negotiations were just about to wrap up after more than 5 weeks of talks.

Most Germans have long presumed that Scholz would likely emerge from the talks as the new chancellor, after emerging from federal elections in September in what some described as “poll position” to lead the next government.

It now appears as if Germany finally has a leader who puts personal liberties and right over the demands of the pharma lobby and whatever The ScienceTM is paid to declare on any given day.

As we reported earlier on Wednesday, Scholz has managed to bridge the ideological divide between the Greens and the conservative FDP to create Germany’s most inclusive government in recent memory. With an unprecedented three-party coalition, Scholz has managed to bring about the end of nearly two decades of center-right rule by shifting Germany’s political framework all the way to the…center-left.

Although at this point, it’s difficult to say much about the perspective of Scholz’ new government, which already appears to be taking on a more centrist, utilitarian approach.

As we explained earlier, Scholz will take over as chancellor, while the FDP leader Christian Lindner will take over Scholz’s old job as finance minister. The greens expect to be “rewarded” with two major ministries for their own leaders, Robert Habeck and Annalena Baerbock: A new economy and climate ministry for the former, and the prestigious foreign ministry for the latter.

Scholz said Wednesday that Germany would consider a vaccination mandate for “some groups”, but he didn’t elaborate much on what he meant by that.

Demonstrations against new virus restrictions were observed in Austria, Croatia, Italy, Northern Ireland, the UK, France, Germany, and the Netherlands over the weekend.