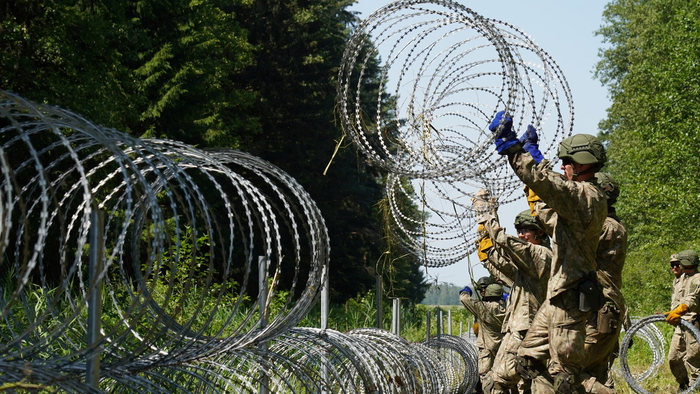 
The Baltic European Union country of Estonia has ordered previously unannounced military exercises along its border with Russia, at a moment Latvia, Lithuania, and Poland to its south are locked in a standoff with Belarus over the migrant crisis.

The drills are being interpreted in part as an act of solidarity with Poland and meant to send a message to Belarus and its main geopolitical backer Russia. In particular military reservists are being called up to fortify the border, just like is happening with Estonia’s EU allies, as Reuters reports, “The Estonian government summoned 1,700 reserve soldiers on Wednesday for an unannounced exercise which will include installing a razor wire barrier along 40 km of its border with Russia, as the migration crisis in nearby Belarus intensifies.”

For the past week Poland, Lithuania, and Latvia have had states of emergencies in place at their borders with Belarus, allowing additional forces and reserve units to be called up, as the situation shows no signs of abating anytime soon.

Belarus and by extension Russia have been accused of orchestrating a crisis which has seen thousands of mostly Middle Eastern migrants camped out at key border crossings near northeast Poland, which has included scenes of throngs of migrants trying to forcibly break through the border fence. This has in recent days led to Polish police deployment of riot control measures from the other side of the crossing.

Commenting on the snap Estonian drills, the country’s chief over national Police and Border Guard units Elmar Vaher said, “What is happening in Poland, Lithuania and Latvia also requires the strengthening of the border infrastructure in Estonia.”

But given Estonia does not share a border with Belarus, it simply appears a political move to put continued pressure on Russia, at a moment Belarus has come under fresh EU sanctions over the crisis. Russian airlines (Aeroflot in particular) have also been targeted amid accusations they’ve helped Belarusian carriers in transporting migrants from the Middle East for the sole purpose of sending them to the Polish border for the standoff.

Meanwhile, on the Poland-Belarus border…

Migrants have been placed in a warehouse along the Belarus-Poland border, a much needed bit of relief for scores of families who have spent weeks camped in freezing and fetid fields with little more than the clothes on their backs. https://t.co/eIOkx97RI4 pic.twitter.com/nVVRwTmDX7

“The drill, which is planned to last until November 25, was called to test the national chain of command’s swift response, according to the Estonian government,” Reuters details further.

“The reserve solders will assist in the installation of 40 kilometers of razor wire along the Russian border, where the dangers of unlawful crossings are greatest, according to a statement issued by Estonian police and border guard,” notes the report.

Since the collapse of the Soviet Union, Estonia and Russia relations have remained icy, particularly since tiny Estonia’s admission as a full member of NATO. Tensions also rise on occasions when Russian military planes fly near or into Estonian airspace, alerting NATO command.